World Record Mule Deer? 12-Year-Old’s Gross-217-Inch Typical Buck May Be the Biggest Ever Taken by a Female Archer

With a green net score of 205 and change, Jaydee Houston's Utah buck threatens the No. 3 typical velvet archery mule deer taken by any hunter, ever 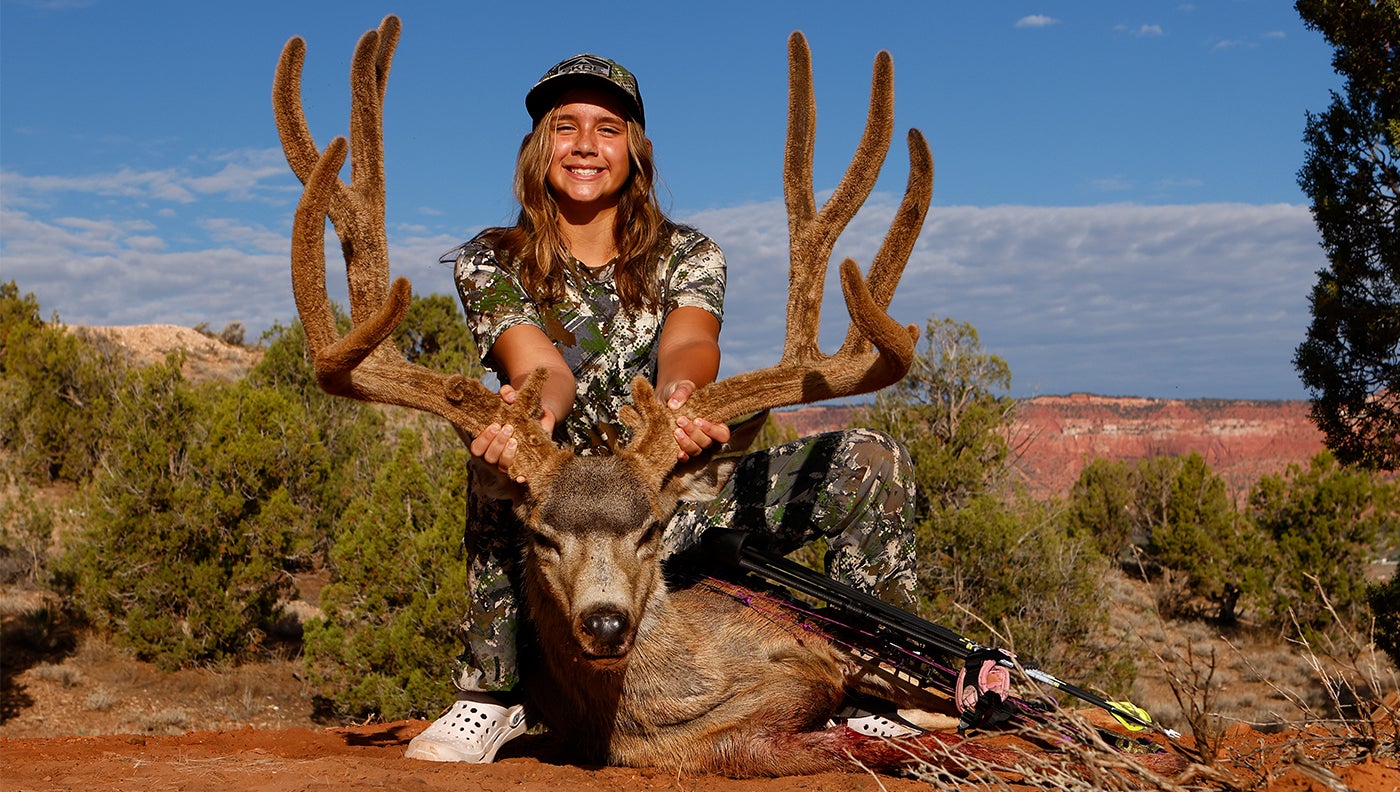 Not many pre-teen girls have killed a trophy mule deer, and even fewer have done it with archery gear. But when that muley could be the biggest velvet buck ever tagged by a female hunter, you’re entering some seriously rarefied air. Still, that’s exactly what Jaydee Houston did last month, when she made a 56-yard shot on a buck she and her father knew well.

The huge typical muley gross-scored 217 inches, with an unofficial green net score of roughly 205. If that score holds up, Houston’s buck could become the Pope and Young Club’s new No. 3 velvet typical muley taken by any bowhunter, behind the current world-record 218-5/8-inch giant taken by Bowdy Gardner in Utah in 2012 and the No. 2 at 209 1/8. Her buck will almost certainly be the largest typical mule deer, velvet or hard horn, ever taken by a female bowhunter, by a long shot. Because there is no specific category for female bowhunters, it will not be an official record. But anyone who wants to use the words “world record” to describe Houston’s buck won’t get an argument from us—whether you’re talking unofficial world record for female bowhunters or youth bowhunters or both.

The story of this incredible muley started on November 21, 2021. Jeremy Houston, Jadee’s father, is a passionate photographer of big mule deer, and he encountered the buck on the evening of that day. “I was roaming around in search of some rutting bucks to take pictures of and saw some does and a bigger-bodied deer with them,” he told F&S. “I pulled up my binocular and spotted one of the prettiest typicals I’d ever seen, and by far the biggest buck I’d seen that year. As a photographer specializing in mule deer, it was game on.” Over the next several days, Jeremy “hunted” the buck with his camera and came away with some great photos and even a video of an epic fight scene with the big typical and another buck. “But I thought that being able to hunt this buck for real was just a pipe dream,” he said, because the deer lived in one of Utah’s hardest-to-draw units.

But then in May of 2022, to the family’s utter shock, Jaydee’s mom, Holly, drew an archery tag for the premium unit. The family had planned all along that if Holly ever drew a tag before Jaydee turned 18, she would let Jaydee use it. The state of Utah has a hunting-mentor program that allows permit holders to share their permit with a youth hunter to give them an opportunity to hunt while in the field with the mentor. “To say that Jaydee was pumped would be an understatement,” said her dad, who shares the full story of Jaydee’s hunt, in his own words, below.

Jaydee has been shooting a bow since she was 3 or 4 and has always been out in the hills with me. She’s taken dozens of jackrabbits over the years with her bow and really has a knack for making some great shots. She had recently hit a little growth spurt and was shooting a hand-me-down bow from her older brother. So, it was time to go shopping. Terry Beck at TNT Archery in St. George, Utah, set her up with a new bow and accessories, and soon she was smoking ping-pong balls at his range. Throughout the summer we practiced shooting and hunted small game. She became pretty deadly, and we were extremely excited for the upcoming hunt.

In July, we began scouting hard for some potential bucks for Jadee to hunt on the opener. My nephew told us he’d seen a good-looking typical that could be the buck I’d seen the past November. I was amazed when I realized it was him. The buck had migrated 25 miles north of where he was in November and was hanging out with a bunch of other bucks. This bachelor group was feeding in several agriculture fields each night, and we were very fortunate to be good friends with several of the nearby property owners, who gladly gave us permission to hunt. Throughout the summer, we kept tabs on the buck and saw him frequently enough to get pictures and video. My good friend Brian worked in the area and was able to see the buck come and go on a regular basis, and he helped us nail down a good location to set up a ground blind about 35 yards off a heavily used trail, where Jaydee, Holly, and I could all sit together.

On our first evening in the blind, we had several does and bucks come by, but not the big guy. Our luck would change the next evening, when, with only an hour of light left, I spotted him. “Holy cow, there he is!” I whispered to Holly and Jaydee. I ranged the buck at 573 yards away. But with shooting time dwindling, the anticipation was killing us as we watched him, along with a few other bucks and does, slowly zig and zag their way toward us. We’d gone through every scenario if he made it to us before dark. We basically had two shooting lanes and both would provide a 30- to 60-yard shot. The plan was for Jaydee to pull back as soon as he jumped a fence and approached the first shooting lane. I would then try to stop him with a soft mouth call and range him. She would then zip an arrow through his vitals. But the buck was taking what seemed like forever, and there was a minor three-way panic attack happening in the blind.

With 15 minutes of light left, the deer finally made a move towards the field, covering 200 yards in just a matter of minutes. A doe was in the lead, then a smaller buck, and then the big boy. As he jumped the fence, Jaydee drew her bow, and I stopped him just as he walked into the first lane. “Fifty-six yards” I whispered to Jaydee. The buck was perfectly broadside and looking intently into the blind. A few seconds, which seemed like eternity, passed, and I thought to myself, Why hasn’t she shot?

I hadn’t taken the darkness inside the ground blind into account. I figured our chances were over as the buck turned and walked toward the field. I was looking down at my feet when Jaydee suddenly shot! I heard an unmistakeable thwack of an arrow hitting home, and I was practically in shock when Holly said “She for sure hit him!”

Jaydee explained that she’d finally been able to see her sight, settled the 60-yard pin on the buck, and took the shot. We basically had the whole family waiting and watching from a nearby road. Brian said they were able to see the buck as he ran off and bedded down in some tall sage, no more than 200 yards from the blind. Not sure of the location of the hit, we gave the buck an hour before we headed out with lights to search.

After a short track job, I was standing over the buck, hooting and hollering like only a dad can when one of his kids accomplishes something incredible. She made a great shot that put the buck down quickly. As Jaydee and the others came over, I pulled out my phone and to video everyone’s reactions. Jaydee was so pumped and kept yelling , “Let’s go!” It was so awesome. I will never tire of watching all the excitement of everyone coming over to perhaps one of the biggest bucks ever harvested by a woman, let alone a 12-year-old girl with a bow and arrow.