The Blessing of a Child’s First Deer

Thanks to his uncle's very creative approach to getting past his fear of recoil, this 10-year-old was cool and confident on the gun during his first whitetail hunt 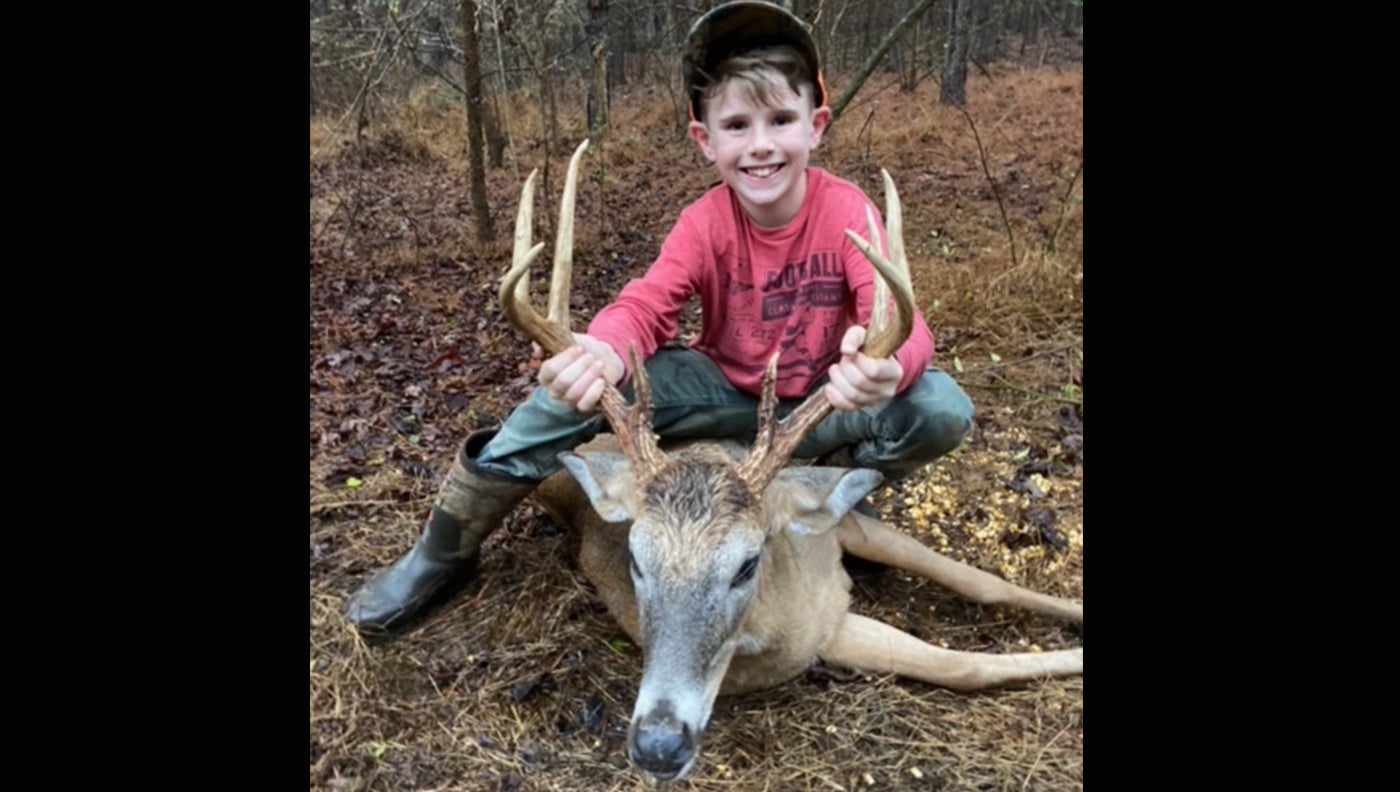 “On the opening day of dove season,” Robert Edwards, a.k.a. Uncle Red, told me, “Boyd was so terrified of the recoil that he taped a full-size bath towel around his shoulder. I bet he used half a roll of duct tape. It took us 30 minutes to cut it off. But the worst thing you can do for a kid is tell him to buck up and just take it. It’ll haunt him for life.”

Robert is a long-time friend of mine, and a diehard hunter. He and his brother, Patrick—Boyd’s father—are fourth-generation farmers in eastern North Carolina. This time of year, photos of smiling faces and downed deer are zipping around the social media-sphere, as hunters share pics of the biggest deer and even smaller bucks and does with a heartwarming story behind them. And this is the story behind one of those photos, which Robert sent to me just a couple days ago. As you can see, there’s a pretty cute kid in it, and a pretty big deer. But it’s an even bigger big deer story.

An Inventive Cure to Recoil Fright

Uncle Red’s plan was to get Boyd over the hump of his fear of recoil, but he knew it would take some doing. His first step was to pull out of storage a .22-250 that had never been shot. Its recoil was pretty tame, Uncle Red thought. It just might work. He cleaned the rifle’s bore, outfitted it with a new scope, and sighted it in. The next step was going to be trickier.

Uncle Red knew that his nephew held him in high regard, and figured that if he could personally demonstrate to Boyd how little recoil the rifle produced, he would win the day. So he took the youngster out to his shooting shed, and shared his plan. “I said, ‘Boyd, I’m going to prove to you how little this gun kicks,’” Robert told me. “’I going to put this gun right here on my crotch. You see that? And now I’m going to shoot it one-handed.’”

Boyd’s eyes were big as pie plates. And Uncle Red did what he said he was going to do. When the gun’s muzzle blast had faded away, Uncle Red turned to his nephew. “So what do you think?” he asked.

Boyd had a wide grin. “Uncle Red,” he replied, “I think I could shoot that deer rifle.”

The barn is out back of the house, meagerly clad in peeling red paint, one of those old farm structures that make you think of mules and musty leather and black-and-white photographs of wiry men at work. Uncle Red Boyd, and Boyd’s little brother, Fielding, clambered into the second-floor loft where Uncle Red had cut a shooting window 35 years ago. It looked down a wide shooting lane, hemmed in with pines. Boyd practiced resting the rifle on the edge of the cutout, practicing his hold just like Uncle Red told him to.

The first deer that walked out was a four-point buck. “I thought, What a lucky little man to shoot a buck for his first deer,” Uncle Red told me. But the little buck never gave Boyd a shot. It walked down the shooting lane, and out of sight.

Boyd was disappointed, but undaunted. And he was also ready. So when a tall-tined 11-pointer walked out 20 minutes later, Boyd never faltered. He would later tell his father and uncle that he looked at the deer’s antlers once, and once only. “I focused on the shooting spot,” he said, “just like Uncle Red told me to.”

Robert was at his side, coaching his nephew, and making sure Boyd kept the safety on until he was ready to shoot. Boyd’s shot broke both the buck’s shoulders and dropped him in his tracks. In a smart-phone video taken during the shot, you can see what happens next in the old family farm barn.

And a blessing it is for all of us to get these deer photos, that appear unbidden in our text messages and emails, from friends and family near and far. There’s a lot behind these captured moments. Some of them arrive with messages of astonishment. Others are the product of hard work and long hours in the deer woods. Who wouldn’t be proud of a kid who just dropped a whopper 11-pointer with his first-ever shot at a deer? And some of the photos amount to good old-fashioned bragging. There’s nothing wrong with a bit of that.

But most of these photos arrive with a deeper subtext, be it nuanced and subtle. They’re a way of acknowledging how hunting ties us together. They commemorate the shared thrills and awe that even today there are those of us who return to the woods each year to dip our gourds in a well of wildness and renewal. They’re a way of marking each other as one of the same tribe: This is who we are—part of a long line of hunters, stretching into past and future.

Welcome to that family, Boyd Edwards. And thanks, Uncle Red. Your shot was no less impressive than your nephew’s.