If You Axed Me, I Would Answer Brant & Cochran 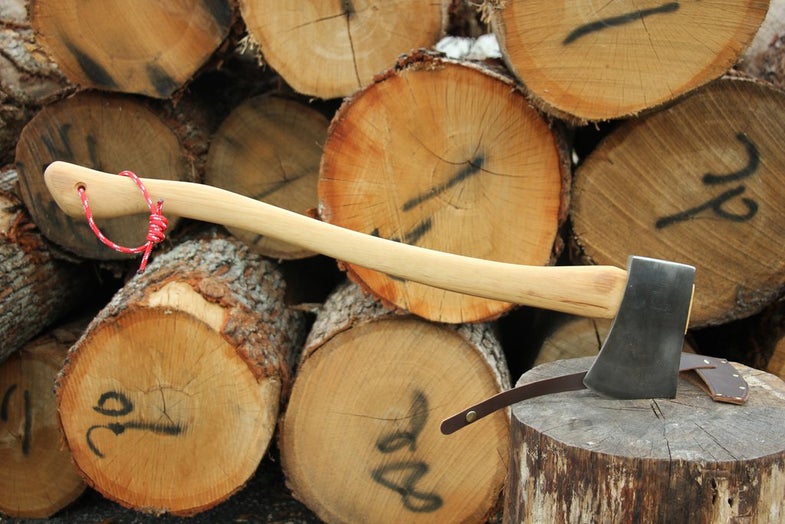 I don’t think I’ve ever been on a serious hunt where there was not an axe along. This has been the case as long as there were humans around to go on serious hunts. The earliest flint axes date to 1.4 million years ago, and were found at Lake Turkana in Kenya. People got along with these until 400,000 years ago in what is now northern France, when some lithic artist said, “Aujourd’hui je pense que je vais inventer le couteau,” and produced the first knife.

But axes remained indispensible. In America, the first axe forge was established at the Jamestown colony in 1620. Our colonial forebears realized that there were immense forests to be felled for firewood, and colonial furniture, and bonfires for roasting witches, so they went to work.

In Maine there was the timber industry. Well into the 20th century, the aroma of pine was replaced by the stench of pulp mills (and I can remember those stenches from the 1950s; you could smell them for miles) and subsequently, the axe industry. In Maine, between 1800 and 1960, there were more than 300 axe manufacturers. The epicenter was the town of Oakland, which had only 2,000 inhabitants and a dozen axe factories.

Throughout the United States, there were more than 400 axe patterns. In the 1920s, in order to bring some kind of sanity to all this, the number of standard patterns was set at 40.

Then the timber industry tanked and the song of the chainsaw was heard in the land and all the axe makers vanished. If you wanted a really first-rate chopper, you had to turn to the Swedes, Gränsfors Bruk and Hultafors.

However, that has now changed. Late in 2016, a trio of axe-addicted Mainers founded Brant & Cochran (none of them is named Brant or Cochran) in Portland, a city once peopled by sailors and whores and lumberjacks, many of whom could not be told apart.

B&C can do a number of things for you, assuming you deserve to have something done for you and you pay them money to do it.

They will sell you a very nicely made leather axe sheath, either double-bit or single bit, or a diamond-grit hockey-puck-style sharpening stone, which I think I will get.

If you have a nice old axe which has seen much better days, and assuming it’s a good one and worth the work and expense, they will refurbish it to a fare-thee-well. Some old axes are too rusted out, or have polls that are too weak, or edges that are too soft because they were never hard enough in the first place, or because they were sharpened on a power grinder. B&C will clean up the head, re-sharpen it, hang a new ash handle, and equip it with a sheath. Most restorations run $75 to $100 and take about two weeks.

Or, they will sell you a reconditioned axe from the Golden Era of axe making. Most of these run in the $230–$280 range, and lovely things they are. B&C is the only source I know of for double-bit axes that are designed for chopping, not throwing.

Or, in the spring, B&C will debut the Allagash Cruiser axe, which they build from scratch, and which is based on several years of research at the Lumberman’s Museum in Patten, Maine. It’s described as simple, unadorned, and primitive looking, which is also a fair description of Patten, Maine.

Their website is a gold mine of axe lore and information. In the meanwhile, here is some axe trivia:

• Chainsaws can do in seconds what takes an axe many minutes of hard work. However, axes always start, do not need continual adjustment, make hardly any noise, never run out of gas, and will not whip up and catch you across the mouth, requiring reconstructive surgery, as happened to a tree surgeon I know.

• For every 15 minutes you chop, you should spend 5 minutes sharpening.

• If you look at old photos, you’ll notice that loggers were not huge and muscular, but lean and wiry. That’s because felling a tree is all endurance, not strength.

• Logging was stupendously dangerous. The most perilous job of all was riding logs downriver after they had been cut and prying jams apart with a peavey pole. If you slipped, you’d be either crushed or drowned.

• If you’d really like to get in the spirit of things, you can order a pair of White’s Roughcut Logger Style #75G boots, which are the only boots made with “calks” (which I always heard pronounced “corks”). These are replaceable steel spikes that provide the only sure traction on wet logs. The price is $550, and if you walk on wet logs a lot, they’re a good investment.

• Calks were also useful in bar fights, according to old-timers. They produced what was called “loggers’ smallpox.” I leave the rest to your imagination.