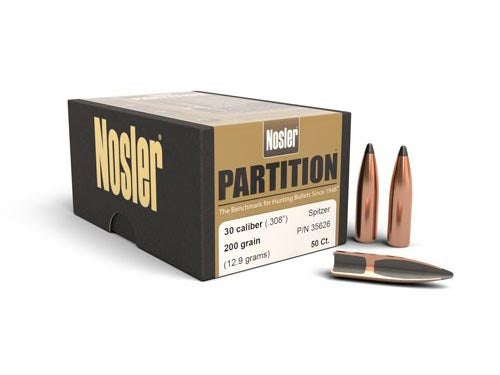 Those of you who are observant, or who have not recently looked at a picture of Olivia Wilde and had your brain fried, may have noticed that one of the loads I tested for my post on the Nosler Mountain Carbon rifle used 200-grain Nosler Partition bullets. This is because a strong, 200-grain bullet in a .30/06 is one of the most effective droppers of big game in anyone’s arsenal, and it’s also one of the most ignored. If I were doing my hunting all over, I would do a lot less of it with the .338 and a lot more with an ’06 loaded with heavy bullets.

I think for a general-purpose load, the best ’06 slug is either a 180-grain Swift Scirocco II (if you’re into the long-range madness) or the 180-grain Nosler Partition Protected Point, which is highly non-aerodynamic, but which I’ve used a lot, and has an eerie ability to make animals fall down right away, never to rise again.

There are four 200-grain .308-diamteer bullets that will work in any .30-caliber rifle, but when you load them in an ’06, you take it into another dimension. They are, not in any kind of order, the Barnes X-Bullet, the Nosler Partition, the Swift A-Frame, and the Trophy Bonded Bear Claw. They are force magnifiers. All of them are spitzers. All are very long, have high sectional density, are built for strength, and offer enough penetration and brute force to take down anything.

Hardly any attention has been paid to them by ammo makers. Nosler has a 200-grain ’06 load, but it’s the Accu-Bond, which is not nearly as tough as the Partition. Federal offers the 200-grain Trophy Bonded in its ’06 line, and that’s about it.

There are 220-grain loads, and both Federal and Remington offer them. However, the bullets they use are not remotely in a league with the four I’ve listed above. Bullet weight, and length, and caliber, by themselves, do not guarantee bullet strength. Back in the Era of Rotten Bullets I saw no shortage of big, heavy slugs that flew to pieces.

If you handload, you can expect muzzle velocities of 2,500 to 2,600 fps from a 200-grain bullet. And despite this comparatively low speed, they shoot flatter than you’d expect because they have decent ballistic coefficients and lots and lots of momentum.

A 9-pound .338, shooting 250-grain bullets at the same speed, honors you with 34 foot pounds, which is edging up into .375 H&H territory. If you’re in a situation where you fire more than one shot on the hunt say, on safari, that 11-foot-pound difference is going to loom very large after a while.

Possibly, the 200-grain has been ignored because the ’06 does so well with so many other bullet weights. But if I were after something large, or if I were hunting caribou in grizzly country, or going to Africa, or any of a half-dozen other scenarios, I’d look very hard at that 200-grain bullet, and if I didn’t handload, I’d get on friendly terms someone who did.