In Praise of the Hornady ELD-X Bullet

Accurate enough for competition shooting, the ELD-X is also devastating on game 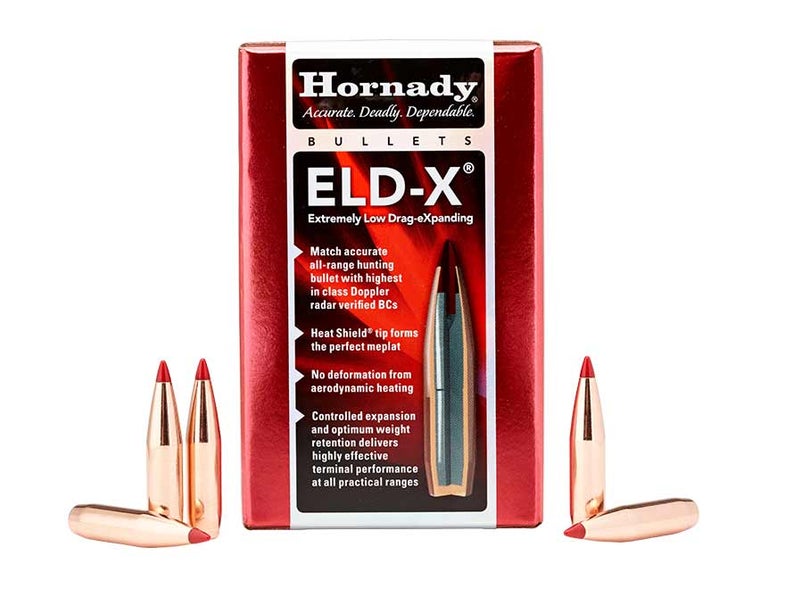 On my aforementioned mule deer hunt in Montana, I got to see how Hornady ELD-X bullets perform on game. ELD stands for Extremely Low Drag, while X stands for expanding. They’re one of a new kind of bullet that has been proliferating since Nosler introduced the Ballistic Tip in 1984.

The Ballistic Tip is a long-range hunting bullet that has much in common with target bullets. It is boat-tailed, has a long ogive, and has what I think is the very first ballistic nylon tip ever used on a rifle slug. The polymer doesn’t melt from air friction as do lead meplats, and enables the bullet to retain its form on its trip to the target. Ballistic Tips are exceedingly accurate, and are quick expanders.

ELD-X bullets are similar. In addition, they’re very heavy for their diameter (in 6.5mm, which is what I handload, they scale 143 grains.) and have a G1 ballistic coefficient of .625. or a G7 BC of .315.* This means that they retain their velocity even when started out at moderate speeds; they also shoot very flat and buck the wind extremely well. ELD-Xs shoot so accurately that you could use them in competition. My Savage 6.5CM likes them better than anything else, and I have lots and lots in the basement, which gives me a warm gooey feeling.

Chad Schearer, who is a Montana guide and hunter of vast experience, uses a Bergara Approach 6.5CM as a loaner gun, and he and his sons use it as well. He shoots Hornady Precision Hunter ammo in it, and when he let me use the rifle for an eating-type mule deer, I got to put the ELD-X to use on game.

By and by, we came across a big, fat buck whose genes were not suitable for passing along, and who had been into the alfalfa but good, and from 129 yards I placed an ELD-X in his rib cage on the right side, with him angling away just slightly. He ran a few yards, did the funky chicken, and went down, never to rise again. The bullet had ranged forward and across his chest cavity, demolishing both lungs and his heart. It didn’t penetrate through and through, but so what? You can’t argue with dead.

That evening, Chad went out with one of his sons to lie in wait for a very nice whitetail buck that we’d watched work a scrape line in the morning. At twilight, the deer emerged from his bed, and I got to watch what happened on video, or whatever it’s called. You see the deer ambling downhill checking for interesting scents. He pauses for an instant and then simply vanishes. The ELD-X hit him at a shade over 300 yards, and he never moved out of his tracks. This bullet was not a through and through either, and again, who cares?

The more I see of it, the more the hoo-hah over the 6.5CM makes itself justified. And the ELD-X bullet in that caliber, on targets or animals, will do whatever you want to perfection.

*Check in later this week for an explanation of BCs in a subsequent blog.