Is It the Twilight of the Riot Gun?

Not quite. But some police departments are swapping out the tactical shotgun in favor of a suppressed M4 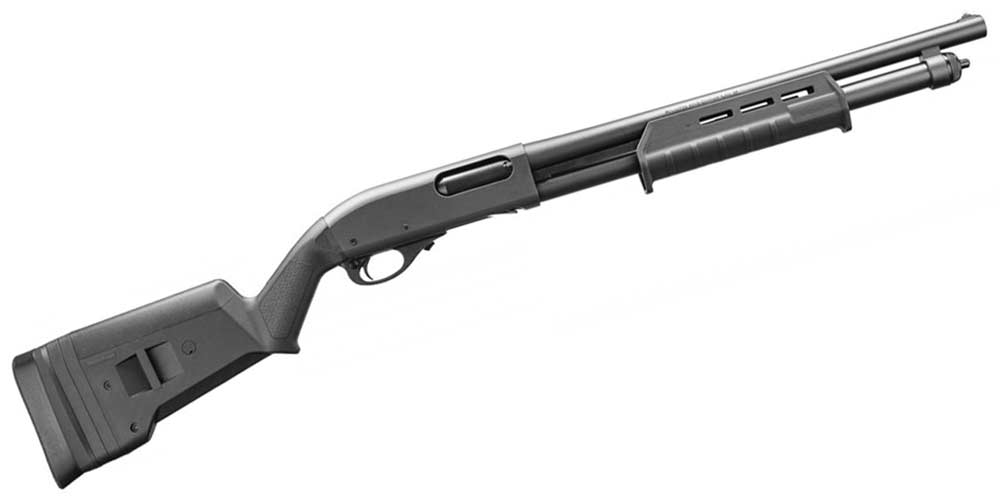 It’s long been known that one of the most effective means of shooting people is a short-barreled, large-bore shotgun. The first such firearm, the blunderbuss, was already well established in the 17th century. (“Blunderbuss” is Dutch for “Maybe you better rethink this.”) In the Old West, shotguns were widely beloved of stagecoach guards (“riding shotgun”) because they gave you a halfway decent chance of hitting a moving target from a bouncing platform that was also moving forward at 25 mph.

In World War I, when trench raids became the fashion, the American Expeditionary Force looked for a weapon that would be better at very close quarters than an 03 Springfield with fixed bayonet. They settled on the 12-gauge Winchester Model 1907 pump gun with a 20-inch barrel, a handguard, and a mounting stud for a bayonet. It was called a trench gun, was very effective, and the Germans took time off from perfecting the flamethrower and poison gas to write the Americans that they regarded it as inhumane and would summarily execute any Yank caught with one.

After the War to End All Wars, the short-barreled 12-gauge pump gun (now called a riot gun, because it was recommended for putting down riots) became a staple of police departments. In the era of ineffective .38 Special revolvers, there was hardly a cop car rolling that did not have a riot gun locked in the center console.

But this may be changing. The club where I shoot has two dedicated police ranges, one for handguns and the other for rifles. All sorts of departments practice there, and in months of casual watching, I couldn’t recall any officer shooting a handgun from farther than 10 yards, and I could not recall hearing the mellifluous boom of a riot gun.

So I asked a retired officer friend of mine, who in turn asked a tactical marksmanship instructor, if this marked a change in tactics, and he was told that indeed, many departments are phasing out the riot gun in favor of suppressed M4s, while the handgun is being relegated to use at powder-burn range.

The suppressed M4, the shooting instructor said, is superior to the riot gun in terms of range, ability to defeat body armor, accuracy, ammo capacity, and lack of recoil. In addition, the suppressor provides a major advantage in an indoor shooting situation, or one where a lot of people are involved. With non-suppressed guns, the noise is deafening, and people tend to shoot “sympathetically”—you hear a thunderclap nearby and you send a burst toward it as a reflex. But with all the good guys shooting suppressed, anyone who goes bang instead of pop will mark himself as a bad guy, and be treated accordingly. Finally, M4 bullets do not disperse and hit innocent bystanders, as buckshot can.

The riot gun is not about to go away. It’s still highly popular, and the military still issues it (although probably more for breeching than for shooting people). Riot guns are now being made in all sorts of new configurations in order to increase their capacity, and are given rails on which to mount flashlights, lasers, Forward Looking Infrared Radar, motion sensors, night sights, and all the rest of it.

If I were to be hauled before a jury for a home-defense shooting, I would much rather have done it with a short-barreled pump than a Powerful Assault Rifle. A district attorney who doesn’t like PARs is going to have a wonderful time at your expense if you used a PAR.*

* Speaking of expense, a retired-judge friend of mine tells me that if you do have to defend yourself in court on a defense-shooting charge, your legal bill will come to something like $100,000.