Bismuth shot is back yet again. This year, Kent Cartridge has its own version of the non-toxic shot, following up... 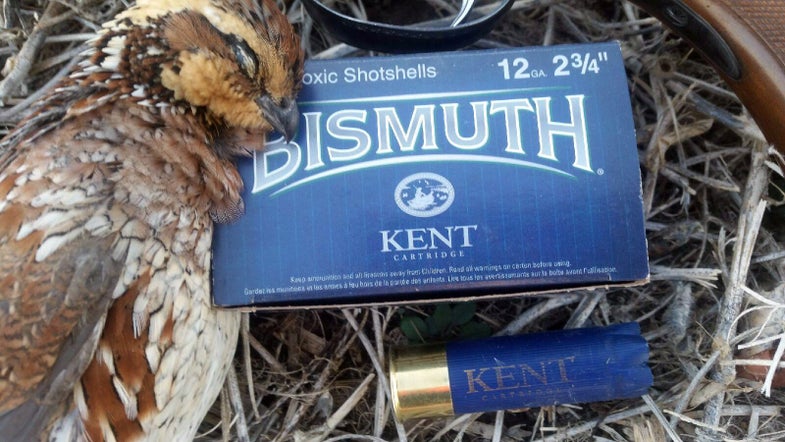 Bismuth shot is back yet again. This year, Kent Cartridge has its own version of the non-toxic shot, following up on Rio Ammunition’s 2013 reintroduction of bismuth years after it vanished from the marketplace. Bismuth was developed in the 90s as an alternative to steel shot. It is the active ingredient in Pepto Bismol, and, when alloyed with tin, it makes a shotgun pellet that is almost as dense as lead, non-toxic, safe in old guns and, as a bonus, breaks apart between your teeth when you bite it at the dinner table.

Bismuth shot was first sold in the U.S. by the Bismuth Cartridge Company, then by Winchester, then under the Bis-Maxx brand, then founder Bob Peterson died in 2007 and bismuth went away as HeviShot, Kent Tungsten-Matrix, and other non-toxics dominated the premium non-toxic market. However, the price of raw tungsten has risen precipitously while bismuth prices remain fairly stable, making bismuth a more competitive option.

So, Kent, known for its Tungsten-Matrix shot and for Fasteel, jumped into the bismuth market. They are making bismuth pellets by their own proprietary process which, they claim, is less frangible than the Rio stuff. It also costs less. Bismuth shot will never be cheap, but a couple of the new Kent loads have a street price under $2 per shell, which, for premium non-toxics, is a deal and undercuts Rio by a few dollars a box.

Like all Kent ammo, it is good looking and attractively packaged, too. If you switch from lead to bismuth you can use the same chokes and expect similar patterns. So far I’ve only had the chance to shoot a couple of roosters and this bobwhite, but all the pellets I took out of the pheasants were round and intact, unlike every other iteration of bismuth shot, which often broke up against bone. It does still grind up between your teeth, making it a good pellet to shoot at birds you plan to serve to non-hunters, who are freaked out by biting hard lead and steel pellets.

The new Kent bismuth ammo comes in 2 ¾ and 3-inch 12 gauge and 16, 20 (2 ¾-inch only) and 28 gauge in sizes 4, 5, and 6. For some reason, making big bismuth pellets is difficult, or pricey, because neither Kent nor Rio offers anything bigger than 4 shot (Rio has a European 3 that is the same size as our 4s) so these aren’t goose loads. But, for duck hunters or upland hunters in non-toxic only areas, Kent’s new bismuth ammo makes a welcome choice.