Sooner or later, you’ll be faced with a long shot. Are you truly ready for it? 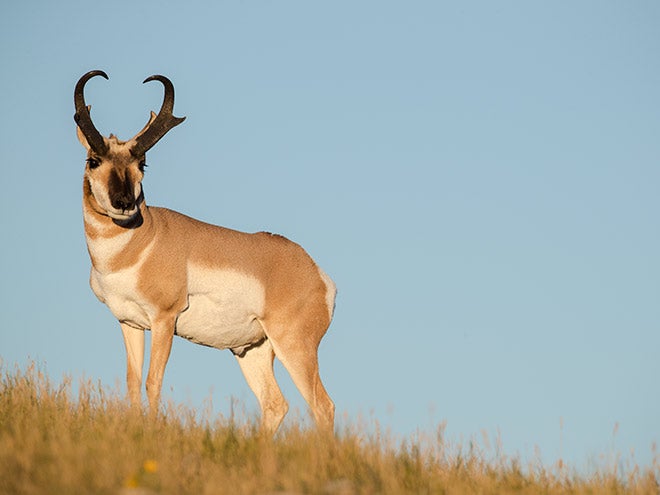 My answer seemed reasonable to me. But I recognized the change in the outfitter’s tone the instant he responded. It was the same disappointed, authoritative voice I took with my toddler when he didn’t pick up his toys before bath time.

Long shots were the conversation theme of the week. This was a post-rut combo hunt for elk and mule deer, and so we spent a lot of our time glassing distant meadows, waiting for something to step out. As we waited, the guides regaled me with tales of bulls killed at 600 and 700 yards. I wondered how every successful client they had was so practiced at long-range shooting when I didn’t even know where the nearest 500-yard range was back home. But those stories had another theme: lots of bullets in the air.

On the third morning of the hunt, I was sitting by myself and glassing a meadow when a stud of a mule deer buck stood from his bed. With no easy way to move closer, I ranged him at 480 yards. I dialed the scope up to 16X, picked the appropriate ballistic reticle for the distance (this was before custom turrets were common on hunting scopes), and began to settle in for the shot.

Western Kentucky, where I grew up and still live, is critter-rich farm country with a mix of wide open cropfields and thick cover. I’ve been hunting here since I was 7 years old. My career has also allowed me to travel and hunt all over this country (and a few others) for a myriad of species.

I’ve filled a lot of tags in that time. I’ve also watched other outdoor writers, hunting television personalities, industry representatives, guides, and countless friends and family members shoot in the field. All told, I’ve seen hundreds of shots at big game with arrows and bullets, most from very good hunters. So I say this with conviction: Rifle shots beyond 250 yards and bow shots beyond 30 yards usually turn into fiascoes. Plenty of them end with filled tags, but few of them do it with one clean shot.

To be fair, there are a handful of hunters who are capable of consistently making long shots. Jump into a discussion (or debate) on the topic, and it’s especially common for a western hunter to chime in and say, “We take long shots out here all the time.”

Western hunters generally seem more comfortable with long shots than eastern hunters. They get more practice on average, but a lot of western terrain is more conducive to long-range success, too. You can see farther in the wide open spaces, but less often mentioned is the fact that you’re probably going to get a follow-up shot—and maybe several—if you miss the first one. If you make a bad hit, you can often watch the animal through binoculars and devise a plan for a coup de grâce. As I said, the tag gets filled. But it’s not always pretty.

In the East, a long shot will be across a beanfield bordering a hellish thicket. A buck that shows himself can vanish in three steps. One crack is probably all you’ll get—and if you hit him poorly, you’ll have to find and follow blood. Climbing out of a stand and walking 300 yards to precisely where a deer was standing and then locating eraser-size drops of blood in a thicket with a flashlight is just as easy as it sounds. And if the buck’s not dead, don’t count on a follow-up shot.

Regardless of whether you live in Colorado or the Carolinas, you may be one of the few who are truly lethal at long range. But if you’re like most of us, you’re better off getting closer or waiting.

Back to the Hunt

I had every bit of confidence in the gun, the load, and the scope. I’d been told all week that 500 yards should be easy. But as my finger settled on the trigger, the gun moved, imperceptibly on my end, but 480 yards away, it caused the reticle to jump from the buck’s lungs to the backstrap to the guts and back again. I hesitated and thought to myself, This is too damn far. Seconds later, the buck vanished.

I came home without killing a deer or an elk, and I was disappointed. But there’s a real difference between disappointment and regret.

I wrote this story several years ago, right after Winchester introduced their Expedition Big Game line of long-range performance hunting ammo. Though I didn’t get an elk or buck on that hunt, I have used the ammo extensively on hunts since then, including on a big Alberta moose with a .300 WSM, and one of my largest Tennessee whitetails ever, out of a .300 Win Mag. It’s still great stuff. The line uses Nosler AccuBond bullets that are a little heavy for the caliber, and made to buck the wind, penetrate deeply, and expand reliably from afar. They work. I’ve also since become a little more practiced at long-range shooting. Last spring I killed an aoudad at just over 400 yards. But did a single deadly hit do the trick? Nope. I missed him the first shot, adjusted my scope, and killed him with the second. What I’ve continued to see, over and again, are the same long-range shooting fiascos on game that I referenced years ago. For most hunters, 250 yards remains a long poke with a rifle, and 30 yards is still about the limit with a compound bow. Bottom line, you’ll be more successful and sleep better at night if you’ll just get closer. —W.B.