In theory, the perfect big-game bullet would fly dead flat, expand to double its unfired diameter on impact, penetrate just... 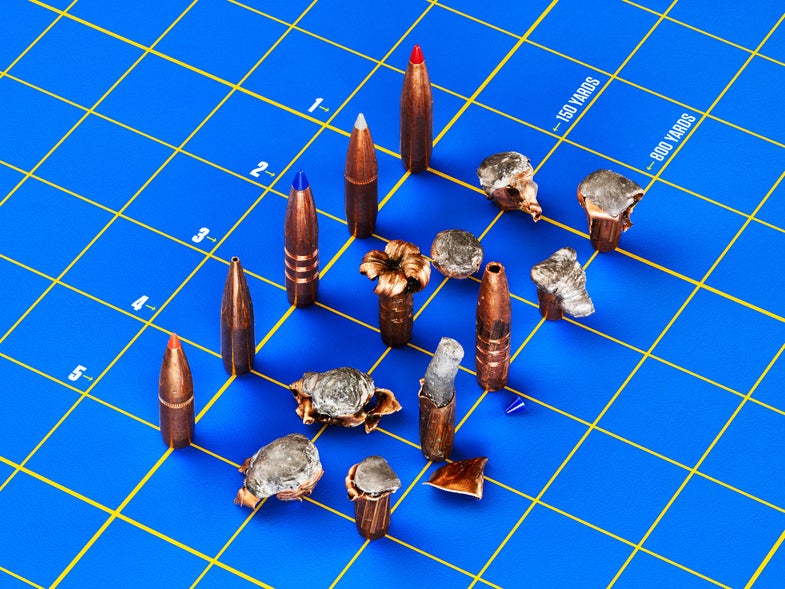 In theory, the perfect big-game bullet would fly dead flat, expand to double its unfired diameter on impact, penetrate just through the far side of every critter, and then drop straight to the ground, having spent all its energy on tissue damage. And it would do this as perfectly at 800 yards as at 80.

Of all the challenges this presents to bullet makers, the key one, given our current long-range craze, is the last. As a general rule, a bullet’s ability to expand and damage tissue decreases as it slows. It’s one thing to mitigate this problem out to 300 or 400 yards, as some manufacturers have through better bullet construction. It’s quite another when those distances double.

With 21st-century riflemen shooting to previously unthinkable ranges, the bullet maker’s challenge in the new millennium is to design projectiles that shoot as flat as possible, that are minimally affected by wind, and that deliver deadly performance from the muzzle out as far as you can make a good hit.

In reality, the perfect bullet not only doesn’t exist—it can’t. The laws of physics prevent it. But that hasn’t kept makers from chasing the ideal. So in an effort to find the modern big-game bullet that gets the closest to perfection, I used Hornady’s ballistic laboratory to test five .30-caliber hunting projectiles at .300 Win. Mag. velocities. There, Doppler radar measured flight consistency (from shot to shot) and bullet velocity from the muzzle to 800 yards. I also fired each bullet into ballistic gelatin at 150 and 800 yards to gauge expansion and penetration. The listed scores are out of a possible 100, based on a comparison with our theoretically perfect bullet.

I’ve seen the ELD-X in action on big game to 700 yards. It is impressive. The bullet has a radically tapered jacket, an internal lock, and a new tip designed to increase flight consistency. It is only loaded in Hornady Precision Hunter ammunition.

Comments: Hornady let me use its lab based on its confidence in how this bullet would perform—and that trust wasn’t misplaced. The company had no influence on my testing or the results. The ELD-X’s top-ranking flight consistency, and near identical performance at 150 and 800 yards, earned it the top spot.

The AccuBond has proved to be a stone-cold killer inside 500 yards. The LR is engineered to fly flatter, and it is bonded to help keep it together. It’s available in loaded ammunition from Nosler.

Comments: Expansion at 150 and 800 yards was amazingly identical, if moderate, and the AccuBond LR retained velocity reasonably well. It had the least consistent flight of any bullet tested, but the difference from best to worst was slight. And it produced the deepest straight-line penetration at 800 yards.

I’ve used LRX bullets at common hunting distances with great success in North America and Africa. This is an all-copper boattail bullet, with a plastic tip to initiate expansion and flatten trajectory. Barnes offers them in its VOR-TX line of ammunition.

Comments: The LRX could not have performed better at 150 yards. Impacting the 800-yard target at 1666 fps, however, it exhibited no expansion and tumbled through the gel block. Solid copper bullets typically need to impact at 2000 fps or faster to show significant expansion.

During a hunt in New Zealand, my party took almost 50 big-game animals using VLDs. We had no complaints, and some shots were beyond 500 yards. All Berger bullets are known for accuracy. The Hunting Shack offers VLDs in some loaded ammunition; otherwise they are for handloaders.

Comments: In the short-range test, penetration was a bit shallow, but the VLD expanded wide and created a wicked wound cavity. Flight consistency was very high. However, the VLD failed to expand at 800 yards and tumbled through the gel.

I’ve seen great things from SST bullets on various big-game animals inside 400 yards. Prior to 2016, this was Hornady’s long-range hunting bullet. It is a conventional design with a plastic tip. Hornady offers a wide selection of ammo loaded with SSTs, and in Remington ammunition this bullet is known as the AccuTip.

Comments: Expansion at 150 yards was impressive, which limited penetration somewhat. At 800 yards the SST tumbled after impact, which caused the plastic tip to shear and the nose to smear in a way that looked like expansion but wasn’t.