Ice fishing tips to keep your baits in the strike zone all winter. 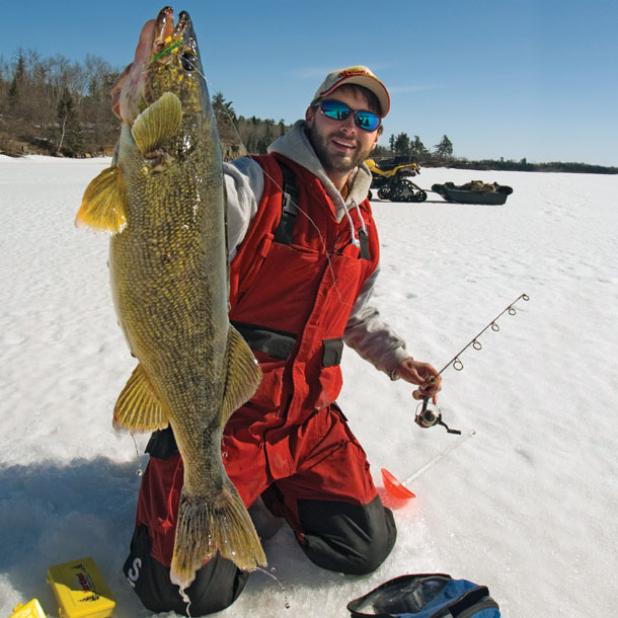 When winter’s ice seals waters, the puzzle of finding fish does not change. Unfortunately, the approach used by many ice fishermen often does little to solve that puzzle. Sitting in a shanty or watching the same tip-ups all day, waiting for the action to start, leads to a long winter with few fish.

Pioneering ice fishermen like Dave Genz––a Minnesota angler who has developed many strategies now commonly in use, such as being mobile on the ice instead of fishing one spot all day––have refined several new approaches. The following four tactics are the latest and best in use on the ice today.

1. Flash Some Football Fields with Your Depth Finder

Just like when you’re fishing from a boat in open water, you should keep moving and looking with your depth finder until you find fish. It’s possible to shoot the sonar signal through clear ice without having to drill a hole, but usually a hole is necessary for a look.

A flasher rigged with a specialized downward-pointing transducer that levels itself in the hole is the tool of choice (LCD displays don’t always perform well in very cold conditions, and there is a lag time between lure action and display on the LCD). Two people can work together to search large areas: one drills in a zigzag pattern; one comes behind and checks each hole with the flasher.

Genz walks from hole to hole, looking for fish, and he rocks the transducer in various directions so the sonar signal looks out to all sides. That reveals any fish to the side of a hole as well as directly beneath it.

For scouting, Genz takes what he calls a “football field and tennis court” approach. This calls for drilling a few holes in an area the size of a football field and searching. If you don’t find fish, you move to the next football field-size area and repeat. But if you flash a few fish at a field, drill some holes there in a tennis court-size area and jig those holes until you pinpoint a concentration of biting fish. It’s important to resist the temptation to set out tip-ups until you’re sure that you’ve found active fish. Tip-ups can be anchors that prevent you from staying on biters, ­especially at midday.

2. Keep Moving Until You Find a Sticky Bottom Layer

The underexplored ­frontiers on most lakes are “sticky bottom” areas, says Genz. It’s well known that shallow, weedy areas are often productive, particularly earlier in the winter; but later on, fish tend to be more active in deeper water.

The bottom composition of a “sticky” area is not too hard, not too soft–just right for burrowing insects, which attract forage and other fish. Look on lake depth charts for areas where contour lines are rela­tively far apart in the mid-depths of 15 to 30 feet.

It takes a leap of faith to leave those shallow, weedy areas and go out over mid-depth flats to look for fish. You probably won’t see other anglers. You have to be confident, and you may have to drill a lot of holes before you find any fish. But when you do, they’re often the biggest ones around.

Pinpoint sticky-bottom areas by drilling a few holes in the middle of a mid-depth flat. Clip a weight to your jig and let it drop to bottom. Then lift up. If the weight bounces quickly or digs deeply, look elsewhere. But if it clings to the bottom temporarily, the composition is probably right.

Underwater cameras take more time to use in each hole than depth finders do, but they clearly show bottom composition. You can sometimes even see evidence of burrowing insects–tiny holes or raised lips on the bottom–and you might even see perch and other fish rooting around.

Once you find a sticky bottom, it’s worth your while to drill along the base of any steeper drop offs that lead to the flat. “Sediment slides down those steep breaks and settles at the base,” explains Genz. “That creates perfect places for burrowing insects.”

3. Look for Depressions on a Detailed Contour Map

Depressions in large bays are also consistent winter hotspots overlooked by most ice fishermen. These 1- to 4-foot-deep holes vary in size from one-car garage up to several football fields across. Many feature a sticky-bottom composition, providing food, warmer water, and favored light levels for fish. “Depressions, even if they’re just a little deeper than the rest of the bay,” Genz points out, “are great at midwinter.”

Mapping software from Lakemaster (lakemap.com) and Navionics (navionics.com) can be used in a wide range of GPS units to show detailed depth contours for many lakes, allowing you to drill your holes over exact locations.

4. Keep Your Jig Moving to Call in More Fish with Vibration

There’s something about rapid vibrations imparted to a jig that draws fish under ice. Genz has perfected a method he calls pounding. The key is to rapidly yet subtly vibrate your wrist so that your wrist moves no more than 1⁄8 inch, causing the jig to vibrate. At the same time, raise and then lower your rod a couple of feet in a slow and smooth fashion. Your jig will appear to have the action of a bucking bronco, with the hook end kicking higher than the head. Slide your knot toward the hook end of the eyelet; your jig will hang horizontally, enhancing the kicking motion. This presentation makes the jig look alive and is effective on walleyes, bass, perch, crappies, bluegills, and other species.

In clear water, begin pounding before your bait has lowered into the fish zone. Slowly lower the jig as you pound it. Fish it through the zone, then slowly raise it as you continue pounding.

Try to get in tune with the transmission of each rapid vibration. Whenever you stop feeling the weight of the jig at the bottom of the up-and-down cycle, it could be a snag––or a fish. Set the hook instantly.

Carry less gear on the ice to stay light and fast, moving from spot to spot without the need to break down your camp each time. Think of it like power fishing on the ice. The faster and lighter you can move, the more water you can cover, and the more chances you’ll get to put your jig in front of a fish.

Keep only the essentials. You don’t want to carry multiple rods all day, so instead choose one or two that is versatile enough for numerous presentation. Pack a small tackle box of jigs in various colors, and wear comfortable shoes. A power auger will help you cut more holes through the ice, but they can get heavy. A lightweight pull-sled can help share the load when the ice conditions don’t allow you to drive a snowmobile out onto the ice.