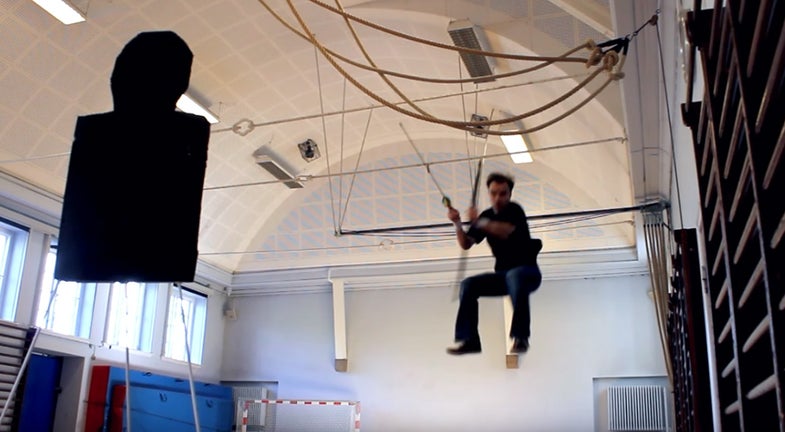 Lars Andersen is a Danish archer who seems to be on a one-man crusade to revive “ancient historical archery techniques” such as shooting arrows in rapid—10 arrows in 4.9 seconds, or 3 arrows in 0.6 seconds—succession. This, according to one of his videos on YouTube, is more than twice as fast as his closest competitor. This may be true. I had no idea that arrows shot per minute was a competitive event. But everything else is, so why not?

Andersen shoots on the run, while hanging upside-down from gym equipment, while bounding off walls, from the back of a motorcycle, etc. In other words, archery parkour. Which is almost certainly illegal in California, unless you’re stoned.

But you can’t dispute the fact that his video, Lars Andersen: A New Level of Archery, has more than 45 million views:

It’s not hard to rain on the guy’s parade. As we all know, this is one of the great pleasures afforded by the web. His history isn’t particularly scholarly. Is holding multiple arrows in your string hand really 5,000 years old? Maybe. But I’m pretty sure that ancient Assyrians didn’t write in English, so showing a book that says, “This is the best type of shooting and there is nothing beyond it in terms of power or accuracy,” is less than definitive. As is the book’s assertion that “The kings of Persia were wont to take children and teach it to them, rewarding those who mastered it and punishing those who did not.” Really? As CosmicVoyager, one commenter on the video puts it, “Cool tricks bro! Not historically accurate but still cool tricks!﻿”

But I don’t think we can dismiss the guy out of hand. The idea that “target archery,” where you stand still and shoot at a stationary target, is not how bows were used in actual combat seems logical. This matters, because stationary shooting leads to a number of habits, according to the video. Among them are shooting with one eye closed, placing the arrows on the left side of the bow, which takes longer than placing them on the right side, and using a back quiver, which is not a good way to carry arrows when you’re on the run. They catch on things and fall out if you lean over to avoid, for example, an arrow heading your way.

It’s also hard to argue with video footage of the guy grabbing an arrow in midair. Is there a way to fake this? Probably. You can fake anything. (Trust me on this.) But is it fake? I don’t know. As the man says, absence of proof is not proof of absence. (This, incidentally, is a great line to toss at pretty much anyone when you’ve done something wrong and are stalling for time.)

In his latest video (below), Andersen demonstrates shooting around targets to hit what’s behind them. A camera records him shooting arrows in succession, one curving left and the other right around a silhouette and squarely striking the target beyond. I don’t know whether both Arabic and English sources record this—as a commentator so breathlessly claims. But take a look. Is the guy full of bs? Let’s put it this way: He’s not shy about hyping his abilities. Is he completely full of bs? I doubt it.