7 Amazing 3D Shoots That Belong on Your Bucket List 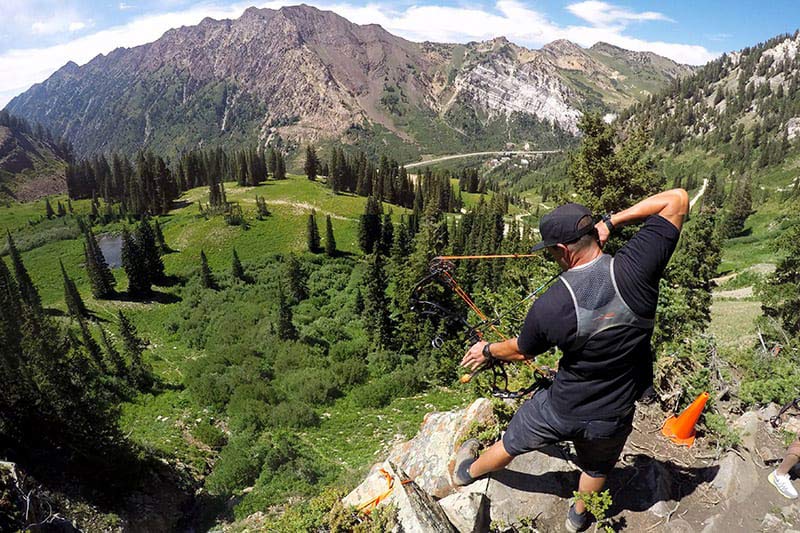 With weak knees and a trembling hand, you do your best to nock an arrow. Months of preparation have led to this one shot that separates you from achieving your dream. You pick a spot just behind the deer’s shoulder and send the arrow home with a thwack. But, this deer isn’t flesh and blood, it’s foam.

3D competition can provide heart-pounding adrenaline surges and realistic shots typically only found while bowhunting. That’s because 3D courses aren’t like your typical flat archery range that has targets set at exact distances in an open field. 3D archery takes the archery range into the woods, introduces unique angles, and creates new ways to have fun with a bow.

This discipline gets its name from the three-dimensional animal targets with scoring rings in the vital zone. The targets range from small skunks to enormous giraffes and are set along a course that resembles a hiking trail. These elements make 3D ideal practice for bowhunters or archers seeking a challenge.

3D courses, like golf courses, vary from local par nines to legendary courses like Augusta National. Here are some of the world’s most renowned 3D shoots that will challenge your skill and test your nerve.

The Best 3D Shoots for Competitors

The northern California countryside might be known for world-class vineyards, but serious archers also know it as the home of the iconic Western Classic Trail Shoot, often referred to as “Redding.”

The 3D course features 65 acres of beautiful scenery, long-distance shots, and 70 unique targets. One of these targets is Bigfoot, a 101-yard shot across a canyon at a huge Bigfoot target. For perspective, the target is so large it requires a ladder to remove the arrows. On the opposite end of the spectrum, the closest shot is 4 yards at a butterfly.

The 2019 Redding shoot nearly didn’t happen. In July of 2018 wildfires raced across California and headed toward Straight Arrow Bow Hunters, Redding’s host club. The fires were eventually extinguished but not before they damaged 50 of the 65-acres and destroyed 95% of the 3D targets. With the Redding shoot just months away, the local archery community pulled together to repair the course.

From September 2 to 7, 2019, 3D archers from around the world will compete at the World Archery 3D Championship in Lac La Biche, Canada. Countries send three of their top archers in the longbow, barebow, instinctive, and compound divisions.

Archery is primarily an individual sport, but the team competition at the 3D championship is one of the most exciting. The team is comprised of a compound, longbow, and either an instinctive or barebow archer. The top teams are ranked by their score and then shoot in head-to-head single-elimination matches. It’s like a march madness bracket, but much faster paced.

Barebow archer, John Demmer, is one of the members of the US Archery Team. Demmer has won a world team championship in field archery and looks forward to a chance at adding a 3D world title to his trophy case.

“To win it on the team side is pretty cool because it takes everyone, it’s a true team effort,” Demmer says. “To stand on the podium with your national anthem playing in the background, it’s tops.”

What happens when the best 3D archer in the world starts his own 3D shoot? Only good things.

When Levi Morgan started the Organization of Professional Archers, he set out to create a shoot that would challenge archers across all disciplines and provide excellent payouts.

“We are the only organization that pays back 100 percent of entry fees to the professional archers,” said Mike Pollard, who runs the shoot with Morgan. First place for the men’s expert class will earn you $30,000. It’s no wonder the shoot draws so much talent—not only domestically, but also the best shooters from around the world.

The payout is a big draw, but so is the format. This isn’t your typical 3D shoot. OPA adds a level of strategy to make the competition more interesting.

“What’s exciting about OPA is you can come back from a bad shot, it’s a risk and reward tournament,” Pollard says.

The scoring rings are worth 14, 12, 10, and 8 points. A shot that hits anywhere outside the 8 ring is worth 5 points. The key to the game is the location of these scoring rings. The 14 ring is located on the edge of the 8 ring, which means a shot that misses the 14 will score 8 or 5 points, a severe point drop. The 12 ring is on the inside edge of the 10 ring, and a slight miss will result in 8 or 10 points. To add a level of strategic complexity, the shots at the OPA range from 30 to 100 yards.

If the format sounds like something you’d like to try, you’re in luck. There’s an amateur division at the OPA shoot that’s open to anyone. The tournament is also spectator friendly, and there are plenty of family-friendly activities in the area.

If you’re interested in going abroad, there’s one shoot that’s worth the trip, the Swedish Open in Lilla Brattön, an island just north of Gothenburg Sweden. It’s a field archery tournament, which is like 3D, but with paper targets. At the Swedish Open, you’ll shoot on the cliffs that overlook the North Sea. But, don’t let the view steal your focus, you don’t want to send an arrow into the unforgiving rocks or icy water.

Martin Ottosson, the reigning barebow field archery world champion, is from Sweden and is a big fan of the Swedish Open.

“You take the ferry out to the small island and live in a cottage for three days, and all you have to think about is field archery,” Ottosson said. “Competitions are during the days and then in the evenings you can choose to either just chill in the restaurant, swim in the sea, go fishing, or as many do, take a relaxed archery practice.”

It sounds heavenly, but there are some serious shooting challenges to overcome including steep cliffs and tricky wind.

“The weather can sometimes be a challenge of its own,” Ottosson said. “Also, the terrain varies from quite easy around the rather flat center of the island to seriously challenging in the steep rocky sections near the ocean. The organizers normally create a great mix between spectacular ocean views and more comfortable forest targets.”

The bad news is, this shoot hasn’t occurred for the past few years, but it’s not gone forever. Hopefully, sometime soon, droves of archers will return to Lilla Brattön.

The Best 3D Shoots for Fun

The Total Archery Challenge hosts eight 3D shoots throughout the country. Each shoot has four main courses as well as a youth course and a practice range. These courses are designed to simulate bucket list adventure hunts. You’ll shoot across lakes, down cliffs, and through canyons at Dall sheep, moose, caribou, mountain goats, and more. The courses are like something out of Fred Bear’s field notes.

The MTN OPS and Prime western course have steeply-angled shots meant to mimic western hunting scenarios. The Sitka course ranges from 40 to 100 yards and replicates high country hunts for sheep, mule deer, and mountain goats. The locals course is an excellent warm-up course with much closer shots that range from 15 to 40 yards. There’s also a course for kids and beginners, with shots inside of 20 yards.

The shoot takes place in Pennsylvania’s Denton Hill State Park, where attendees can camp on site. In addition to shooting picturesque courses in the Pennsylvania mountains, it’s a unique opportunity to try bows from several custom bow makers like A&H, Blacktail, Big Jim, Java Man, Wengerd, CD Archery, and Black Widow, just to name a few. Trying before you buy is a huge advantage for traditional archers that might wait over a year for their custom bow.

Dewey Palmiari is attending his third ETAR this year and is a self-proclaimed bowaholic. “A traditional bow is a very personal choice,” he says. “It’s nice that you’re able to build personal relationships with the bowyers and can grab a bow, take it to the practice range, and just shoot it.”

The course and the vendors are fantastic at ETAR, but the real reason archers attend is the comradery. “You meet other people that also share your interest and passion,” Palmiari says. “That makes it easy to make conversation about equipment setup, shooting, and bowhunting.”

The Rinehart 100 (R100) features 100 targets of nonstop family fun. It’s known for having realistic and unique targets you won’t see on any other 3D course. These targets include a life-size hippopotamus, giraffe, and a tyrannosaurus rex.

It’s fair to say, James McGovern, the owner of Rinehart, knows a thing or two about 3D shoots. After all, his company manufactures 3D targets for individuals, clubs, and world championship events.

“What makes a great shoot are the people who are willing to put the time and effort into hosting it,” McGovern says. “It is very obvious when the club members truly care about the event.” That’s exactly what you’ll find at the Rinehart 100.

There are 16 R100 shoots throughout the country, which makes it easy to find one near you. While this is primarily a fun shoot, you can compete to be one of the top archers in your division. In addition to awards for the top archers, there are raffles, door prizes, and novelty shoots.

Take your archery practice outside the backyard and attend a 3D shoot this summer. It’s the best way to practice for bowhunting while having a blast and meeting new friends. Getting started is easy, you just need your bow, arrows, and a pair of binoculars.