Back in my caribou-hunting days in the northernmost parts of Quebec I got to see the guides carry some truly... 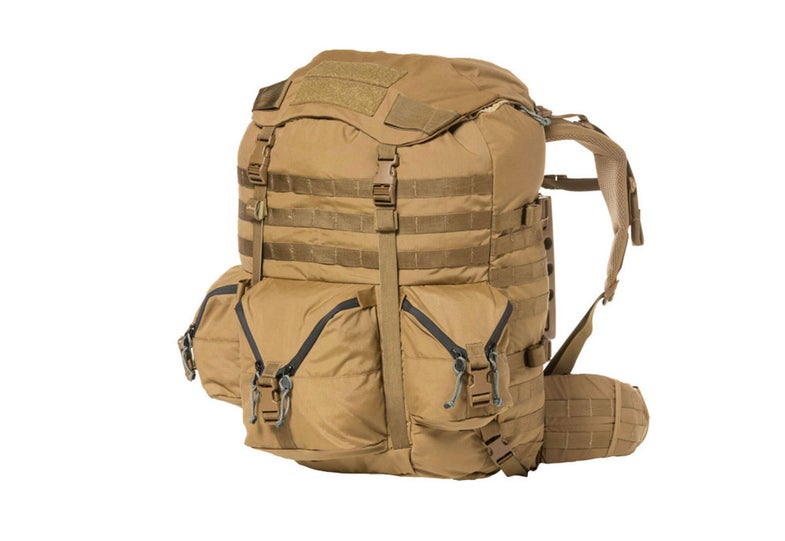 Back in my caribou-hunting days in the northernmost parts of Quebec I got to see the guides carry some truly backbreaking loads, and it formed my ideas on packs. The guides were mostly Montagnais Indians, who started carrying tumpline packs when they were around 10, and by the time they hit adulthood, they were able to caper nimbly o’er the tundra (which is a nightmare to walk on even without a pack) while carrying 140 pounds. That weight is not even the top end. A guide named Henri Boisvin, on a bet, walked away under a load of 320 pounds. Boisvin weighed about 160 pounds.

These prodigies were performed with a pack whose design probably goes back to prehistory. It’s a canvas sack with shoulder straps, sometimes a waist belt, and a broad canvas strap that goes over your head at the hairline, not across your forehead. Most of the time the guides don’t even bother with anything but the tumpline.

For 25 years or so I owned a canvas tumpline pack made by Duluth Tent and Awning, and came to believe in the tumpline pack formula: one massive central compartment with a couple of outside pockets. You could get anything in it, no matter how bulky or oddly shaped. Duluth still makes this pack. It’s the #4 Monarch 1156, and it costs $625, which is offset by the fact that you will never wear it out. If you get it soaked, let it dry and put a little Lexol on the straps, which are heavy leather.

However, the tumpline is for young backs. It has no frame, and just sort of hangs there. So I looked for something built to that same formula, but with a frame, that would make the burden less onerous.

Which brings us to the Mystery Ranch Mountain Ruck. It’s a close cousin to the military ALICE pack, except that it weighs considerably less and has a much better frame and suspension. The Mountain Ruck has one big compartment and three smaller pockets on the outside. The shoulder straps and waist belt are considerably heavier, stiffer, and wider than other rucksacks I’ve tried. That’s because Mystery Ranch engineers its packs to put their weight not on the hips, or the shoulders, or both, but to spread it evenly over your entire back. The first time you put one on it feels odd; then you realize that nothing is digging into you or pressing on you, which accounts for the strange absence of pain. Don’t worry; you’ll get used to it.

The MR frame, rather than being S-shaped, is flat, and it flexes (an S-shaped frame is going to fit someone’s back perfectly, but that back may not be yours). Using the waist belt as a reference point—a decent reference point should not fold or shift, and this one doesn’t—you can adjust the yoke to your height and your back shape. To see how this works, watch the video below. You’ll also get to see one of the great beards of this generation. MR assumes that each physique is unique, and that each load will be both awkward and changeable, and it designs accordingly.

I came to Mystery Ranch in 2005, via another military pack they make called the Crew Cab. This is a modest-sized modular pack that can easily fit in an overhead luggage compartment but expands to hold an alarming amount of equipment. As MR itself puts it, “The Crew Cab excels at carrying weird loads well.” I took it to Africa twice, and to New Zealand, and all sorts of other places in between. It made a believer out of me. As a fringe benefit, it looks complex enough that no airport security agency, here or abroad, has ever asked me to open it up. Ever. This may be on account of the pack itself, or it may be because I’m obviously Too Old for Jihad.

The volume of the Mountain Ruck is 4500 cubic inches. It weighs 8 pounds, and has a load range of 30 to 120 pounds. There are some other features that are not mentioned on the website, but which you’ll come to appreciate. The big bag has internal pockets and an internal compression strap which means that if you have a small load, you can pin it down so it won’t shift. If you have a big load, you can compress it down to the density of an iron meteorite.

The only zippers are located on the outside pockets. Normally, zippers on a backpack mean that you’ll lose something, but these zippers can only move if the snap fastener at the bottom of the pocket flap is released first.

The main bag is closed with a heavy flap and drawstring, and the top lid goes over that, so nothing is coming out the top unless you want it to. This may seem like an obvious consideration, but I’ve seen plenty of backpacks that made losing stuff so likely that it caused me to wonder what they hell their designers were thinking, or if they were thinking.

Finally, Mystery Ranch assumes that its military packs will be subjected to horrible misuse and maltreatment every day of their working lives, and they build accordingly. I’ve been using the Crew Cab now for 12 years, and it looks new, out of the box.

But the best testimonial for the Mountain Ruck was something I saw when I was in the Mystery Ranch store in Bozeman in 2011. There was an enormous young man there, a Marine, about to leave for his second tour of Afghanistan, who was buying a Mountain Ruck. Since 2004, Mystery Ranch has made packs for SEALS, and for SOCOM, but Marines were not included. He had to do this on his own dime.

This kid was about to lay out one third of his monthly paycheck for a Mountain Ruck, which says more than I ever could. I’ve often wondered what happened to him. I hope he came out OK. I’m sure the pack worked fine. Mysteryranch.com.