Who Could Axe for Anything More?

The new Allagash Cruiser, made to order in southern Maine, is as fine an axe as you’ll find 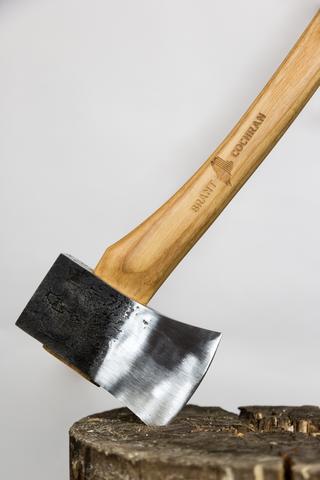 In last year’s post of December 27th, I advised you that axe-making had come back to Maine in the form of Brant & Cochran, a small firm located in South Portland. During the 19th century, Maine was a center of the logging industry, and along with this, home to more than 300 axe-making companies. But the logging gave out, and with it the axes, the last factory vanishing in the 1960s.

Brant & Cochran was formed in 2016 by Steve Ferguson, a school psychologist; his brother Mark, a Portland attorney and software-company owner; and Barry Worthing, a nurse at Maine Medical Center.* At first glance, none of this would seem to qualify anyone to make axes, but the three are good with their hands, and willing to do the work involved, and plain dippy on the subject of axes. Before they got started, they spent many hours doing research at the Patten Lumberman’s Museum, in the town of that name, and they acquired 20 or so fine old axe heads to refurbish. (These have long since sold out, but B&C is still refurbishing axe heads if they’re good enough to merit the effort and you can see the results on their website. However, most of their rehab jobs are axes that people discover, or have passed on to them.)

But their object was to come up with their own design, which was not as simple as it might seem. At the peak of all the hewing and hacking, there were more than 400 axe head patterns in the United States. In the 1920s, the number was standardized at 40. Here are some of the names. Some patterns have two names; these are divided by a slash: Yankee, Kentucky, Michigan, Maine, Rockaway, Baltimore Kentucky, Delaware/Wide Bit Dayton, Crown/Michigan, Regular Wisconsin, Swamping, Cedar, New England, Wisconsin, Western/Pennsylvania, Hoosier/Zeek, Humbolt, Jersey/Baltimore Jersey, Connecticut, Reversible/Half Peeling, and Long Island.

The pattern that B&C settled on was the Maine, which is a rectangular single-bit pattern with hardly any beard. It forms the basis for their Allagash Cruiser**, which is on the small and light side. The head, which is forged from 1050 steel, is 2.25 pounds, and the ash handle is 28 inches long.

The head is differentially tempered. The edge is Rc 56-58, which is about like a Randall knife blade. The eye is softer, and the poll is hardened roughly between the two so you can pound on tent stakes, or on the person sharing the tent with you whom you really do not like. The poll, the edges of the head, and the bit, are polished bright, while the upper part of the head is unpolished and carries the forging marks. Each head is stamped with its year of manufacture and the forger’s initials.

Back in December, I was told that the Allagash Cruiser would be “primitive looking.” This has not turned out to be the case. It’s a lovely-looking thing, as a fine fly rod is lovely, or a high-grade side-by-side shotgun, or an old rawhide-laced snowshoe. The wedge that holds the handle in place is made from dark walnut, not a hunk of steel. The ash handle actually has some figure in it, and is finished with B&C’s proprietary mixture of wax and oil. The handle has a red-and-white thong for hanging, which is a B&C trademark.

It is sharp. The B&C motto is, “Wicked Sharp. Not Kidding.” If you run your finger down this edge, you’ll be bleeding profusely before you’re done. I have one other axe which is about as sharp, and that is a Hultafors whose edge I worked on. I haven’t touched the Allagash Cruiser. If you’ve never handled a really sharp axe, you’re in for a revelation.

The price for the Allagash Cruiser is $250, which includes a nice leather sheath, and it takes 4 to 6 weeks for delivery. There’s no shortage of perfectly usable axes that you can buy on the spot for a lot less money but this is something of a different order.

* They have since been joined by blacksmiths/machinists Gabriel McNeill and Nicholas Downing.

** The Allagash is the Maine river that rises in Churchill Lake and flows 65 miles north into Canada, eh? I had the privilege of paddling its entire length in 1958. A timber cruiser was a highly skilled individual who would be sent into the wilderness to determine how much usable timber was on a chunk of land and which trees could be cut. They carried a light axe with them to cut a blaze in the trees to be felled. Thus, cruiser axes.