From refrigerators and stoves to covered boat docks, these blinds have it all 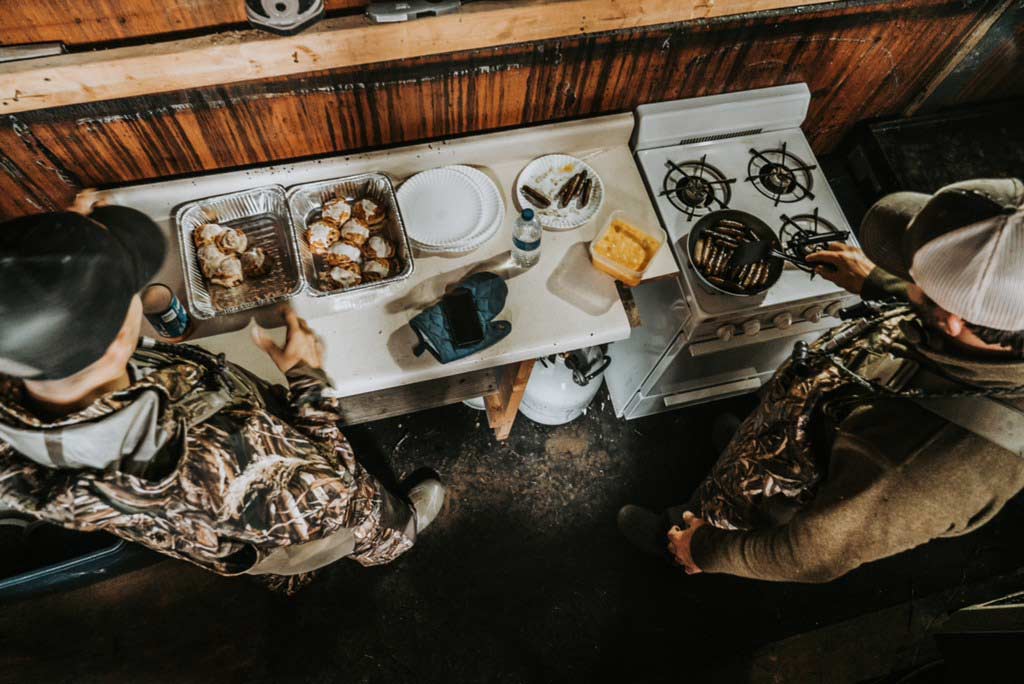 Once, my duck hunting buddy had a great idea. He picked up four dock flotation drums from the Harbormaster and repurposed them with a custom-built deck and frame. On dry land, it was as sturdy as a hunting cabin, but during our first hunt on the water, we found out how unsteady it was. The idea was great, but the execution needed more work. We reappeared the following season with a wider blind that didn’t tip. It became known as the Duck Barge.

If you’re tired of hunkering down in muddy mosquito ditches, getting wet in downpours, or being chilled by a strong headwind, then building a world-class duck blind might be your next project. But, before tinkering away to find what works best, check out the following blinds. They’ve got features you might want to incorporate.

Brad Arington hunts in over 50 different duck blinds per year, and it’s all because of his dogs. “I see so many different blinds from California to the Eastern Shore of Maryland, and most points in between,” he says. “Most all of the invitations come from folks who bought a dog from me or had me train one of theirs. Heck, I even met my father-in-law through my Lab, Bo.”

Arrington finds that the best blinds show how a waterfowler responds to his unique hunting conditions. “My friend Brandon Martin of Daybreak Outdoors has a cool blind in Southeast Missouri,” he says. “It’s a stick-built blind in the middle of a pond. The blind is a 20×30-foot platform of 600 square feet. It’s framed and decked with marine plywood and can hold up to eight hunters. The exterior is grassed with local vegetation so that it naturally blends right in. Kerosene heaters take off the morning chill while gangplanks help dogs on their retrieves.

“Here’s where it gets cool,” Arington says. “All duck hunters like to eat, but there are some that like to cook, too. Brandon has a four-burner propane stove that he uses for cooking eggs and sausage and even baking muffins. The prep-table next to the stove makes it easy to whip up a tasty lunch of duck breast sandwiches as well as an entire mallard meal. And I can tell you this; a freshly-baked chocolate chip cookie eaten in a duck blind will blow your mind.

“Waterfowlers are solutions-oriented. We’ve all sat on spackle buckets in the mud or bench seats in a framed blind. But if you’re low to the ground, then getting up to shoot or grab gear can be challenging. Brandon solved those issues by using playground swings for seats. The webbing is comfortable, and the chains can be adjusted to match a hunter’s height. When the ducks are dumping in, shooting is a breeze, but the real benefit comes from increased movement. Those swings make it easy to follow circling ducks, from the front of the blind to behind it, and they make it easy to grab shells or other gear. Better shooting comes from proper positioning, and those swings are tough to beat.”

Arington helps train many of the dogs for the Honey Brake Lodge in Louisiana, and he’s a fan of a blind there that resembles the Bat Cave. “They have a 16-foot skiff to transport hunters, gear, and dogs to a stick-built blind that can hold up to 10 hunters,” he says. “The hunters step directly out of the boat and into the blind. It’s so well designed that ducks never even see the boat which remains in the blind during the hunt. Everything and everyone is totally concealed. With that kind of easy access, folks literally could wear slacks and loafers if they wanted to.

“I’m not sure of the actual dimensions, but it’s about the size of a small apartment. If I had to guess, I’d say it’s about 1200 square feet of blind that sits right in the middle of a lake. There is a generator to power lights that make for easy pre-dawn setups. It even has running water. If they added bunks, then a group could live in that blind and hunt for a week. It’s really cool.”

Read Next: This Ingenious Decoy Rig Will Change Your Duck Hunting

For Arington’s personal setup, he built a blind on a stripped-down pontoon boat. “The concept for the pontoon was to create a blind that was stable enough to handle five hunters and a dog,” he says. “I removed all of the decking from a 16-foot pontoon boat and left only the floats and the platform. From there, I built a blind out of marine plywood. There are five shooting butts along with a kennel for the dog. I painted the exterior flat black to reduce any glare, and when I pick a spot to hunt, I’ll grass it with vegetation that matches the area. The pontoon goes to ponds and lakes based on where the ducks are. For extra stability, I usually set it so that one pontoon is against the bank. If it’s really cold, I’ll pack some kerosene heaters for warmth. We’ve killed one heck of a lot of ducks out of it.”

Is a bigger blind better? Not necessarily, says Hank Garvey from Newburyport, Massachusetts. To hunt the guzzles, estuaries, salt pannes, and tidal rivers, he needed a low-profile, lightweight, seaworthy blind. And because the 12-foot tides push ducks all around, his blind had to be mobile. The solution was a hand-made Barnegat Bay Sneak Box, which can be rowed, paddled, or motored to where the ducks are that day.

“I built mine to be representative of the original boats,” he says. “I built five in total, four with my hunting buddies and one with my son Hank when he was old enough to learn to use the tools. Each sneak box is 12 feet long with a 4-foot beam. In keeping with the original design, I used cedar planks and mahogany ribs. The rocker and traditional feather-edge provide a smooth and stable ride in stiff seas. There is one coat of fiberglass and multiple coats of epoxy, so they’re watertight. I went with a canvas dodger because when it gets wet, the saltwater shrinks the fabric and keeps it tight. I’ll add in some spartina grass along with natural salt cordgrass, and the boxes blend right in. You wouldn’t think they were warm, but when my Lab and I are tucked in under the dodger, it’s warm enough to take a nap. Each boat weighs 135 pounds, making them light enough to drag up into a salt panne. Gunkholing in skinny water is easy, and while a 9.9 horsepower outboard pushes them along fine, I prefer a 15 horsepower. Two-stroke outboards are better because they’re lighter than four strokes. That weight makes a difference on a lightweight boat.”

A family farm in Missouri served as the perfect location for Ira McCauley to build his blinds. McCauley and his brother Aaron own a veterinary practice where they focus on sporting dogs. Waterfowlers also know him for his waterfowl supply company, Momarsh and his work as a Eukanuba Sporting Dog pro-staffer.

Read Next: 5 Tips for DIY Duck Hunting in the Prairie Pothole Region

“Heaven is a blind we built on our farm,” he says. “It’s pretty special to us. It’s in a super good location with lots of ducks trading from roosting zones in the refuge to the agricultural area of Habitat Flats. Heaven is on a one-acre pond that is surrounded by woods. No matter the temperature, regardless of the wind direction, the ducks pitch in.

“The blind is a seven-holer. It’s 20 feet long and 8 feet wide for a total of 160 square feet. It’s stick-built on land, and it is framed and covered with marine plywood. There are also two Momarsh dog blinds to conceal the Labs. We ran electricity to the blind, so there is always a fresh pot of coffee. To make breakfast or lunch, we have a small refrigerator and a stove with an oven and four burners. Radiant heaters with fans circulate enough warm air to keep everyone warm on the coldest of days. During Christmas, we string colored lights all around the blind. They’re festive and get us in the Christmas spirit, and they also make it easier to see when we’re setting the dekes.

“The lights are cool but the real kicker is the art on the blind’s ceiling. My dad Dan and my brother Aaron painted a mallard drake with cupped wings coming through the clouds on a final approach. They both paint as a hobby, and I’ve got to hand it to them, they did a phenomenal job. They made our blind the Sistine Chapel for waterfowlers.

“A second addition to our property is our recently added Sumner Sauna,” he says. “It’s a pit blind that is sunk into a berm between two ponds, about a half-mile away from Heaven. We named it the Sumner Sauna because when we kick on the heaters, we’re as warm as we can be. The frame is made from heavy-gauge steel and painted with epoxy to slow down the rusting process. In the hole at one end of the blind is a Momarsh dog box. At the other end is a kitchen. This kitchen isn’t as big as the one in Heaven; in fact, it’s a pretty simple deal with a small fridge and a two-burner stove. The most unique part of the blind is that we have a well discharge that pumps water to fill up the ponds on both sides of the blind. Before we hunt, we’ll pick a side based on the wind. All we do next is to turn a spigot, and water from a well about 600 feet away starts running to the selected side. There is never a low water situation, and our setups have never been easier.

Read Next: So You Want to Shoot More Banded Waterfowl

“I might add that the Sumner Sauna is still a work in progress. For this year, we’ll add some finished-grade loam and mulch to the mound, and next year we’re planning to plant fescue for better concealment. We’ve got a few weather-related bugs to iron out. Our area of Missouri has had heavy rains all year long, and the Sumner Sauna has flooded. That’s no big deal though, we’ll just pump it out. Come opening day we’ll be ready to roll.”