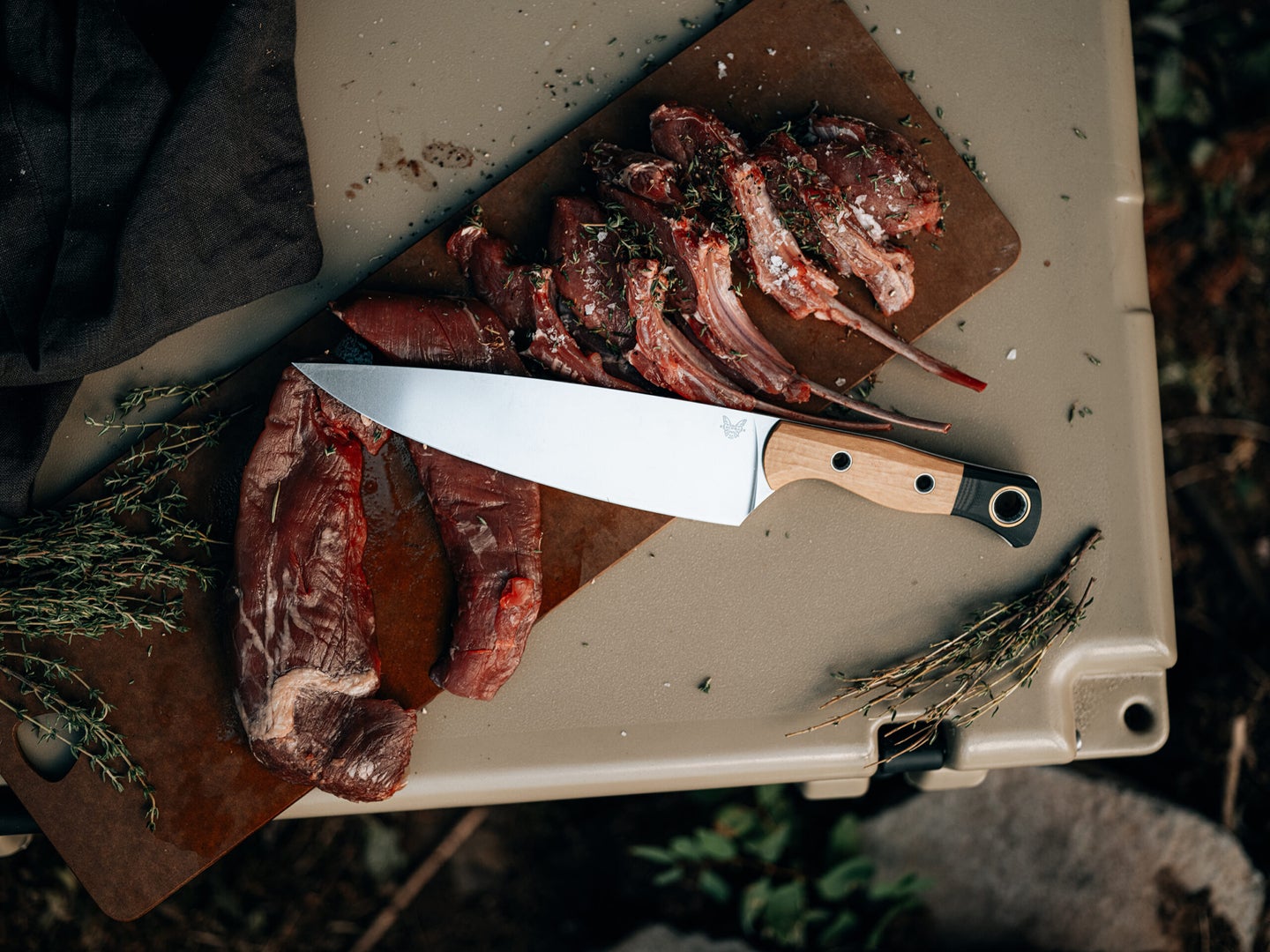 Of all the tests of a knife’s sharpness—and I’ve employed methods from cutting a paper towel to shaving hair from my forearm to slicing thin wafers of newsprint—I’ve never found a better way than the task I faced the other night: Removing dried, tacky silverskin from a venison backstrap. A knife needs to be sharp enough to do this without shearing good meat from the cut, and without getting sticky and hanging up as you slide the blade between the muscle and the silverskin. The knife I had in hand was a Benchmade 4030 Utility Knife, one of the shining (literally) stars in the brand-new line of culinary knives from the venerable Oregon cutler. I can’t recall another knife that pushed through the fascia and connective tissue and silverskin with such directed, near-frictionless ease.

Benchmade is a lauded maker of hunting, tactical, and EDC knives, and has tested the waters of the culinary market of late. The Meatcrafter was among its first, which was soon followed by the four-knife 4001 Table Knife set—the blades of which are sturdy enough for medium-duty field prep but equally handy, and handsome, beside a dinner plate. With the introduction of its 3-Piece Knife Set and a companion Station Knife, Benchmade takes the full wild-foods plunge. It’s an impressive lineup.

These aren’t inexpensive knives, and they’d be overkill if you’re more of a Hot Pockets and cream-of-mushroom-soup kind of cook. To blunt the pain, Benchmade offers these knives in more affordable steel and handle materials (more on that in a minute). But for those of us for whom the culinary aspects of hunting and fishing rank up there with sunrises, the three blades in CPM154 steel are a one-stop way to elevate your kitchen depot with a brand that carries serious hunting and fishing street cred.

The bedrock for the series is the 4020 Chef Knife. The 8-inch blade has the familiar chef knife profile, which excels at chopping, slicing, and dicing tasks. At 7.37 ounces, it’s surprisingly light for its length, and a finely tuned weight balance keeps it lively in the hand. That’s especially evident when the knife is held properly with a grip choked up on the handle: The forefinger and thumb squeeze together at the blade bolster, while the other three fingers grip the handle behind the bolster. The bolster on the Benchmade Chef Knife is subtle, but the sweeping curve from the tang to the sharp edge makes for a great grip with the palm of your hand, for super control with the quick, rolling cuts of a chef knife.

The 4030 Utility Knife is a slightly scaled down version of the Chef Knife, with a 6.16-inch-long blade. This is the knife I used to trim away the tough silverskin on the backstrap, and it’s been the one knife that I’ve reached for the most often. It’s a heck of a chopper and dicer, and while it’s not as flexible as a fillet knife, it still rendered clean cuts while filleting Spanish mackerel.

The little kid on the block is the 4040 Paring Knife. With a 4.3-inch blade, it’s a bit of a handful for a paring knife, but that extra length gives it some serious oomph. The fine tip helped me disassemble a few dozen doves in short order, and I’m thinking this knife will see double duty in both my kitchen and in my basement butcher shop. I’m not sure it will be my go-to apple peeler—it’s just a shade too large for that—but given how many great, inexpensive paring knives are available, that’s not much of a knock.

Customize Your Own Set of Benchmade Knives

One intriguing approach to the Benchmade culinary knife set is the option for consumer customization. The knives are available in two steels, either 440C or CPM154, each of which can be ordered in a stonewashed finish or with a Diamond-Like Carbon, or DLC, coating to reduce friction. My test set came in CPM 154, a pelletized steel that is corrosion-resistant, hard, and tough. Given how long these knives will last, the upgrade is definitely worth the money.

Read Next: How to Pick the Best Knife Steel

All the knives sport a full flat grind, with a final edge bevel honed through Benchmade’s proprietary SelectEdge process. The company is super-secretive about what its SelectEdge entails. The knives are ground to a 14-degree angle on each side, for a finer edge than is found on many kitchen knives. According to Martin Mills of Benchmade’s Technology Center, SelectEdge is as much a manufacturing process as an edge bevel. It incorporates a smoother grinding process that generates less heat, and a second buffering approach with specialized compounds to smooth out the microscopic serrations in the steel alloys. Seems to me you’d get the most benefit from the harder CPM 154 steel that helps the knife hold its edge longer, but all of these knives are included in Benchmade’s lifetime factory sharpening offer. Send the knives back to the factory and they will be cleaned, sharpened, and returned for free. Forever.

And the customization options go beyond steel. The knives are available in a wide range of handle materials: seven colors of G10, three colors of Richlite, and carbon fiber. Mine sport a sexy jade handle with a contrasting black butt cap. Edges on the handle scales are beveled so you can cook for the entire camp without tiring your hands, and built with a gentle palm swell for a sure grip. Each knife is constructed with what Benchmade calls “pivot rings” (these are essentially a large lanyard ring and a pair of through-holes in the handle and tang) in four materials, including 24k gold-plated stainless steel, and a blue sapphire PVD coating.

If I weren’t an English major, I could calculate the number of custom iterations possible with all the materials options, but let’s just say there’s a lot of them. But what’s more impressive than the ability to match the knives to your countertops is how quickly these three kitchen tools have pushed a number of my very fine kitchen knives to the back of the cabinet. And that was no small feat.