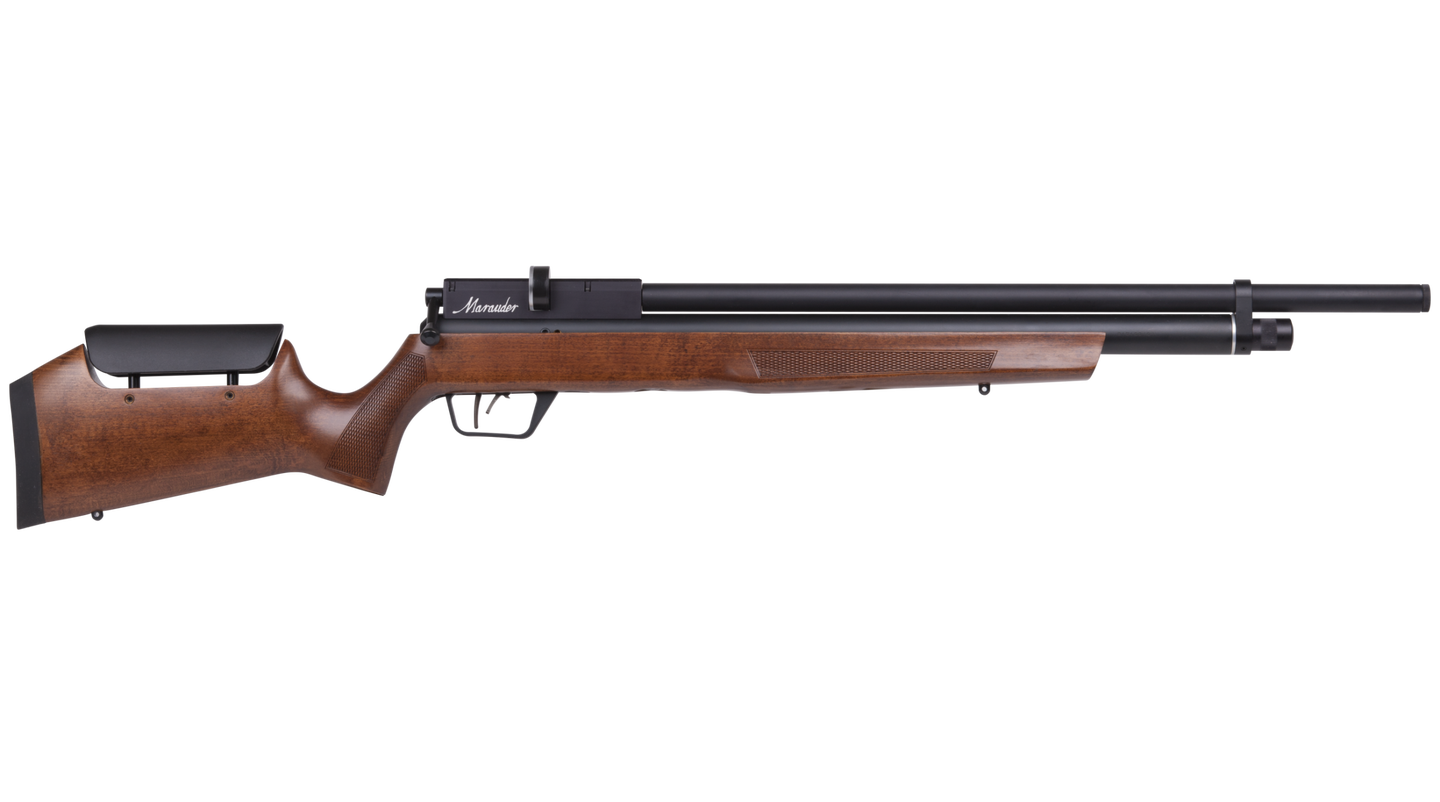 The Benjamin Marauder PCP air rifle is an excellent choice for both new and experienced air gunners looking to make the jump into the world of pre-charged pneumatic air rifles. This competent air rifle can fill a variety of roles, offering performance that far exceeds its price point.

What Kind of Air Rifle is the Benjamin Marauder?

The Benjamin Marauder is a pre-charged pneumatic (PCP) air rifle that is well-suited to hunting, plinking, and pest control. This high-powered air rifle is available in .177, .22, and .25 calibers, which is the subject of this review. The larger-diameter pellet loses some velocity as compared to its smaller counterparts, but the additional mass adds to the gun’s knock down potential and makes it a better tool for air-rifle hunting. The gun features a rotary magazine that combines with the bolt action to keep it stoked for 10 rapid shots in the smaller calibers, or eight in our tested model. The pellet rifle lacks any sights but comes equipped with a dovetail mounting rail for the addition of a scope.

The Marauder serves as an excellent introduction to serious PCP air rifles, with the potential to grow with the shooter. With a real-world price of under $500, it’s priced right alongside many introductory models.

How the Benjamin Marauder Works

Like all PCP air guns, the Benjamin Marauder must be filled by an external air source. You can use a high-pressure tank or pump, which attaches easily via the quick-disconnect Foster fitting. You can use a hand pump, but filling the Marauder’s reservoir to the required 3,000 psi will grow old quickly. Consider a larger, external tank capable of handling around 4,500 psi or an electric compressor designed for PCPs standard equipment for high volume shooting. The stock features a built-in manometer, or pressure gauge, tucked into the foreend so you’ll be able to tell at a glance how many shots you have left before you need a refill.

The Benjamin Marauder is fed by a multi-shot rotary magazine, which holds 8 pellets in .25 caliber or 10 in the smaller bores. Loading the magazine may seem unfamiliar to those that typically shoot firearms, but the design is fairly standard among airguns. Start by spinning the cover around a full rotation and then drop a pellet in. Once the first is inserted, spring pressure takes over and locks the cylinder into place, allowing you to fill the other slots with ease. With a little practice, the process becomes second nature. The magazine slides into the right side of the receiver, and each round is chambered via the Marauder’s bolt action. The bolt itself can be configured for right- or left-handed shooters.

How We Tested the Benjamin Marauder

I had the good fortune of using the Benjamin Marauder for bird removals while working in the USDA’s Wildlife Services division over the course of several years. The operation was simple: Open the giant doors on a trash transfer station, let the local nuisance bird population filter in for a half hour or so, then close the doors and go to work. Each session involved taking anywhere from 75 to 150 pigeons, starlings, and gulls with the Marauder. Because they were such high-volume shoots, a full-size SCBA tank was used to keep the Benjamin air rifle filled throughout the course of a day. Several spare magazines were kept on hand for rapid reloads, and shots were taken using a Primos Triggerstick monopod to avoid taking a knee on the garbage-covered floor.

Of course, it would be irresponsible to take game using any gun, air or otherwise, without familiarizing yourself with it and its capabilities. Before it was taken into the field, I put the Benjamin Marauder .25 through its paces on paper at the range. Like anything that shoots, pellet rifles can exhibit a preference for a particular projectile. But this Marauder didn’t seem too picky, as pellet selection was driven mostly by availability. To feed a variety of air guns with as few issues as possible, and provide suitable penetration, our department went with domed pellets from RWS. These were usually of the Superdome variety, and weighed right around 31 grains if memory serves, but we substituted others if availability became an issue.

How the Benjamin Marauder Performed

The Benjamin Marauder printed some impressive groups on paper, but where it really shined was on long shots on pigeons and gulls. Those transfer stations were often larger than football fields, providing plenty of opportunities to stretch the barrel. Anchoring gulls at 50 yards was commonplace; even 75-yard pokes wouldn’t garner any praise around the watercooler. I don’t believe I ever took a shot at 100 yards with the Benjamin, but with enough hold-over I believe it would be possible. But note that there was no wind with the doors closed, which eliminated a lot of possible interference on the pellet’s flight.

At the range, the Benjamin Marauder provided one-inch, 10-shot groups at 50 yards with just about everything we ran through it. The department usually purchased pellets in bulk to support a variety of removal operations, so they typically opted for whatever domed pellets they could purchase locally in multiples of 1,000. Because they were used on animals, they bought the heaviest they could in each caliber, trading speed for energy.

You’ll often see the velocity touted in airgun advertisements, but that’s only part of the picture. To ethically take game you need to ensure the airgun you’re using delivers enough energy, which is a product of the mass of the projectile and the speed at which it is moving. Benjamin advertises 50 foot-pounds of energy at the muzzle, which is pretty spot on with 25-grain pellets and a full tank. Assuming the heavier-than-average 31-grain Superdome pellets slowed the velocity down to around 750 feet per second, the Benjamin Marauder is probably delivering about 38 foot-pounds. This is enough to humanely take raccoon-sized animals with appropriate projectiles and a well-placed shot.

Because airguns don’t rely on combustion to push a projectile they tend to be quieter than powder-burning arms. But the air that propels the pellet is moving at a good clip, and there’s quite a lot of it exiting through a tiny space. Benjamin manages to limit the sound created by this action using a shroud that surrounds the barrel and siphons off the escaping gas slowly. This brings the report way down, and makes for truly quiet air rifle. The newer version of the gun also features a “de-pinger,” which is a device that soaks up some of the vibrations that occur when the hammer hits the valve stem and the resulting ping. This also brings down the decibel levels slightly. The arrangement makes it one of the quietest pre-charged pneumatics on the market.

The trigger is another high point on the Benjamin Marauder, breaking right around three pounds. It’s a two-stage match-grade design, and can be easily adjusted using simple hand tools. A quick range session is all you need to get it adjusted right where you like it. Set it and forget it.

At 8.2 pounds, the Benjamin Marauder can’t be considered lightweight. You can add another couple pounds for a scope and rings. Still, that’s right in line with many of the centerfire bolt action rifles on the market so you probably won’t notice a big difference switching between the two. The Marauder doesn’t quite feel like your deer rifle though; it’s more akin a to a .22 geared for competition. I found the heft to be an asset, helping to keep the rifle steady when taking offhand shots and firmly planted when shooting from a rest.

The Benjamin Marauder is available fitted with ambidextrous wood or synthetic stocks, both of which have adjustable combs to provide a solid cheek weld for a variety of users. The wide foreend is perfect for riding bags, but isn’t so wide that off-hand shots are a chore. The safety is tucked inside the trigger guard, which might take a little getting used to but flicks off in an instant when shot opportunities present themselves. The magazines insert readily, and the process becomes second nature after a few reloads. Sling swivels let you put the gun’s weight on your shoulders, making carrying the rifle long distances in the field easy.

The process for filling the Marauder is just about as easy as it gets for a pre-charged pneumatic air rifle. Attach the Marauder to a tank, pump, or compressor using the quick-connect Foster fitting. Fill the Marauder’s reservoir to 3,000 psi, bleed the line, disconnect it, and go shoot. The manometer in the foreend takes all the guesswork out of the onboard pressure, and eliminates the need for any external gauges. The cap over the fill valve is a nice touch, preventing it from getting damaged if the gun ever takes a fall.

What the Benjamin Marauder Does Best

The Marauder might just be the middle infielder of the pre-charged pneumatic world, capable of handling a variety of tasks well. The configuration of the stock and the excellent trigger make it a good choice for those that want to see just how well they can shoot, whether that be in the backyard or at a competition. The power of the .25 makes it perfect for small game hunting and pest control. And if you’re just looking for a little fun, the Marauder can mow down cans and reactive targets with the best of them. And the shrouded barrel makes sure you won’t aggravate the neighbors in the process.

What the Benjamin Marauder Does Worst

Unlike a number of the more modern designs, the Benjamin Marauder is not equipped with regulator. Put simply, a regulator keeps the pressure inside the plenum, or air chamber responsible for launching the pellet, consistent. Lacking this device, each shot from the Marauder loses a little oomph as the tank is depleted. The loss in pressure translates into a loss of velocity, and shots start to drop faster. This does effect accuracy, but it doesn’t occur right away: In factory trim, you can expect about 16 shots before the .25 caliber Marauder starts to lose power. That figure doubles for the .177 and .22 caliber versions.

Does the Benjamin Marauder Deliver on its Mission?

The Benjamin Marauder is the perfect vehicle for anyone looking to get started in pre-charged pneumatic airguns. Despite a relatively low price point, it offers many high-end features that were previously only available on the finest European imports—in a made in the USA package. Plus, the platform offers plenty of room for growth.

Existing relatively unchanged since its introduction in 2009, there’s plenty of aftermarket support for those that want to tune their Marauder. In fact, so many people have taken to tweaking the PCP that it has become known as the M-Rod. If you decide you want to tinker you can readily find aftermarket triggers, de-pingers, de-bouncers, and a host of other performance goodies ready to hot rod your own. There are even regulators available that eliminate my only complaint against the M-Rod.