10 Great 6.5mm Hunting Cartridges That Are Not the Creedmoor

If you love the idea of .26-inch bullet diameter but hate the 6.5 Creedmoor, here are 10 cartridges of the same, well, caliber 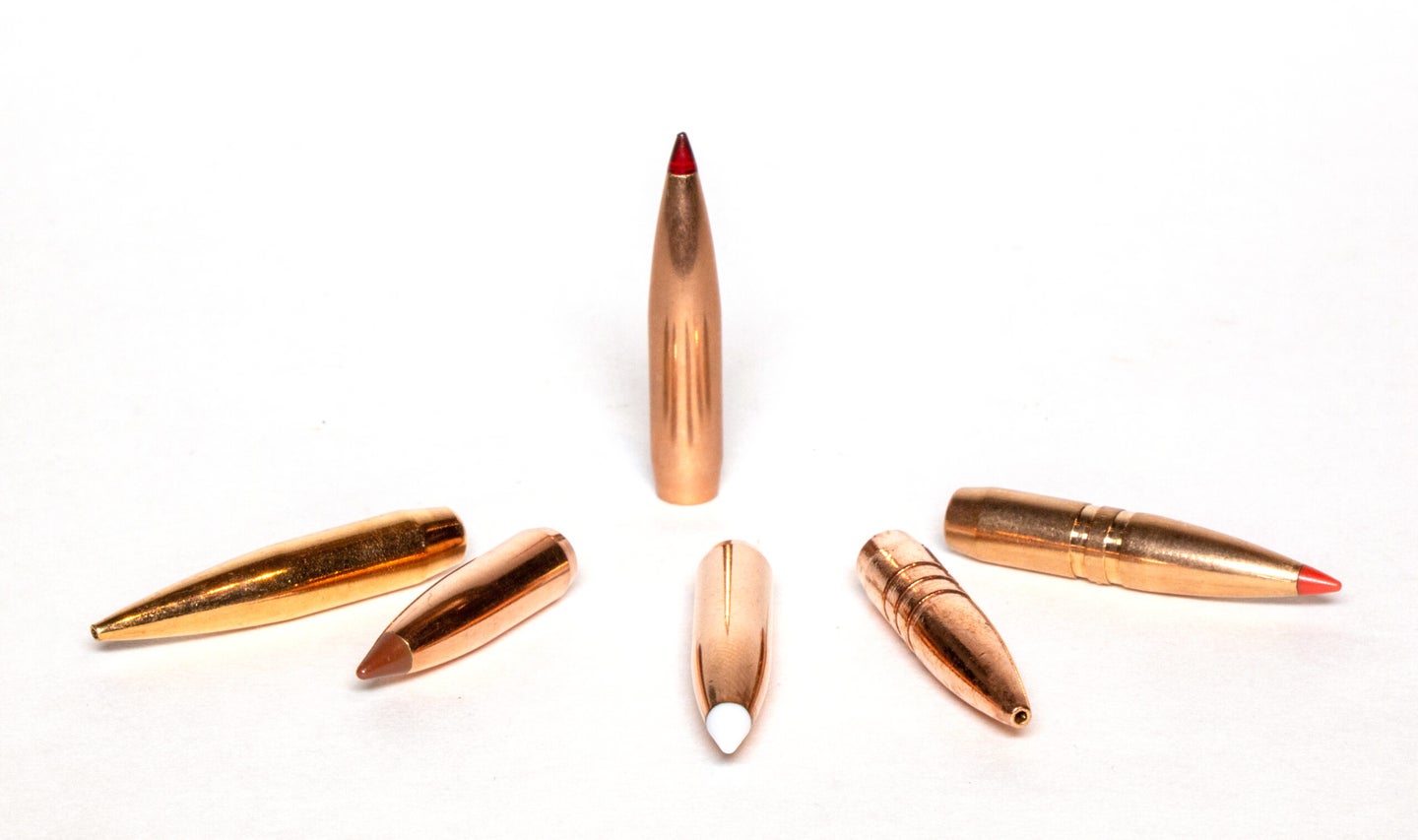 The Creedmoor is not the only cartridge capable of launching these streamlined, high-BC bullets. Richard Mann
SHARE

Before the Creedmoor came along, American hunters had no interest in 6.5mm cartridges. Worse than that, they seemed to disdain them. Maybe one reason is because a six-five was used by one of our history’s most notorious assassins: Lee Harvey Oswald. His rifle was chambered for the now-obscure Italian 6.5x52mm Carcano. No one in America seemed to care about a 6.5mm rifle cartridge until 2014, which was the year the movie American Sniper was released and was seven years after the 6.5 Creedmoor had been introduced. Almost overnight, everyone wanted to become a master practitioner of long-range shooting, which led to the immense popularity of the Creed.

But as with anything that achieves immense popularity, the 6.5 Creedmoor has garnered almost as many haters as fanboys. For them, especially, and for anyone else who likes a medium-bore hunting rifle, it’s important to remember that the Creedmoor is far from the only six-five (or .26 caliber). Here are 10 others, some older, some newer, some slower, and some faster. All proven big-game getters.

Believe it or not, the 6.5×55 was introduced more than 100 years before the 6.5 Creedmoor. When you hear certain riflemen bashing the Creed, this is one reason why. Their argument, in a nutshell, is that the Creed, more or less, has been around forever; so what’s the big deal? The 6.5×55 is very popular in Scandinavian countries for target shooting and hunting. And not for hunting just anything; it is considered a fine cartridge for moose. A few savvy American riflemen have appreciated what the “Swede”—as it’s often called—has to offer. That said, the 6.5×55 has never (mostly likely because of the popularity of the .270 Winchester over here), and will never, achieve mass acceptance in the States. Most ammunition manufacturers offer 140-grain loads for the Swede, with muzzle velocities between 2500 and 2700 fps.

America’s first 6.5mm rifle cartridge, the .264 Winchester Magnum had a SAAMI specified maximum average pressure of 64,000 psi. Which is to say, it was a legitimate magnum and would push a 140-grain bullet to about 3100 fps. Initially offered in the Winchester Model 70 Westerner rifle, it was intended for shooting game animals at longer ranges. It was well received but earned a reputation as a barrel burner. The .264 was essentially pushed aside by the 7mm Remington Magnum, and today it is mostly forgotten. Still, as a long-range deer and antelope cartridge, it remains one of the best. Nosler offers an excellent load for the .264 featuring a 130-grain AccuBond bullet at 3100 fps.

Back before anyone ever thought of anything called a “short magnum,” Remington introduced two of them. The .350 and the 6.5 Remington Magnums were sister cartridges, with magnum power, that would fit in a true short-action rifle. Initially chambered in the lightweight, 18-inch barreled, Remington Model 600, the 6.5 Remington Magnum was sort of doomed from the beginning. That short barrel did not allow the cartridge to perform to its potential, which would not be fully appreciated for another 53 years. Out of a 24-inch barrel, this cartridge will easily push a 140-grain bullet to 3000 fps, and you can reach 3600 fps with 100-grain bullets. But no one really bothered to find out until after the Creed showed up and interest in six-fives skyrocketed.

Some believe Remington stole this cartridge. In 1996 A-Square submitted all the necessary materials to SAAMI regarding a .308 Winchester cartridge necked down to 6.5mm, asking that it be approved and named the 6.5/08 A-Square. A few months later, Remington did more-or-less the same thing, and now we have the .260 Remington. This cartridge will launch a 140-grain bullet at 2750 fps or a bit more, and it will work in short-action rifles. Ironically, the .260 Remington seemed to remain mostly undiscovered by hunters until the 6.5 Creed gained so much traction and hate. It’s a lighter-recoiling and flatter-shooting option to the .308 Winchester, and it’s suitable for most all non-dangerous game.

Originally a wildcat known as the 6.5-284, this cartridge was standardized by Norma in Europe more than 20 years ago. However, it wasn’t until 2020 that it was submitted by Nosler and became SAAMI-approved in the States. Nosler likely did this because of the current interest in 6.5mm cartridges, and it’s a good thing. Once a favorite of benchrest shooters, the 6.5-284 is a fantastic cartridge. It will run a 140-grain bullet at about 2800 fps. The oddity of the cartridge is that it has a rebated rim and, while it will work in short-action rifles, it needs a 3-inch magazine box to work with the best 6.5mm bullets. Ballistically, the 6.5×284 Norma is very similar to the .270 Winchester.

With some help from other savvy shooters, Bill Alexander of Alexander Arms developed the 6.5mm Grendel, which was based on the 7.62X39 Russian case. It was intended to provide a highly accurate, flat-shooting, AR-15 alternative to the .223 with low recoil. You’d think it would have been an instant hit. It wasn’t. This was because the 6.5mm Grendel was trademarked by Alexander Arms. Because it was not SAAMI-approved, other manufactures ignored it. That changed in 2011, and many now consider the Grendel one of, if not the, best hunting cartridge for the AR-15. Folks either do not give two snots for it, or they believe it akin to the second coming. It is generally loaded with a 120-grain bullet at about 2400 fps.

One of the newest yet most-overlooked 6.5mm cartridges is the 26 Nosler. It was the first cartridge produced to wear the Nosler headstamp, and it is indeed a magnum. Pushing a 140-grain bullet to nearly 3300 fps, it will easily outperform the .264 Winchester Magnum. Like the 28, 30, and 33 Nosler cartridges, the 26 Nosler is based on the beltless .300 Remington Ultra Magnum case. But also, just like those other Nosler Magnums, it is mostly only available in rifles from Nosler. To some extent this explains why it is overlooked, but ballistically speaking, it is one of the most powerful 6.5mm rifle cartridges available.

Weatherby created the 6.5-300 Weatherby Magnum by simply necking down the .300 Weatherby Magnum cartridge case to accept a 6.5mm bullet. The result was a six-five that offered blistering velocity; it’ll drive a 140-grain bullet to nearly 3400 fps. The cartridge was initially met with a lot of fanfare, but interest died off quickly, partly because it was only available in Weatherby rifles, partly because ammunition was expensive, and also due to worries of barrels being shot out too quickly. All of this has shied buyers away from this lighting rod, but it doesn’t take away from its impressive performance.

The 6.5 Weatherby RPM (Rebated Precision Magnum) cartridge was Weatherby’s rethought and better attempt at a 6.5mm cartridge. This cartridge is a bit different than others from Weatherby. It does not have a belt at the base nor the customary Weatherby radiused shoulder and was designed to go with an ultralight hunting rifle. With its rebated rim and 1/2-inch diameter at the base, it is basically a longer version of the 6.5-284 Norma. Ballistically, it is the equivalent of the .264 Winchester Magnum, and just like the .264, this is an ideal long-range big-game cartridge.

In 2018 Hornady gave shooters the .264 most had been dreaming of and called it the 6.5 PRC (Precision Rifle Cartridge). Working with George Gardner of GA Precision, Hornady settled on the parent case of the .300 Ruger Compact Magnum. The PRC has the same overall length as the 6.5 Remington Magnum, and the ballistics are almost identical. The primary difference is the PRC’s case is a bit shorter to work better with high-BC bullets, and it has no belt. It offers a great balance of power, trajectory, and recoil, and is becoming very popular for competition and hunting. Remington almost had it right way back in 1965, and neither they nor anyone else knew it for another 53 years.