11 Budget Rifles, Shotguns, and Handguns From the 2022 SHOT Show

Looking for a bargain? Our experts pick the best guns for the money from this year’s crop of new long guns and sidearms 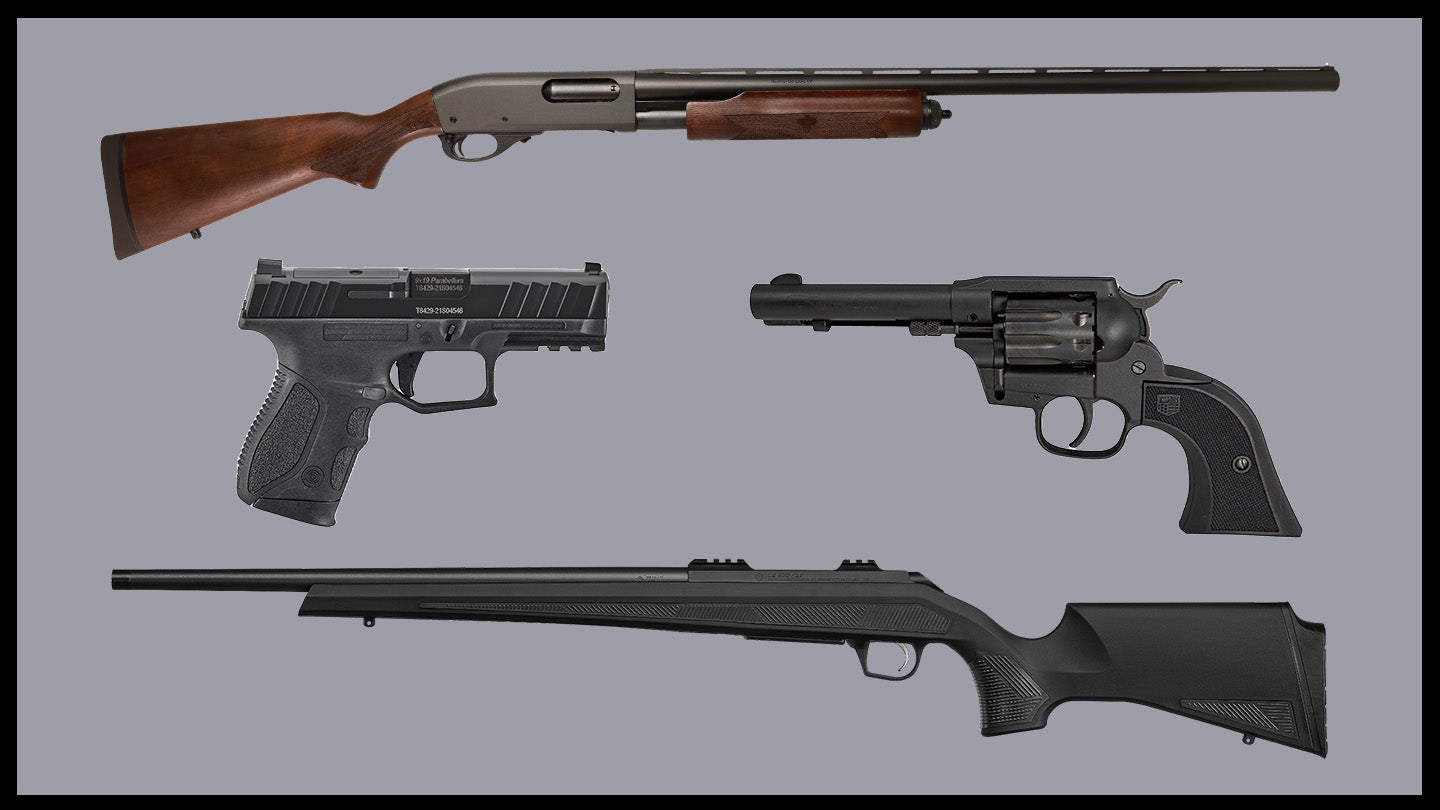 On a budget, like most of us? Not to worry; there are plenty of great affordable guns in 2022’s crop of new rifles, shotguns, and sidearms. In fact, they’re better than usual, as a group. The bargain-gun market has often been a race to the bottom, and contest to see who can make the absolute cheapest gun that still does the job. There’s something to be said for that, and there are some example of it below. But this year, manufacturers seem to be focusing more on value than on rock-bottom prices. Instead of sub-$500 rifles and $300 pump shotguns, we’re seeing $600-$800 rifles and $600-$1,100 shotguns that are better-made, better-looking, and come with some of the extras you expect to see on pricier models, like weatherproof finishes, threaded barrels, adjustable triggers, and more.

This is a good thing. A rifle, shotgun, or handgun is something you apt to have for a very long time. Better to pay a little more for a better gun—and still know that you got a lot for your money. You’ll find plenty of good examples in this rundown of the the best budget guns for 2022.

You might not expect one of the most affordable bolt-action hunting rifles of the year to come from a company known mainly for building muzzleloaders, but CVA’s new Cascade SB (Short Barrel) rifles go for under $700, and for that you get very handy gun with lot’s of nice features. The new Cascades feature a 4140-carbon steel barrel with a threaded muzzle, and the bolt only has a 70-degree throw and features a smooth round handle. The rifle feeds from a four-round magazine that fits flush with the fiberglass reinforced stock, which has a SoftTouch finish for optimum handling in harsh conditions. The barrel is coated with Graphite Black Cerakote, and the fiberglass-reinforced synthetic stock has a Veil Tac Black pattern. The stock also has an adjustable length of pull to fit youth hunters or adults. The new Cascade SB rifles in 6.5 Creedmoor and .308 have 18-inch barrels, while the .300 Blackout has a 16-inch tube. All comes with an MOA accuracy guarantee. —Richard Mann

CZ shotguns are always a good value, and none moreso than the Bobwhite, a classic, no-frills upland double. For late 2021 (which we’re counting as 2022, because who wants to remember 2021?), CZ added two new variations on the affordable Bobwhite G2. The big news is the Southpaw version, which has a cast-on stock bent for left-handers. It comes in 3-inch 12- or 20-gauge models, with 28-inch barrels. There’s also a right-handed Intermediate version with a slightly shorter stock and 26-inch barrels. In any configuration, the Bobwhite G2 is a bare-bones but classic upland shotgun at a very affordable price. It has two triggers, extractors, and a manual safety, just as many traditionalist bird hunters prefer. It also comes with five chokes and can handle steel or even the HeviShot and TSS, which you can buy with the money you save by shopping smart and getting a Bobwhite for just a touch over $700. —Phil Bourjaily

The new for 2022, the 600 Alpha from CZ is loaded with features for right around $750. The rifle is built on a lightweight aluminum receiver that incorporates an integral two-piece Picatinny rail for scope mounting. The action is housed in a black fiber-reinforced stock with a comb that is parallel to the bore and optimized for modern shooting styles. The stock also has serrated SoftTouch inserts located in common grip zones. The Alpha has a large bolt handle, feeds from a detachable box magazine, and the semi-heavy barrel is suppressor ready. Barrel lengths vary from 18 to 24 inches, depending on which of the nine centerfire cartridges the rifle is chambered for. The trigger is adjustable, and a two-position safety is standard. Combined with the excellent sub-MOA reputation CZ rifles have, the 600 Alpha offers a lot of value. —R.M.

Diamondback firearms built their reputation by making affordable, ultra-compact, semi-auto pistols for self-defense. They’re probably the last company you would expect to introduce a .22-caliber single-action revolver. But here it is. The Sidekick is a new twist on an old design. Unlike most single-action revolvers, this one has a nine-round cylinder that swings out from the left side of the frame, like a double-action revolver. Each Sidekick is shipped with two cylinders, one for the .22 Long Rifle and one for the .22 Magnum. This swing-out cylinder may not ideally fit the cowboy image, but it does make loading and unloading easier. In fact, you can switch cylinders faster than you can reload. —R.M.

With a Mossberg MVP rifle, it’s possible to have a bolt-action companion to your AR-10 or A-15 that fires the same ammunition and uses the same magazines. For 2022, Mossberg has added the .300 Blackout chambering to the MVP Patrol line. If you’re interested in shooting suppressed, the .300 Blackout is the best cartridge for the job, and this new Mossberg comes with a threaded muzzle and an A2-style flash hider that can be removed for suppressor installation. With the rifle’s short 16.25-inch barrel and overall length of only 36.5 inches, it is ideally suited for use inside a blind or for carry inside a vehicle or on an ATV. Even with the heavy barrel, the MVP Patrol is only 6.5 pounds. A user-adjustable LBA trigger, pillar-bedded stock, and a Picatinny top rail for scope mounting are all standard. And, with a retail price of under $650, you’ll have cash left over to buy that suppressor. —R.M.

The new FieldMaster costs more than the old Remington 870 Express it replaces, but it is still a good deal, and probably a better value now in its new incarnation. For one thing, it will work right out of the box, which was not always the case with the old Express. The new gun also features a grade-A walnut stock with the classic Wingmaster Fluer-de-Lis checkering, improved wood to metal fit, and an upgraded metal finish that’s much more rust-resistant than the finish on the Express was. The receiver is drilled and tapped, and the gun comes with swivel studs. RemArms says they have improved the action bars to smooth the gun’s cycling too. It comes with IC, M and Full chokes in place of the single Modified of the old Express. Besides being a solid value, it’s a good sign for things to come from Remington’s new owners —P.B.

Retay has made its reputation selling very nicely fit and finished inertia semiautos at prices that undercut more famous makers by hundreds of dollars. Now they are bringing out the GPS-XL pump gun that has some interesting features for not much money. “GPS” stands for “Geometric Pump System,” which the company says has a much shorter stroke than other 3½-inch slide-actions. The gun has a deep-bore-drilled barrel in place of a traditional hammer-forged tube, which is meant to produce more consistent patterns. The black-synthetic stock version will go for just over $400, and the camo versions for just under $500. —P.B.

If there was ever a .22 pistol that everyone ought to have, it’s the Ruger Single Six. They make great trail guns and great first handguns, but these days a new Single Six will cost you nearly $800. To give customers a similar but more-affordable option, Ruger introduced the Wrangler in 2020, which was sort of a Single Six clone, but built on an aluminum-alloy frame with a Cerakote finish. The Wrangler was an immediate hit because it allowed shooters to feed their inner cowboy for a lot less money, and now, for 2022, Ruger is offering a new Wrangler with a shorter 3.75-inch barrel and a birdshead grip frame. The new Birdshead Wrangler will be available with either a Black, Silver, or Burnt Bronze Cerakote finish, and it goes for under $300. —R.M.

Generally speaking, the most popular handgun in America right now is the ultra-compact, 9mm semi-automatic. This is because more and more people are realizing they’re responsible for their own safety and are looking for the optimum handgun to carry concealed. Stoeger, which is well known for their shotguns, also manufactures a 9mm pistol known as the STR-9. For 2022, the company has shrunk the STR-9 down to ultra-compact proportions. The new STR-9SC is a polymer-framed, striker-fired, 9mm Luger, semi-automatic pistol that is only 6.5 inches long and weighs less than 23 ounces. Three-dot sights are standard, but night sights are available, and a version with a removable slide plate to allow for the attachment of a mini-reflex sight can be had as well. Regardless the version you choose, the STR-9CS retails for less than $400. —R.M.

With the 16 gauge’s mini-revival in full swing, it’s nice to see more offerings, especially in guns made for upland hunting, and even more especially if those guns are affordable and classic, like this one. TriStar has extended its line of value-priced Bristol side-by-sides this year with a new 16-gauge version. The Turkish-made, single-trigger double guns come in two versions, including a pistol grip model with a silver receiver and a case-colored, straight-grip model (shown). Both guns feature ejectors and 28-inch chrome-lined barrels, and they come with five interchangeable choke tubes. Built on true, scaled 16-gauge frames, they are listed at 6½ pounds, which is about ideal for a 16. The stocks are select walnut with oil finishes, giving these guns a classic look. You can certainly argue that any gun over $1K isn’t cheap, but you can’t say this one isn’t a bargain, because you get a lot here for your money.

Like the TriStar, Winchester’s SX4 may not be cheap, but it is another great buy considering what you get —and how much more you have to spend (hint, about twice as much) to move up to most manufacturer’s flagship semiauto. New for 2022, Winchester has added this left-handed model to the lineup. Other than being made with the ejection port on the left side, the LH SX4 is no different than the right-handed version. It’s built around a reliable gas system and features an oversize safety, bolt handle, and bolt-release button. The alloy receiver keeps weight down, the gas system keeps recoil at bay, and the gun comes in walnut, black synthetic, and camo versions starting at less than $1,000.