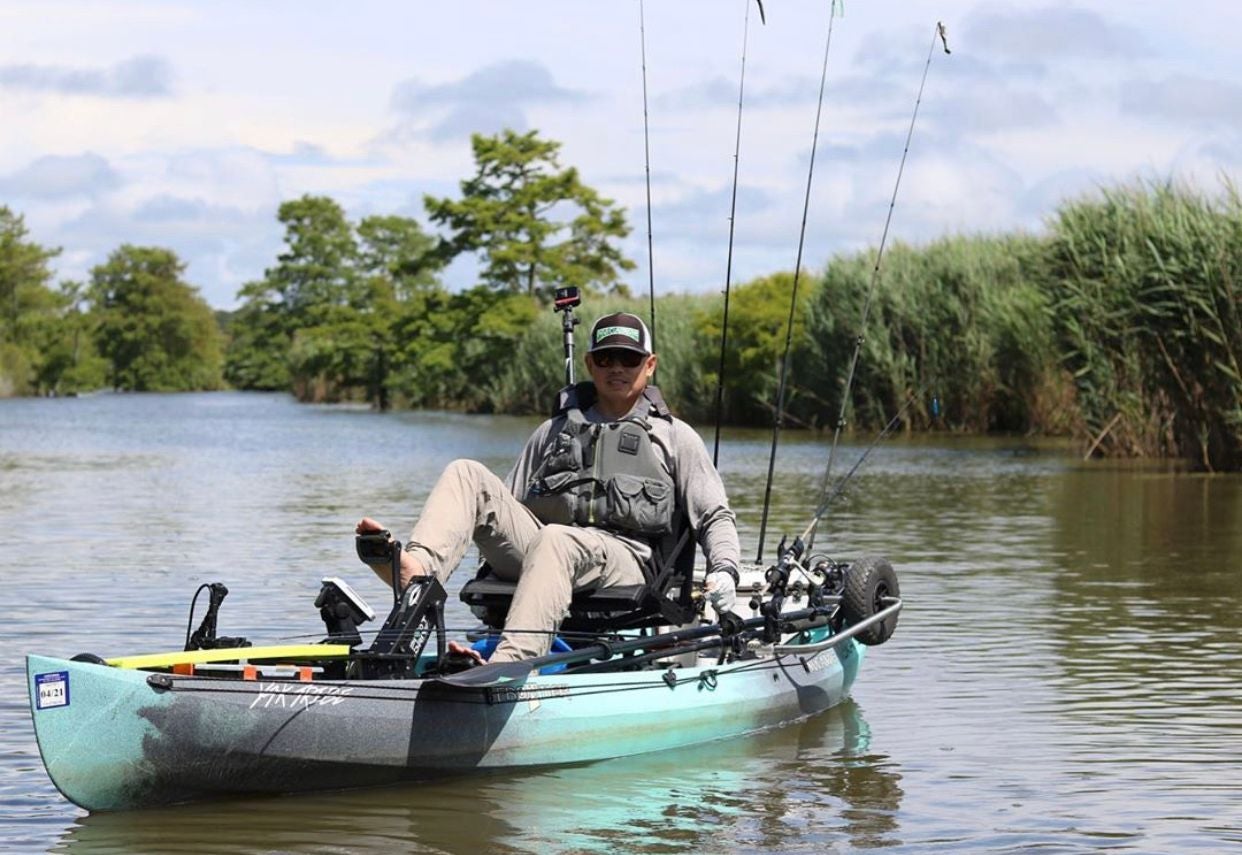 After he invented the sit-on-top kayak, southern California designer Tim Niemier set his sights on reimagining his creation. The first sit-on-top kayaks were unstable, harder to paddle, and a little intimidating. Niemier’s idea was to make kayaking easier. The result is NuCanoe, a hybrid kayak and canoe aimed at getting more people on the water. The NuCanoe has room for two paddlers and a wide-open deck from bow to stern like a canoe. A single paddler can also propel the NuCanoe with a double-bladed paddle like a kayak. Since the concept’s birth, anglers have taken the NuCanoe to new levels by adding motors, power anchoring systems, and full electronics. Still, the boat remains popular with new anglers looking for a stable, simple sit-on-top kayak for fishing with friends, family, and dogs. By combining the best elements of both a sit-on-top kayak and canoe, the NuCanoe Frontier 12 is the best fishing kayak for newbies and tournament pros.

What Kind of Fishing Kayak is the NuCanoe Frontier 12?

The NuCanoe Frontier 12 is the first NuCanoe model designed specifically for fishing. At 12-feet long and 41-inches wide, with a flat, stable hull and open cockpit, the Frontier 12 fits into the stand-up, paddle-kayak class with boats like the Bonafide SS127 and Old Town Topwater. The wide boat with high sides is safe, light, and easy to operate, making it perfect for new anglers. At the same time, the Frontier’s open layout is popular with tournament anglers looking to rig the platform with a full array of electronics, rod holders, and storage. As a paddle kayak, the Frontier’s hull is efficient and seaworthy compared to other stand-up kayaks. And, the boat is designed to rig with pedals or a motor.

Key Features of the NuCanoe Frontier 12

Simplicity is at the center of the NuCanoe Frontier 12 design. The lack of standard features is the boat’s greatest feature. Like a blank slate or empty canvas, the Frontier 12 is designed to be a starting point for each angler’s creativity. Still, NuCanoe added small touches that make a big difference.

With the picnic angler in mind, a day hatch in the bow with a gear bucket insert is perfect for holding lunch and dry clothes. One of my favorite features is the horizontal rod holders with rod tip protectors. When I’m carting the kayak through the woods or fishing in heavy cover, I can store my rods on the deck and out of the way of low-hanging limbs.

Two short gear tracks in the bow are convenient for mounting electronics and rod holders. Two more gear tracks in the tankwell secure a gear crate or live well within reach. A huge, 70-inch gear track runs down either side of the cockpit. In addition to hosting the “Fusion 360” seat, the long gear tracks offer more options for mounting gear and electronics. NuCanoe recently upgraded to aluminum, top load gear tracks on the Frontier 12. The new tracks are tougher than plastic and make it easy to insert and remove accessories.

NuCanoe reimagined the kayak seat, too. The Frontier 12 comes standard with a bench seat. To improve comfortability, the Fusion 360 seat is well padded and quick-drying with a full-size frame. Unlike any other seat on the market, the Fusion 360 spins in any direction. Not only does the full-function seat make fishing easier and more comfortable, it also allows the angler to access fishing gear in the stern or operate a tiller-drive outboard motor.

A Note on the Pivot Drive and Motor Options

The Frontier 12 isn’t a pedal kayak, but NuCanoe offers the Pivot Drive as an aftermarket upgrade. A pedal unit attaches to the gear tracks in the cockpit and connects with a flexible shaft to a propeller in the stern. The driver rotates the pedals to turn a shaft and spin the prop. A handle next to the seat controls direction. Since the Pivot Drive lower unit turns like an outboard motor, it is more responsive and maneuverable than a pedal kayak with a rudder.

For anglers looking to add electric or gas power, the Frontier 12 is one of the most popular platforms. The wide, square stern is perfect for an electric outboard or small gas motor. Some anglers choose to add a trolling motor to the bow with an aftermarket mounting plate. I’ve even seen Frontier 12 kayaks with an electric motor on both the bow and stern. Like a bass boat, kayakers use the stern motor to the fishing grounds then switch to the bow motor while fishing.

Like most stand-up kayaks, the NuCanoe 12 paddles well enough to cover a short distance in sheltered water, but rigged with a motor or pedals, the boat will go almost anywhere.

How We Tested the NuCanoe Frontier 12

I’ve seen NuCanoe Frontier 12 kayaks rigged with electric motors, outboard engines, full electronics, PowerPole, and lights. But my favorite NuCanoe story is from the other side of the boat’s character. I use the Frontier 12 for family trips and easy fishing.

A few years ago, my ten-year-old daughter Dasha and I were fishing the Tidewater Kayak Anglers Association’s Kayak Fish for Charity tournament. Since we were in the tournament for fun, Dasha and I decided to fish together in the same kayak. I grabbed the NuCanoe, one of the few sit-on-top kayaks that can go from single-person kayak to tandem, and a couple of rods.

On the way to the fishing hole, we both paddled the kayak while deciding where to fish. We don’t usually fish in the same kayak, so going tandem was a fun way to fish a tournament.

After an hour, we found a good speckled trout bite, and it didn’t take long before Dasha and I were competing against each other for the biggest fish. She ended up catching a 22-inch speck, winning our personal tournament and the Fish for Charity youth prize for largest trout. Dasha won a new kayak, which she donated to Heroes on the Water. Being able to fish together made the experience even more enjoyable.

While there are plenty of tandem fishing kayaks on the market, the NuCanoe is one of the few that can effectively go from a single seat to double. The long gear track on the deck allows me to move the seat to the middle when I’m alone or move it back and add a second seat to invite a guest.

The ability to go from single-person kayak to tandem is only one of the Frontier’s great qualities. Anglers looking for a kayak they can customize into their ideal fishing platform love the NuCanoe’s open design. Rig the Frontier to the gills or leave the boat empty—whatever suits your needs, the Frontier is ready to deliver.

I like the Frontier 12 for quick, fun trips with the family, but other guys take the boat to the next level. Atlanta-based guide River Wolf uses a NuCanoe with a two-horsepower outboard to target big striped bass on Georgia rivers and lakes. Other anglers take the NuCanoe offshore into the open ocean by rigging the little kayak with a small outboard. Then there are the tournament anglers who pack the boat to the gills with gear and tackle. You can check out their creations online. These anglers love the Frontier’s 600-pound weight capacity, which turns the kayak into a mini skiff.

As a full-size paddle kayak focused on stand-up fishing, the NuCanoe Frontier 12 is one of the best fishing kayaks with a stable, open deck. On a rough day, high sides and a flared bow cut through the water. A slight rocker and looser secondary stability (the ability to lean the kayak to the side) make the Frontier 12 one of the most maneuverable stand-up kayaks. The simple hull also cuts weight compared to a tunnel hull kayak with more above-the-water features. Not only does this make it easier to paddle the Frontier 12, but the boat is easier to transport and store. I can load the Frontier on a car top, and the kayaks can be stacked to store more than one boat in less space.

Of course, any stand-up kayak is going to suffer from wind, waves, and current. Even though the Frontier 12 is light and simple, the kayak is big and wide with high sides making it difficult to paddle for miles in bad weather. The flared bow helps the boat ride over the waves, and loser secondary stability allows it to roll with the punches, but this is not the best boat for open water paddling. While the boat will handle these conditions, it’s not the best platform for long, open-water expeditions.

The NuCanoe was initially designed to get new anglers into the game and give experienced anglers a high-capacity, open platform for loading equipment, whether it be for camping, hunting, or fishing.

Almost every manufacturer has added a pedal model to their lineup and included design features for installing an electric motor. While the NuCanoe pedal system isn’t as efficient as other pedal kayaks, the Frontier 12 is unmatched for upgrading to an aftermarket motor.

The Fusion 360 seat is comfortable and functional. The seat spins 360 degrees to make it easier to access fishing gear in the stern of the kayak. The angler sits high off the water for a more comfortable fishing position and a better view of the surroundings. However, the high seat does make the boat a little more wobbly, without any danger of flipping over. The high seat position also catches more wind and the use of a longer paddle is less efficient.

For a stand-up, sit-on-top kayak, the Frontier 12 paddles easily with manageable tracking and speed. It’s not the fastest boat on the water, but it is one of the most stable. The weight capacity makes the Frontier 12 one of the best paddling big boats. Compared to boats with a tunnel hull, like the Wilderness Systems Radar and Old Town Topwater, I think the Frontier is more maneuverable for standing and paddling in tight places. But, it may not track as well or paddle as fast as the competition.

What the Frontier 12 Does Best: Hunting, Fishing, and Family Fun

Backwater anglers love the Frontier 12 for sneaking into hidden honey holes. The shallow draft and low profile are perfect for shallow, narrow water. Duck hunters load the boat with their decoys, bags, and blinds. The open cockpit makes the Frontier 12 popular with fly anglers who need to stand and fish with plenty of space for fly line. Guides use the Frontier 12 to host clients in a safe and stable kayak. At the same time, the Frontier is one of the best kayaks for taking the kids and dog for family fun.

What the Frontier 12 Does Worst: Long Distance and Open Water

The Frontier 12 is all about easy fishing and versatility. However, the boat is not best for open water paddling or river rapids. The wide beam, high sides, and flat hull are geared towards stability and capacity but not as easy to paddle for miles in rough seas. The shallow draft and relatively loose secondary stability make the Frontier 12 capable of running a river, but the boat is wide and heavier than an ideal river kayak.

Does the NuCanoe Frontier 12 Deliver On Its Mission?

The hybrid kayak and canoe design make the Frontier 12 one of the most unique fishing platforms. The simple, open design is user-friendly for new anglers and quick fishing trips. On the other end of the spectrum, the Frontier 12’s incredible capacity and customizable layout are perfect for rigging to the max with electronics, fishing gear, lights, and a motor. When Tim Niemier designed the first NuCanoe, his objective was to “put a million butts in boats.” With the addition of pedals, motors, and frame seats, the versatile Frontier 12 is a kayak for anyone.