Crossbow Review: The Ravin R500 Is the Fastest Crossbow Ever Made

We did a hands-on test of the new Ravin R500 for accuracy, handling, broadhead flight, trigger pull, speed, and more. Does it really hit 500 feet per second? 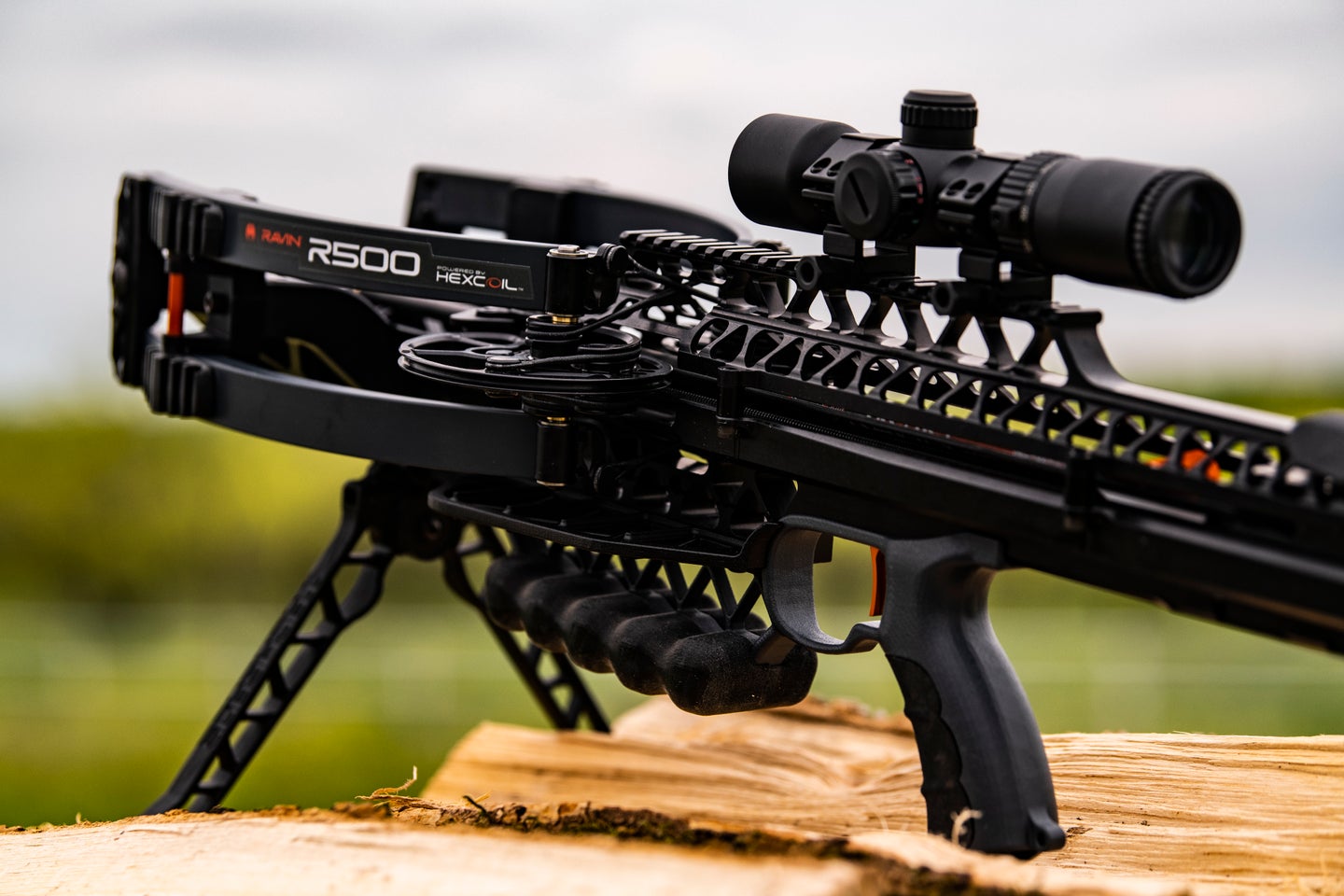 The all-new Ravin R500 is a scorcher. Ravin
SHARE

No other brand can make a buzz in the crossbow world quite like Ravin. They definitely got bowhunters…er, crossbow hunters…talking last winter when they teased the all new Ravin R500, billed to be the world’s first commercially available 500-feet-per-second crossbow. Trouble was, despite the hype and the listing of the crossbow for sale on their website (where it’s back-ordered), the R500 hasn’t been available since it was announced.

I got an assignment to write a review on it back on January 11, and I kept checking in with contacts at Ravin all spring and summer about getting a test model. I was told that a crucial part took over 20 weeks to arrive, and so production of the Ravin R500 was stalled. But it seems the wait is over because early last week, I finally got a new R500 in hand, and I’m told mine is the first one out for review.

Several accessory-package versions of the crossbow are available, including the E series, which has an electronic cocking device. I tested the base model, which has a new (but fairly simple) draw-handle system in lieu of the electronic cocker. You crank the handle and load the crossbow with old-fashioned elbow grease. Each turn of the handle spins a pair of long, parallel threaded rods that run the length of the barrel. Those rods guide the trigger assembly (called the Trac Trigger Firing System) down the barrel and to the string. According to Ravin, it takes 17 pounds of effort to cock the bow (the limbs are 300 pounds). After shooting it extensively, my official evaluation is, that sounds about right.

This is a different cocking mechanism entirely than the strap that’s been connected to the Ravin trigger assembly and wound back into the stock on previous models. On the Ravin R500, there are no latches or buttons to depress in order to release the strap and cock the bow. You can stop or start the cocking procedure at any point without putting anything (other than the bow limbs and strings) under tension. Once you hit full draw, a slip clutch engages, preventing you from overdrawing the system. If you want to decock the bow, simply attach the handle and spin the crank the opposite way. It couldn’t be more intuitive. Wind it up, or wind it down.

Scopes for the Ravin R500

The entire rail of the crossbow, including the threaded rods, is enclosed by a skeletonized protective shroud. A 9-inch picatinny scope rail sits atop that, and the bow comes with a 30mm scope. (The type scope you get varies depending on the package.) My test bow’s scope has an illuminated reticle graduated to 100 yards. Interestingly, the top circle is 30 yards instead of the usual 20; this bow shoots so fast and flat that there’s no difference.

The Ravin R500 is a bullpup design, reminiscent of the ultracompact Ravin R26 from a few years ago. It’s 29 inches end to end, and 18 inches of that is power stroke. For perspective, the 400-grain bolts are just 21 inches long—field point and nock included. This crossbow makes use of every inch of length.

Cocked, the R500 is about 3 ½ inches wide axle to axle, as advertised, and the bow at its widest, from one limb dampener to the next, is 8 inches. With accessories installed, quiver and arrows included, the R500 weighs 10 ½ pounds. Its power comes from the beefy limbs and the outsized HexCoil system, which rotates the cams a full 360 degrees. (The older HeliCoil system rotates cams 340 degrees.)

The R500 uses proprietary Ravin bolts (the warranty is void if you use anything else), and they weigh 400 grains, give or take, with a 100-grain field point or broadhead installed. Though similar in appearance, they are different bolts than the ones used for other Ravin models.

I tried to eek 500 feet per second from the bow through my chronograph, but 498 was the fastest I could get—with 496 being the average. Maybe my chronography reads a little slow. But even if does, you’re difficult to please if that’s not fast enough for you. The R500 is far and away the one of the fastest crossbows I’ve ever tested by a wide margin, and the most powerful, too, producing 220 foot pounds of energy.

How Does the Ravin R500 Shoot?

The trigger on the Ravin R500 is excellent, with an average pull weight on my Lyman scale of just under 2 pounds, with just a little take up. You can’t shoot at the same spot twice at 30 yards without breaking bolts. I measured accuracy by shooting groups at 60 yards off a Caldwell Deadshot Field Pod. They averaged 1 1/8 inches—and with a real bench rest, I bet they’d have been through the same hole. The accuracy potential of this crossbow is incredible.

Can a Crossbow Be Too Powerful?

There are some downsides to all that power, though. As I’ve seen with several other 400-plus-fps crossbows, broadhead flight gets a little elusive at high speed—and there’s not always rhyme or reason as to which head flies best. During my test, I tried a couple different fixed blades and struck out with all of them. I’m not a fan of mechanical broadheads on game, but at these speeds, a small in-flight profile seems to work best. I ultimately got the best flight—virtual field-point accuracy—with the Sevr 1.5 Titanium mechanical. I had to adjust the scope and move the point of impact a few inches (the broadhead is a 125-grain model) and spin the magnification dial out just a bit to match the slightly slower speeds.

Read Next: The Best Crossbow Broadheads for 2021

That particular broadhead has a blade-locking system that allows you to practice without dulling the blades (a good thing, since they run $15 apiece). If this were to become my go-to hunting crossbow, I’d keep trying other mechanicals until I found one with a wider cutting diameter that flew as well (maybe one of the other Sevr models). Just like a good rifle, a high-speed crossbow might require a little time on the range before you settle in on the perfect broadhead. And hell, if you’ve spent $3,500 on a crossbow, what’s another couple hundred on broadheads?

Arguably the bigger drawback is how tough the bow is on targets—and its own arrows. I shot right through a lightly used Block target at 30 yards, wrecking a fletching on my very first arrow. A Morrell High Roller was better at stopping the bolts, but anything tipped with a field point was a real pain in the ass to pull from the target. I also had a couple bolts hit so hard the inserts dislodged and shot out the back side of the target. Nocks were routinely slightly dislodged and twisted, too. If you’re shooting an Ravin R500 very often at all, buy several extra boxes of bolts, and check them frequently. They take a thrashing, and won’t last long.

The dead horse I’ve been beating about crossbow performance and innovation is starting to fester so badly that every swing of my club ends with a squishier thump. The envelope of crossbow innovation and performance continues to be pushed, and you can’t blame manufacturers one bit for doing that. Personally, I don’t think the R500 belongs in a regular archery season. An extended crossbow season? Sure. But the trend with most state agencies seems to be relaxing the regs and calling a crossbow a crossbow. And maybe we do have bigger fish to fry.

Ravin fundamentally changed the way we thought of high-performance crossbow design a few short years ago, and the Ravin R500 is another radical departure from even that original design. Having tested just about all the Ravin models up to this point, I think the R500 is actually a little easier to use out of the box than its ancestors. It’s a touch heavier but just as compact and of course, it’s crazy accurate. If you absolutely cannot sleep at night because your crossbow isn’t faster’n all the rest, and you don’t mind spending more than $3 grand to rectify it, then, by God, the Ravin R500 is the crossbow for you.