Recurve vs Compound Bow: How to Choose the Best Type of Bow for You

Bowhunters like to argue "recurve vs compound bow," and which is the more effective hunting tool. Here's what you need to know about each, so you can settle the debate 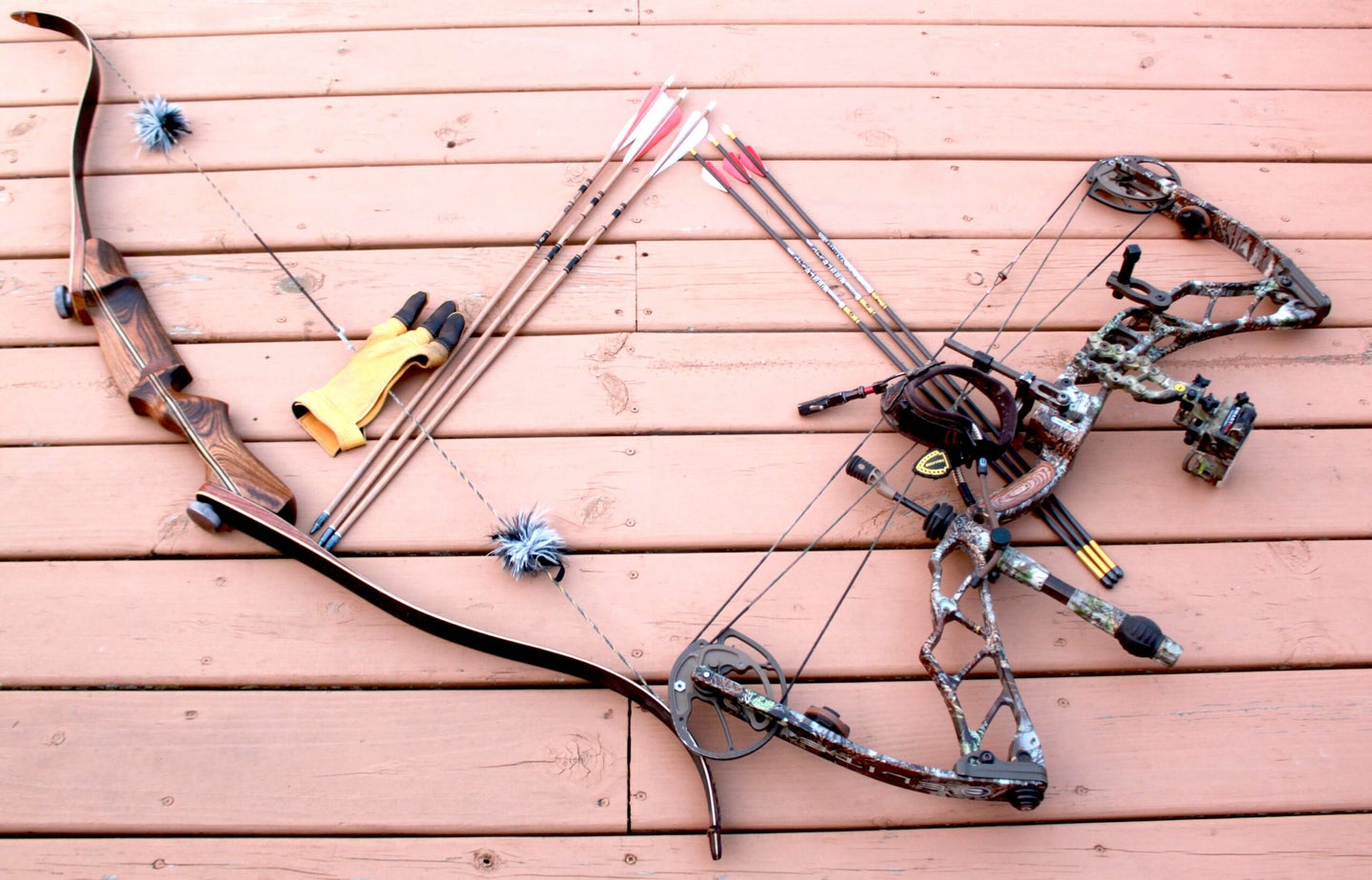 A recurve (left) and a compound bow. Scott Bestul
SHARE

I still remember the first compound bow I ever saw. My dad and I belonged to an archery club in Wisconsin in the early 1970s, and everyone there shot recurves. But my dad’s cousin Howard was visiting and wanted to shoot with us. Howard had bought one of the first Allen compound bows ever to hit the market, and when he uncased that bow, a proverbial hush fell over the crowd. Within seconds, we had two dozen hunters gawking at that strange mix of wood, cables, and wheels. “I’ve heard about those things, but I’ve never seen one,” said one stranger, as heads bobbed in wonder.

Fast-forward five decades, and the situation has radically reversed. Uncase a recurve at an archery shoot these days, and that bow will turn heads. These days, choosing to shoot a stickbow is a bit of a head-scratcher for many hunters. Why ignore the more modern compound for a bow that’s remained basically unchanged decades?

Read Next: Crossbow vs Compound Bow

Truth is, both are perfectly legitimate choices for the modern bowhunter. Sure, compounds are faster, easier to shoot well, widely available, and, unlike in cousin Howard’s day, generally accepted as the tool of the sport. But don’t sell the recurve short. This simple bow remains a deadly tool in the hands of those who master it. Here’s a look at what to consider if you’re choosing between a recurve vs compound bow.

The most obvious feature that differentiates the recurve is a lack of machinery or hardware. Instead, you have a simple, graceful arc of laminated layers of wood that combine to form the riser and limbs, and a string. That’s it. (Although some take-down models will have limbs that detach from the riser for easier transport.) The other glaring difference comes when you draw a recurve. You’ll notice immediately that, unlike a compound bow, a recurve becomes more difficult to pull the closer you get to full draw. And once you pull the bow back to that position, you’ll hold it there with nothing but your own strength. That’s why in order to shoot a recurve, you need a three-fingered leather glove or tab, unless your fingers are tough as a green oak stick.

Compound bows, on the other hand, are constructed of a riser (handle) section, usually of made aluminum or other lightweight material, with laminated synthetic limbs attached via metal brackets and bolts. At the end of each limb is a wheel-like device called a cam. The string stretches between these cams, which turn as you draw the bow. The rolling over of the cams creates “let-off,” which results in greatly reduced weight as you reach full draw. Cams also store energy, which allows a compound bow to shoot an arrow much faster. You can shoot a compound bow with your fingers, but for the most accurate shooting, you’ll use a mechanical release, a small hand-held device that clamps onto the bowstring and helps you draw, anchor, and release the arrow efficiently.

While arrow speed generated by a recurve bow can vary greatly depending on draw weight, limb design, and bow materials, it’s pretty safe to say that any recurve shooting 225 feet per second is pretty darn zippy. Even an entry-level compound can shoot that fast in its sleep.

Accuracy is the huge X-factor in the world of recurve shooting, as it is highly dependent on the shooter’s skill level and commitment to practice. Most hunters use instinctive shooting as their aiming tool. Instinctive shooting is much like throwing a baseball; you focus on the target and let your subconscious mind make the necessary calculations. Because a recurve bow is hard to hold at full draw for any length of time, you have milliseconds to make this calculation. As a result, mastering this method takes tons of practice, but centuries of hunters and warriors have done it. Recurves can also be shot with a sight, as the amazing archers at the Olympic archery competition will prove. However, most folks who commit to hunting with a recurve bow also want to learn instinctive shooting.

As noted, at the same speed recurves are maxing out, most compounds are just warming up. While manufacturer’s arrow speeds are routinely exaggerated, getting a compound to shoot 300 fps is not that hard, and if you’re willing to pull some extra weight, pushing the speed envelope beyond that is entirely doable. Arrow speed really doesn’t affect hunting performance much at short distances, but if you’re consistently flinging arrows beyond 40 yards it can be very helpful.

Read Next: The Best Compound Bows of 2021

Calibrated sights, fancy rests, precision releases, and the ability to hold practically forever at full draw make the compound consistently more accurate for the vast majority of shooters. And achieving good accuracy doesn’t require nearly as much practice. But you still have to put in your range time. Even with a compound, you have to do a lot of little things correctly in order to get the equipment to perform like it’s supposed to, and if you don’t train your brain and muscles to do their part, you can whiff big time—usually when it matters the most.

Recurve vs Compound Bow: Ease of Use and Handling

As noted, shooting a recurve well takes constant practice. There are no casual recurve hunters—or at least no good ones. You have to commit yourself to the process. Compared to a compound bow, recurves are not easy to use effectively, but most serious recurve fans love shooting, so practice is not a burden.

Recurves are typically longer than compounds, which make them tougher to handle in a pop-up ground blind. But one inarguable asset of the recurve is its extreme light weight. While most bare compound bows hover around the 4-pound mark, a recurve will max out at half that weight. Not only is a recurve lighter, but with no sights or other accessories, it just has a sleeker profile that’s easy to maneuver in the field.

Once you’ve got the basics of shooting a compound nailed down, staying hunting-accurate is usually a simple matter of shooting a few times a week. And while “buck fever” can make a fool of anyone with any equipment, the sight, peep, and release that are integral parts of compound shooting take a ton of guesswork out of hitting what you’re aiming at. Compounds are, therefore, significantly easier to use effectively.

They are, however, much heftier and bulkier than a recurve, which makes them a bit tougher to manage if you’re a ground-pounder. But the vast majority of bowhunting is done from stands and blinds, and most hunters hang or rest their bow until game is spotted. For most hunters, the makes the question of weight and handling less of an issue.

A proficient traditional archer can shine in some situations that would stymie a compound shooter. Recurves are quieter and lighter. And once instinctive shooting is mastered, they’re often faster to shoot than a compound. In fact, the second-biggest buck on my wall is a Minnesota whopper that I took with a recurve and required a shot that I’d have never made in the time it would take me to draw and aim a compound.

The downside of recurves is pretty simple: For almost all shooters, game needs to closer, often within 20 or 25 yards. While some will argue that getting that close to game animals is the whole point, there’s no question that the recurve shooter is going to let some critters walk that could easily be killed with a compound. As with so much in life, this is a trade-off. If passing a just-out-of-recurve-range buck is going to really bother you, go with the compound.

Compared to recurves, compounds are big, bulky, and kind of ugly. But holy cow they can shoot. With a compound, even relatively inexperienced archers can fling highly accurate arrows at distances recurve shooters wouldn’t think of shooting. Compounds are also highly adjustable, allowing shooters of all sizes, body types, and skill levels become proficient enough to shoot well in hunting conditions.

There may be one or two downsides to a compound. Killing small game and birds is one place where I’d tote a recurve almost every time. And as more than one person who’s shot both bow types has said, “Recurves are just more fun.” So there’s that. But when it really comes to hunting big game efficiently, a compound bow gives you a big edge.

Keep in mind, of course, that you don’t have to choose one or the other. I have two bows hanging in the shop by my home range. One is a fully tricked out compound, the other a recurve that I’ve hunted with for close to 30 years. Which one I shoot on a given evening is kind of a matter of mood, and I’ve got bucks on my wall that I’ve killed with both. And I’m proud of all of them.