12 Sweet-Shooting Shotguns from the 2022 SHOT Show

The return of the 870, a 28-gauge SBE 3, and a new Sweet Sixteen from Browning. Check out all of the hottest new shotguns from the 2022 SHOT Show 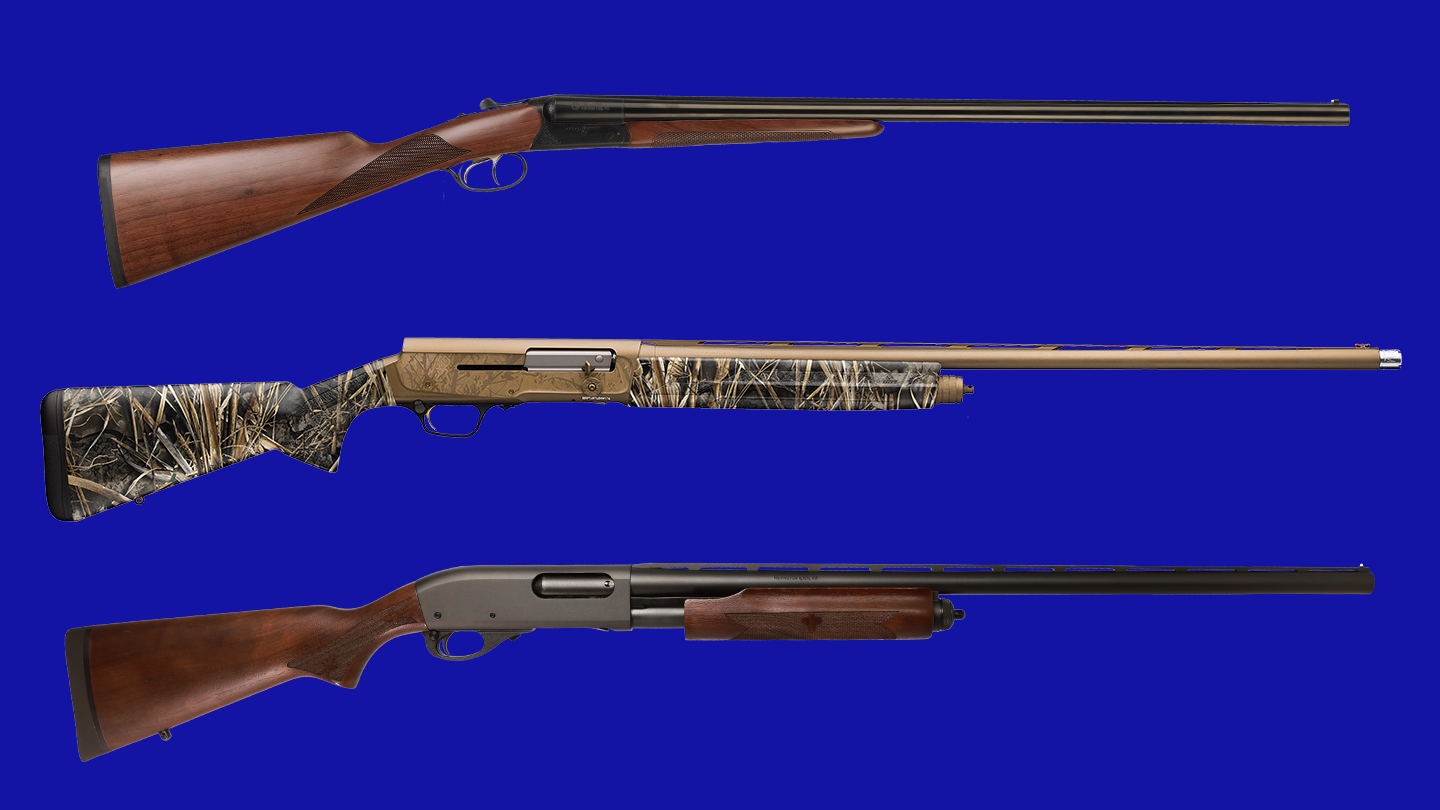 With most big names missing due to covid concerns, and many smaller shotgun makers no longer attending, SHOT 2022 will not be the shotgunner’s playground that the event was back when I first started attending in the 2000s. It is, however, still the time of year when we learn about the new guns for the coming season and try to discern what trends are emerging. One trend, for sure is comebacks—and the biggest comeback of year is the 870, as RemArms rolls out a new FieldMaster. Sixteen- and 28-gauge shotguns also continue their modest rebounds. Two of the most prominent introductions—one in 16 and one in 28—are waterfowl guns, clear evidence that the trend toward small-gauge duck guns continues. There are an increasing number of left-handed models, too, which I think reflects an increased awareness among shotgunners of the importance of eye dominance, because it’s not just lefties buying left-handed guns; it’s cross-dominant righties too.

Many of the guns in this gallery are brand-new, while some were soft-launched later last year, because anything 2021 could disrupt, it did disrupt. We’re counting the latter as part of the class of 2022 and hoping that a healthy crop of new shotguns is one of the many good things to come in the new year. And now, on to the guns. Here’s a first look at dozen exciting new shotguns for 2022.

Remington, now RemArms, has quit trying to compete with the Mossberg 500 and other inexpensive pumps, and has instead taken the higher road with the new 870 FieldMaster. This new shotgun replaces the old Express, which had been a good gun once upon a time until cost-cutting measures ruined it. The FieldMaster features a grade-A walnut stock with the classic Wingmaster Fluer-de-Lis checkering, improved wood-to-metal fit, and an upgraded metal finish that’s much more rust-resistant than the finish on the Express. The receiver is also drilled and tapped, and the gun comes with swivel studs. RemArms says that they have improved the action bars to smooth the gun’s cycling. The Fieldmaster also comes with IC, M, and Full chokes in place of the single Modified of the old Express. The gun will come in 12 gauge only for now.

Hunting ducks with small-gauge guns is becoming a bigger and bigger thing. To meet that demand, Benelli has rolled out a 28-gauge Super Black Eagle 3 for 2022. And it’s not just any 28. It’s a 3-inch magnum. Benelli has partnered with Boss, HeviShot, and Fiocchi to make 3-inch non-toxic waterfowl loads for the new gun, which should put the 28 on par with most 20s. It won’t be a gun for long-range work, but it should be just right for ducks over decoys.

The new 28-gauge SBE 3 looks just like the others, only smaller, and it shares all the same features. It has the ComforTech stock to reduce recoil, the Easy Locking bolt to prevent out-of-battery misfires, and it shares the trim lines of the SBE 3, plus a beveled loading port and two-piece carrier latch to make it easier to shove skinny 28-gauge cartridges into the magazine tube. It will come in black and a variety of camo finishes. In a related offering, Benelli’s 20-gauge SBE 3 will now be available with their proprietary, durable, and guaranteed BE S.T. surface treatment.

TriStar extends its line of affordable Bristol side-by-side shotguns with a 16-gauge model. The Turkish-made, single-trigger double gun comes in two versions: one is a pistol-grip model with a silver receiver; the other is case-colored, straight-grip version. Both feature ejectors and 28-inch chrome-lined barrels, and they come with five interchangeable choke tubes. Built on true, scaled 16-gauge frames, the guns are listed at 6½ pounds, which is about ideal for a 16. The stocks are select walnut with oil finishes, giving these guns a classic look.

Browning’s 16-gauge inertia semiauto gets the full “Wicked Wing” treatment to make it duck-blind-ready for 2022. It comes with a synthetic stock and forend in Realtree Max-7 or Mossy Oak Shadow Grass Habitat and a Burnt Bronze Cerakote finish on receiver and barrel. Other touches include an enlarged bolt-release button and extended choke tubes decorated to look like waterfowl bands. Underneath the fancy finish, the gun is the same Sweet Sixteen that almost singlehandedly put the 16 gauge back on the map for modern hunters. The humpbacked receiver houses a rotating bolt that cycles via an inertia system. In 16, this A5 is light and handy not only in the duck blind but also in the dove field or uplands. It comes with both shims and length spacers to let you tweak the fit too.

Franchi has expanded its Instinct line of O/Us with its most lavishly decorated model yet. This Instinct has two sideplates on the frame that allow extra room for case coloring, gold game birds, and engraving. It also features an AA-walnut stock with a satin finish to complement the deluxe sideplate appearance. The Instinct remains one of the best values available in currently made Italian O/Us. Beneath the sideplates, this is the same gun that has become popular among upland hunters (my regular hunting partner has three of these guns, for instance). It has the Prince of Wales grip and Schnabel forend as other guns in the Instinct line, and it comes with five extended choke tubes and a hard case. At more than $2K, it’s not cheap exactly, but you can’t touch a sideplated gun from another Italian maker for anything close to this price.

Winchester’s SX4, one of the most popular gas guns on the market, and a solid value considering you can spend twice as much on a 3½-inch gun, comes in a mirror-image left-hand version for 2022. This is news that will thrill 15 percent of the shooting public and probably bore the rest of you. But it’s a big deal for us lefties, and it’s the first southpaw semi-auto from Browning/Winchester that I’m aware of. Other than being built backwards, the LH SX4 is no different than the right-handed version. It’s built around an easy-to-care-for, soft-shooting, reliable gas system and features an oversize safety, bolt handle, and bolt-release button. The alloy receiver keeps weight down, and the gun comes in walnut, black synthetic, and camo versions.

Relative newcomer Retay has seen its well-made Turkish inertia semiautos become popular among duck hunters in the past few years. For 2022, the company has introduced a new pump gun. “GPS” stands for “Geometric Pump System,” which Retay claims has a much shorter stroke than other 3½-inch slide actions. The GPS also features a forearm that does away with the exterior tube that surrounds the magazine tube on other pumps and replaces it with a series of cones designed to reduce friction and wear. The GPS XL also features a deep-bore-drilled barrel in place of a traditional hammer-forged tube, which Retay says results in more consistent patterns. The gun has a 3½-inch chamber and lengthened forcing cones and comes in black-synthetic and camo versions.

CZ added two new variations on the affordable Bobwhite G2 double late last year. The big news (again for the left-handed and cross-dominant among us, at least) is the Southpaw version, which has a cast-on stock bent for left-handers. It comes in 3-inch 12 or 20 gauge, with 28-inch barrels. (There’s also an “Intermediate” version with a slightly shorter stock and 26 inch barrels.) In any configuration, the Bobwhite G2 is a bare-bones, classic double at a very affordable price. It has two triggers, extractors, and a manual safety, just as many traditional-minded bird hunters prefer. It also comes with five chokes and can handle any kind of non-toxic shot. You get all this for just a bit over $700.

Turkey hunters get some attention from Mossberg this year, as the company extends its 940 Pro series with a pair of dedicated gobbler guns. The 940 improves on the 930 with updated gas-system parts, corrosion-resistant internals, and a stainless-steel return spring. Both new 940 Pro gobbler guns feature cuts in the receiver for a RMR-footprint reflex sight (not included) and a cover should you choose not to mount one. The stocks adjust with spacers to as short as 13 inches, which is handy even for full-size hunters sitting against a tree. These 3-inch 12 gauges have Mossberg’s X-Factor turkey choke. Both guns have enlarged bolt handles and closer buttons and come with synthetic stocks in Mossy Oak Greenleaf camo. One has a 24-inch barrel, usually a length conducive to better patterns, while the other comes in at a compact 18½ inches, ideal for carrying and hunting in close quarters.

Fabarm introduces a new version of its excellent XLR gas semiauto for waterfowlers this year. The metal parts of the new Chesapeake have a Bronze Cerakote coating, and the stock and forend are in True Timber Strata camo. I’ve shot the target versions of the XLR enough to know they are reliable, easy to maintain, easy to shoot well, and are very soft-recoiling. Like all Fabarm shotguns, the Chesapeake features the TriBore barrel, combining a very long forcing cone with an overbore and a tapered section near the choke that patterns well and squeezes a few more feet per second out of some loads. The new gun comes with one extended and three flush choke tubes. There are also true left-handed models in both 28- and 30-inch barrel lengths.

The Fausti Dea isn’t new, exactly, but it bears Fausti’s new logo, representing a renewed effort to elevate the brand among American customers, which also means you should see more Faustis as the company expands its dealer network. Fausti makes good guns, a fact muddled by some of the branded guns the company once made, and the Dea SLX is perfect example. A classic straight-grip, splinter-forend double gun (albeit with a single trigger), the SLX features engraved sideplates and a stock of AAA walnut with an oil finish. It comes in five gauges, from a 6.8-pound 12 to a 5-pound .410. The 12, 16 20, and 28 all come with choke tubes while the .410 has a fixed choke.

Franchi’s 12- and 20-gauge Affinity 3 semiautos come in two camo-and-Cerakote finishes for 2022: Midnight Bronze and Max 5 or Patriot Brown and Bottomland. The Cerakote looks sharp and protects from rust and scratches, while the camo synthetic furniture helps these guns blend in and resists the elements. The Affinity offers a lot of the same advantages you get from the semi-autos made by parent company Benelli, but without the premium price tag. This one has the same reliable inertia operation and light weight, while adding an elevated rib and Franchi’s own soft TSA recoil pad. The 12-gauge comes in 28-inch barrel length (Max 5 model) or 26-inch barrel (Bottomland), which is evidently intended to be the flooded-timber Affinity. Both 20-gauge models have 26-inch barrels.