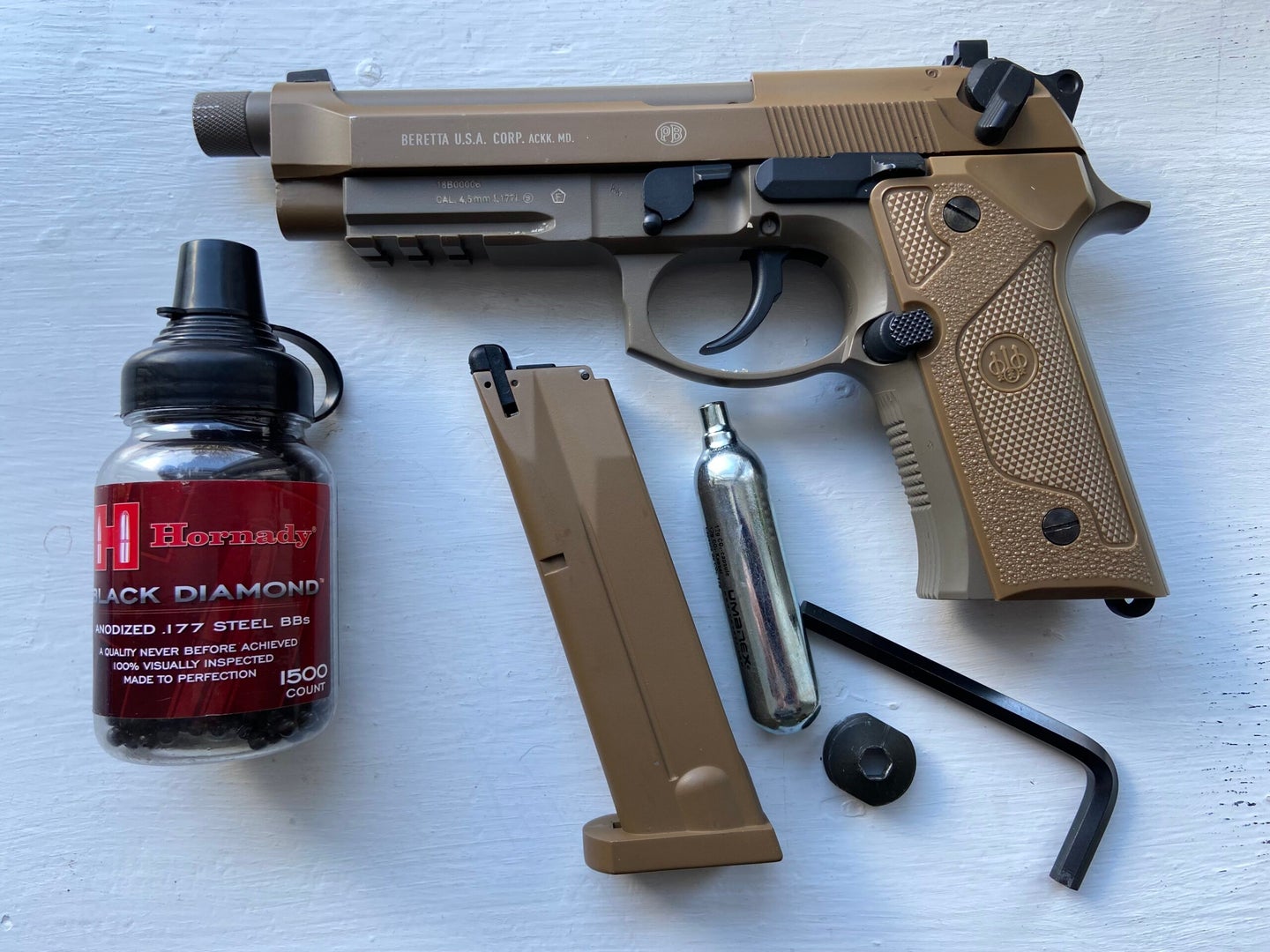 Among the many officially licensed replica air guns produced by Umarex, the company’s replica of the Beretta M9A3 is unique. Like many of the company’s offerings, it is a CO2-powered, semi-automatic BB gun with full blowback function, serving as a great stand-in for the firearm version for training. Unlike the powder-burner, however, this version has a little extra bonus — a full-auto setting.

What Kind of Air Pistol is the Umarex Beretta M9A3?

The Beretta M9A3 is a realistic looking and feeling replica of the well-known semi-automatic firearm. Like many of the replica air guns offered by Umarex, this BB pistol has a dual purpose. Shooters who own the firearm version will find it a functional and economical stand-in for the firearm. It’s also a hoot for plinking and quiet enough to be backyard friendly.

The Beretta M9A3 uses a single, 12-gram CO2 cartridge to send BBs downrange at roughly 330 feet per second. The CO2 cartridge is loaded into the magazine and locked in place with a cap that is tightened with a ¼-inch hex wrench. That is the same system used on many other Umarex replica BB and pellet guns. The CO2 also charges the pistol’s blow-black action. Shooters should be sure to fully deplete the C02 during shooting sessions because Umarex recommends that the pistol not be stored under power, which can damage seals over time.

The pistol’s safety and slide lock accurately mimic those features of the firearm in both function and feel. Unlike the firearm version, a flip of a switch on the right rear of the frame switches the BB pistol from semi- to full auto. The full-sized magazine holds up to 18 BBs. BBs are loaded one at a time into a slot after the spring-powered “follower” is compressed and locked into place open. The process can be a little tricky because the follower tab is quite small. While some nimble-fingered shooters might be able to engage that tab with a fingernail, using the tip of a micro screwdriver or the tip of a ball-point pen works better.

How I Tested the Umarex Beretta M9A3 BB Gun

I tested the Beretta M9A3 BB pistol by shooting hundreds of BBs at targets out to 20 yards, but mostly at ranges of 5 to 10 yards. When focusing on accuracy we slowed our rate of fire, even shooting off a rest from time to time. The blowback does not fully replicate the recoil of the firearm version, but it does create enough of a bump that shooters will have to be muzzle aware to achieve their best results.

The M9A3 BB gun does a great job of achieving its intended purpose as a substitute for the firearm version, and as a fun backyard plinker. The most complicated thing about the pistol is loading the C02 and the BBs, but those tasks will become second nature after the first time or two.

Plenty of blowback C02 pistols suffer when it comes to accuracy. We were pleasantly surprised by the performance of the Beretta M9A3 BB gun. At 5 yards the pistol consistently produced 1- to 1.5-inch groups. At ranges out to 10 yards the groups opened up, as would be expected, but were still in the 3-inch range. The groups tended low using a traditional sight picture, matching a trend that seems to be common with blowback C02 BB pistols. But it was easy enough to compensate by putting the front blade directly on top of the bullseye. An even better approach would be to mount a laser sight. Though it won’t win any 10-meter pistol competitions, this pistol is plenty accurate for casual plinking. I had the most fun shooting not at paper, but at aluminum cans and clay shotgun targets. (No, I didn’t shoot at flying birds; I put them in stationary holders!) There’s just something about that “twang” of hitting a can or seeing an orange clay shatter in its holder.

Many who consider the Beretta M9A3 BB pistol will be those who own the firearm version. They will find that the BB version is an excellent replica. The weight and hand feel are spot on. The plastic grip feels a bit, well, plastically, but that’s not a big deal. The trigger is fair, with a relatively long pre-travel before the sear breaks. Obviously, the recoil characteristics of the C02 version are much milder than with the firearm. Because the BB pistol fits in holsters designed for the firearm it’s a great stand-in for drilling. The end of the barrel is threaded for a faux suppressor, which would be only for replicating the weight and handling of a suppressed firearm, should that be desired.

The magazine release of the BB pistol functions just like the firearm, so reloading drills are possible. (Extra magazines are available.) Care needs to be taken with reloading drills, though. The BB pistol’s magazine is much heavier than the firearm version to account for the lower weight of the pistol’s polymer frame and for the much higher weight of firearm ammunition. Dropping the BB pistol’s magazine on a hard surface could damage it, particularly the mechanism that feeds BBs into the chamber.

I did most of my shooting with the Beretta M9A3 BB gun in semi-auto mode but sometimes switched to full auto. In our testing, the full auto mode worked flawlessly. It’s also a hoot. One day at the range I offered to let a teen-aged shooter give the pistol a try in full auto mode. After emptying the mag (which takes about 1.5 seconds) she had a mile-wide grin. When asked, “Do you want to try it in semi-auto mode now?” she smiled and said, “No! Full auto!”

Accuracy suffers a bit in full auto, but who cares? The only downside of shooting the pistol in what has been called “Happy Mode” is that you’ll spend a lot more time reloading BBs and C02 cartridges than shooting.

Speaking of reloading C02 capsules, a single cartridge will get shooters through three magazines at full power.

What the Umarex Beretta M9A3 BB Gun Does Best

The Beretta M9A3 CO2-powered BB pistol is yet one more of the quality, functional firearm replicas from Umarex. It’s an economical stand-in for firearm owners looking for lots of trigger time without the costs — and, in this age of ammo shortages, hassle — of shooting the firearm version. For example, the cost of running three magazines of ammo through the BB pistol is less than a dollar, most of that for the C02 cartridge. The BB gun is also a fun plinker, not laser accurate but enough for casual target shooting. And while it doesn’t have any bearing on the pistol’s performance, I love the flat dark earth (FDE) color scheme.

What the Umarex Beretta M9A3 BB Gun Does Worst

The biggest downside of the M9A3 BB gun is the modest accuracy. But is that really a downside? No shooters are buying this pistol with the expectation of consistently drilling the X-ring. The accuracy is just fine for the purposes this gun intends to serve. Stocking up on extra magazines, for those wishing to work on reloading drills, can get a bit pricey. But shooting the BB version of the M9A3 is so much less expensive than shooting the firearm, your net cost can justify a few extra magazines; it’s hardly a worrisome issue.

Does the Umarex Beretta M9A3 BB Gun Deliver on its Mission?

The Umarex Beretta M9A3 BB gun checks all the boxes. It’s a functional stand-in for the firearm, so it will help owners of the powder-burning version of this pistol get lots of practice without burning through expensive, sometimes hard-to-find ammo. It’s also just loads of fun for recreational shooting. Whether in semi-auto or full auto, we had a blast with the air gun. Try taking the pistol to the range and letting others give it a try — and then good luck getting it back from them!