You Can Hunt, Fish, and Forage. But Can You Make Your Own Maple Syrup?

If you have access to maple trees, you can make syrup. Here are the tools and know-how you need to get started 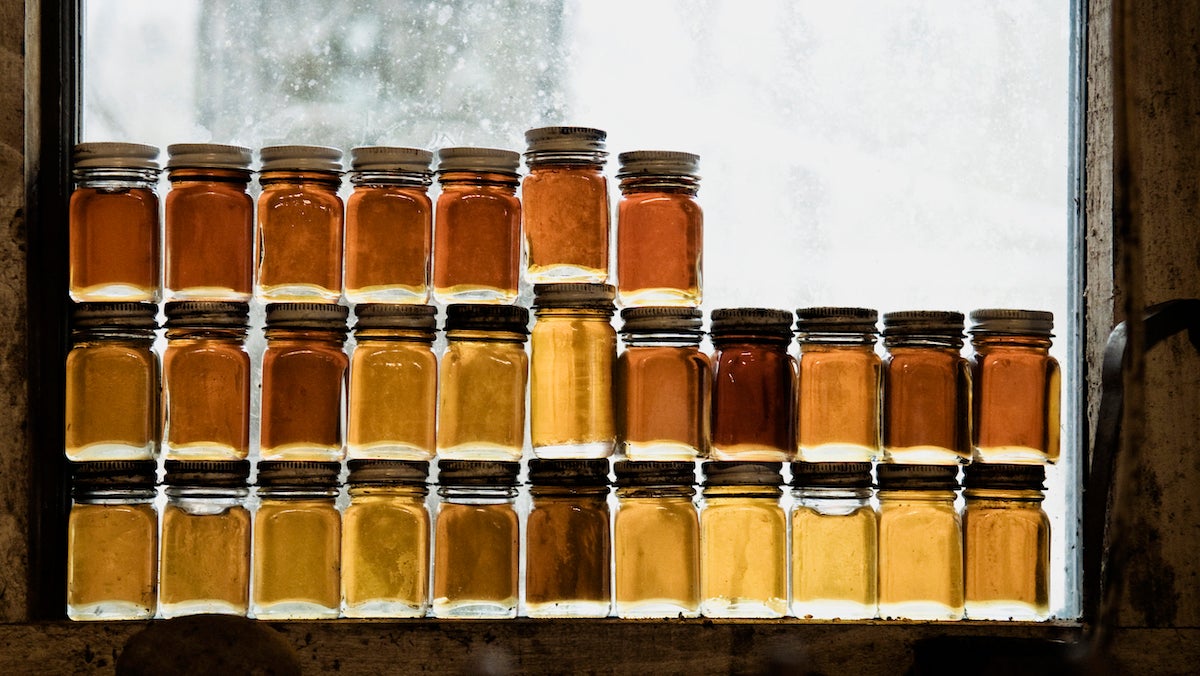 So you fancy yourself a self-sufficient sort? You fill the freezer with wild game and fish. You gather morels in the spring and grow a garden in the summer. Nothing wrong with that but, as the kids would say, do you even boil bruh?

If you live just about anywhere east of the Mississippi and north of the Mason Dixon Line, odds are pretty good you’ve got some maple trees nearby. And if you have maple trees, you have the key ingredient for making maple syrup.

I live in southern Michigan in a village known—literally—as the “Sweetest Little Town in Michigan.” It’s a moniker earned by the abundance of maple syrup production in the area and, of course, the not-so-famous maple syrup festival that happens the last weekend of April each year.

Maple syrup production is a common spring-time “crop” for many farmers, and backwoods sugar shacks (barns or sheds to boil maple sap) are commonplace where I live. Mine is in the pole barn in my backyard. It’s underwhelming in its sophistication and complexity, but I produce enough syrup each spring to last my family all year, and I even have a few quarts left over to hand out to friends and family. Here’s how I do it.

How to Identify The Best Maple Trees For Making Syrup

Obviously, the first ingredient is the most important: Maple trees. Around here, finding some maples to tap is pretty easy. I’ve got a dozen or so around the yard and that’s all I need for my small-time operation.

You’ll hear folks talk of “sugar maples” when referencing the type of tree needed to produce syrup. These are nothing more than hard maples. Soft maples include a number of maple species (red, big leaf, etc.) All varieties of maples produce sap that can be boiled down to make syrup but the sugar content of hard maples is much higher and contains more of the true maple flavor that pure maple syrup is known for.

Identifying maples when their leaves are out is easy—just google an image of a maple leaf. But, in winter when there are no leaves on the tree, it’s still pretty easy. Just look for limbs that have “turkey feet” at the end of them. Maples are one of only four tree species with opposite limb arrangements. Think of it as the three-toed shape of a turkey track.

You don’t need a bunch of equipment to get started and what you do need can be had for well under $100 minus the heat source. You’ll need a drill, taps, a collection bucket or bag to hold the sap as it drains from the tree, a boiling pan, and filters.

For the heat source, a lot of backyard syrup-makers use a turkey fryer, which works well. A turkey fryer can boil a lot of sap in a hurry but can be a bit tough to control due to the depth of the pot. Others make outdoor wood burners using cinder blocks or craft a barrel stove with a cut-out on the top for the boiling pan.

I use a pair of shallow pans that are set on top of the little wood stove I have in my shop for heat. It takes a bit longer to boil than a firing system designed specifically for syrup production, but it does the job just fine and, honestly, sitting in front of the crackling stove as sap boils is something I truly enjoy.

There’s really no magic to making syrup. Boil the sap until enough water has evaporated and you’ve done it. You can literally just grab a spoon and start sipping to know when you’ve reduced the sap to syrup. But a better, more precise method is to use a thermometer and a Brix hydrometer.

Sap becomes syrup when it reaches a certain Brix level—this is the amount of sugar by weight. A designated syrup hydrometer is calibrated to tell you exactly when your sap has hit that Brix. To test, you fill a scaled cylinder with boiling sap and insert the hydrometer. It’ll float, and when the hydrometer floats enough to hit the designated mark, you’ve got syrup. This typically happens around 219 degrees.

The more water content maple sap has, the less heat it will take to come to a boil. It’ll boil at, say, 212 degrees for some time until enough water has evaporated from the sap. As this happens, the sap’s sugar content increases and the temperature needed to bring it to a boil will also increase. The thermometer helps you know when it’s time to start “finishing” which we’ll get into a bit more below.

If you pay a visit to a legit syrup producer, you’ll see special equipment designed for boiling large volumes of sap (think thousands of gallons) to produce hundreds of gallons of syrup in a season that lasts just a couple of weeks. Big producers use large boilers with stainless steel runs laid out in a way that pushes the sap through as it boils. One end of the pan has nearly finished syrup while the other end has raw sap.

These producers also use reverse-osmosis systems to decrease boiling time and exhaust hoods to pull steam off the surface of the sap, further decreasing boiling time. These systems are crazy cool, but they cost thousands of dollars. Even a small hobby setup costs upwards of $2,500.

When is the Best Time To Tap a Maple Tree?

Tapping maple trees is a spring-only affair. All trees produce sap, but maple trees produce sap with sugars that are pretty tasty. When winter finally loses its grip and spring starts to hint at its arrival, it’s time to tap. Around here, that’s late February and early March. I like to tap when daytime temps first hit above 38 degrees for a span of 4 to 5 days in a row.

Maple season is also short. By the end of March, trees will start budding, and it’s done. The sap from budding trees becomes much less sweet and tastes a bit like sour milk. When that happens, the syrup run is over.

How to Tap a Maple Tree

There’s nothing complicated about tapping a tree. You just need to make sure the drill bit you use matches the size of your taps. I use a 5/16” drill bit and a cordless drill

Drill about two inches or so into the tree at a slight upward angle to create a downward-sloping hole. You want the sap to run out of the tree so it’s best to use gravity to your advantage.

Next, take your tap and, ahem, tap it into the tree with a hammer or rubber mallet. Don’t get carried away. You don’t want to crack the tree. The tap just needs to seal the hole. If it doesn’t sap is going to run around the tap and down the side of the tree.

Now hang your collection vessel. I use 1½-inch PVC pipe and plastic bags. This is a super cheap and easy way to gather sap, and I’ve had zero issues with it. I cut a keyhole into the pipe, attach a union at the bottom of the pipe, and then zip-tie the bags onto the pipe. It’s simple and effective.

When I want to collect the sap, I pop the pipe off the tap, dump the sap through the PVC pipe into a 5-gallon bucket and rehang the pipe on the tap.

How to Turn Maple Sap into Maple-Syrup

When the run is in full swing, I’ll get 10-20 gallons of sap a day running about 20 taps. Typically, each tree gets a single tap but large trees can accommodate two. It takes roughly 40 gallons of sap to produce a full gallon of syrup. With my small operation, I produce syrup in small batches. I use Mason jars to store my finished syrup and can get about a quart of syrup from two 5-gallon buckets. This varies a bit depending on the sugar content in the sap, but it’s a solid estimation. It takes about a day for me to boil down 10 gallons of sap.

Sap runs best on sunny days when temps hit about 40 degrees in the afternoon following a cold night with temps below freezing. When this happens, I’ll have a full 5-gallon bucket of sap ready to go and start boiling in the morning. By noon, I’ll have another full bucket of fresh sap and can produce a quart or so for the day.

The key to boiling on a smaller heat source like my wood stove is to use shallow pans. The more surface area you have to work with, the faster the water in the sap can evaporate. The shallower the depth of liquid in the pan, the faster you can get it boiling. Once it starts boiling, I keep the fire stoked and keep the sap at a rolling boil. As water evaporates, I’ll add fresh sap every so often until I pour the full 10 gallons of sap into the pans. This takes about 12 hours or so.

When all 10 gallons have been added and the liquid in the pans is starting to take on that golden color, I start monitoring the temperature with a digital thermometer. When the boiling sap hits 218 degrees, I empty the pans into a saucepan and filter twice with paper filters before heading to the kitchen to finish the syrup on the stovetop.

When the sap is right on the edge of becoming syrup, you can overcook it in a hurry. That’s why I switch to our gas-fired stove in the house. I can control the temperature far better, and I can continue to monitor the temperature non-stop. As soon as it hits 219 degrees, I shut off the heat completely and perform a Brix test. If it needs more boil time, I fire up the stove, bring it to a boil for about 30 seconds and test again. At this stage, very short periods of boiling can make a big difference in the Brix reading so be careful.

How to Finish Your Maple Syrup

Once I get a good read on the hydrometer, I get ready for filtering and bottling. For this, I use a synthetic wool finishing filter. The syrup must be hot to filter properly. I feed it from the stovetop through the filter and into a jar.

Filtering removes niter, a natural byproduct of the boiling process that can give syrup an off taste and make it cloudy. After filtering, I’m left with golden, clear maple syrup. I use a hot bath canning process to seal the jars before storing them away—minus, of course, the hot syrup that immediately goes onto vanilla ice cream after I’m done.