6-Foot Venomous Cobra Is On the Loose in Texas Town

The pet snake slithered free of its cage this week. Just one bite from the West African banded cobra could prove lethal 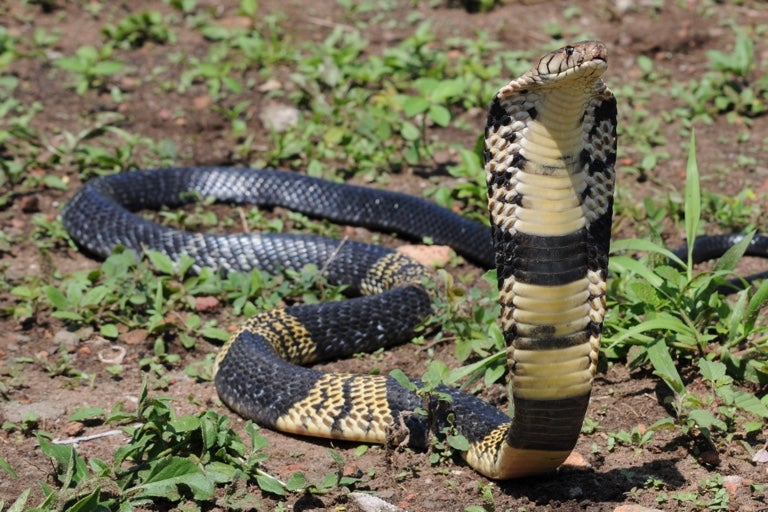 Residents of Grand Prairie, Texas, have been anxiously watching their step this week after a 6-foot West African banded cobra escaped from its cage. Just one bite from the snake could kill a human if not treated promptly.

“I left to go get food for my other animals down the street and I came back, and the cage door was open by an inch. She must have found a way to open it up,” the snake’s owner, who has not been publicly identified, told NBC 5 Dallas-Fort Worth. “I did make a mistake, and I feel very sorry for the community.”

The owner did not disclose where he purchased the snake but did say that there are “venomous shows” where these kinds of snakes could be bought. The owner speculates that the cobra may have gotten inside the walls of his house and died. The morning after the escape, city officials removed two other snakes from the man’s home, including a pit viper, and set traps in the home’s vicinity. Randall Kennedy of Dallas Fort Worth Wildlife Control says that pets like cobras “are supposed to be under double lock and key.” He predicted the snake would only be aggressive it if was stepped on or grabbed, but added that a bite could be disastrous.

“First they’ll kind of stand up and show you their hood and try to warn you to get back,” he told NBC 5 Dallas-Fort Worth. “Unfortunately, if you were bit by [the snake], it’s very devastating. Lots of tissue damage immediately. You can go into a coma. It can attack the nervous system.”

The owner had likely been keeping the snake illegally. The Grand Prairie Police initially said he had a state-issued permit, but the Texas Parks and Wildlife Department later noted that the city forbids possession of venomous snakes. Grand Prairie is a city of 175,396 about 10 miles west of Dallas. Residents who see any type of snake believed to be the venomous cobra should call 911 immediately. As of Thursday, no sightings of the banded cobra had been reported.