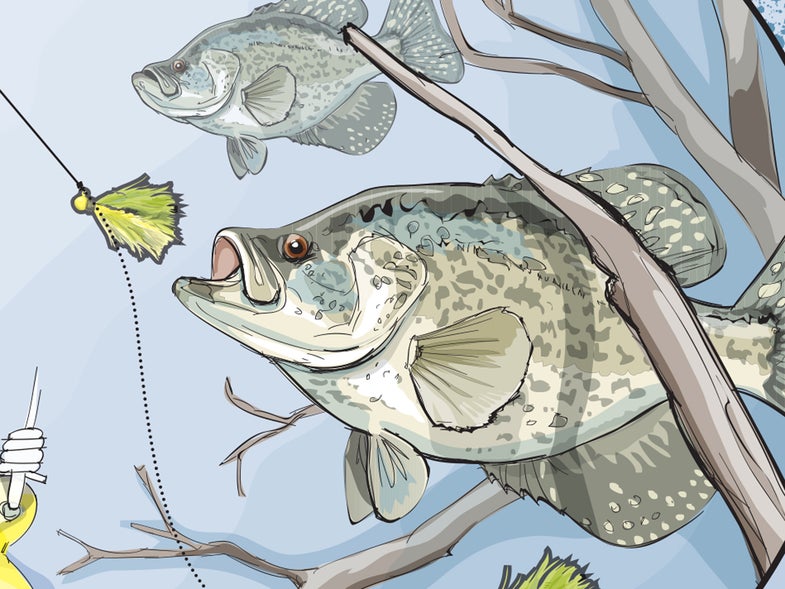 Panfish can be stubborn in early spring, and for that matter, so can synthetic jigs. In cold water, rubber and plastic have a tendency to stiffen, making it difficult to produce the subtle, lifelike wiggle that can make a lock-jawed perch, bluegill, or crappie chew. Natural materials like bucktail and feather, on the other hand, won’t lose their seductive action, even in the most frigid temperatures. Synthetic jigs excel at other times of year, but the pulse of marabou and flare of hair is hard to replicate, and going natural is your best bet for supplying the season’s first big fish fry with loads of fillets. These three tactics will get you hooked up real fast with the real thing.

A 1⁄16-ounce bucktail jig is sparse enough to re-create the translucent profile of a tiny baitfish, such as a fathead, which yellow perch and other panfish dine on often. Unlike a live baitfish, a bucktail jig can be worked slowly in place, and the less a perch has to chase its prey, the more likely it is to attack.

During ice-out, perch flood into the shallows of lakes for their annual mating ritual, but fishing the rocky structure these fish love comes with plenty of snags. To avoid frequent retying, rig your bucktail jig under a fixed float to keep it hovering over the hard stuff and in the strike zone.

There’s no need to do anything more than move your jig at a snail’s pace. Early-spring panfishing is similar to ice fishing, and therefore, keeping a bait in place with minimal lateral movement will score a lot more bites than you’d get with a fast retrieve that forces fish to chase.

[A] Lose Some Weight

Amid thick wood cover, a heavy jig will find a snag faster than it will find a fish. Opt for marabou jigs as light as 1⁄80 ounce. A lighter jig will give you much better control and feeling, allowing you to detect the difference between hitting a branch and getting a bite much faster.

Crappies move to shallow brushpiles to spawn in spring, and the best way to target them is to get a jig directly into the wood. Since you want it to penetrate the cover as deeply as possible, skip the float and tie direct. You’re going to lose a few jigs, but the slabs like the thickest part of the cover.

Marabou feathers flow and pulsate with even the slightest twitch or current, so there’s no need to overwork these jigs. When given a short jerk and a pause, the flaring feathers produce all the action you need to convince a coldwater crappie that it’s looking at a live baitfish.

[A] Slip the Saddle

To target saucer-size bluegills in early spring, rig a saddle-feather jig under a slip-float and hit underwater structure like sunken trees or brushpiles in 5 to 10 feet of water. The slip-​float lets you readjust quickly as you move to different structures at different depths.

One of the benefits of saddle feather is its ability to keep its shape when wet. Because it doesn’t lose its form or profile, you can use just two to four feather tips on a jig and still present big bluegills with a beefy-looking meal on a tiny hook that they won’t miss when they strike.

The bite of a bluegill in cold water can be subtle enough that it will go unnoticed if you’re not paying close attention to your slip-float. Don’t wait until you feel a tug because you probably won’t. As you slowly work the jig, set the hook at the slightest twitch, shimmy, or dip of the float.