The Paris Gun: One of History’s Biggest Cannons 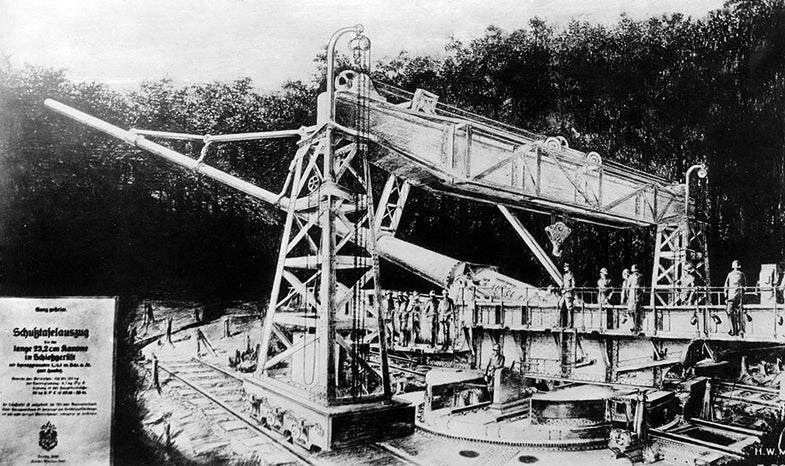 In doing the research for my post on ballistic coefficients, I stumbled into the realm of World War I artillery, and thence to the Paris Gun, a truly furchterrengend und kolossal triumph of teutonic technology that made a brief but glorious appearance near the end of the conflict.

World War I was the first industrial-age war. It was also a war of artillery. Between August 1914 when the fun began, and November 1918 when the Armistice was signed, 1.5 billion shells were fired on the Western front alone. Numerically, that reads 1,500,000,000. Improvements in artillery since the Civil War had been enormous. Guns now used fixed ammunition, and loaded from the breech. There were sophisticated means of aiming, and forward observers with radios. Cannon no longer recoiled—the barrels did, while the carriages remained in place—meaning that artillery pieces no longer had to be re-aimed after each shot. The rates of fire were simply astonishing. The French 75— the Soixante Quinze— which was acknowledged as the best gun of the war, could fire an accurate round every four seconds.

The generals and field marshals who were in charge of the carnage had no idea how to cope, so the armies thrashed and flailed and died in their tens of thousands and hundreds of thousands.

In their desperation, they came up with some odd solutions, and one of the strangest was the German plan, in 1918, to shell Paris from far away. The object was not to destroy the city, but to demoralize the French, who were already pretty demoralized. Working with the armament firm of Krupp, a Dr. Fritz Rausenberger designed a long-range gun that weighed 256 tons, had an 111-foot barrel, and fired a 234-pound projectile at 5,400 fps. That velocity is not a misprint. The maximum range of the gun was 81 miles.

The powder charge required to move a projectile of that weight at that speed is not known. (The guns, and their records, were destroyed by the Germans as the war was ending.) But we do know that the shells, which had two driving bands rather than one, were built in series of 30, and that each shell was a tad larger in diameter than its predecessor to compensate for the ferocious barrel wear, and they had to be fired in numerical order. Krupp made 7 barrels for the gun. The life of each barrel was 65 rounds. After that, it went back to Krupp to be rebored.

Because ordnance of this order was beyond the scope of the Army, the Paris Gun was manned by 80 sailors under the command of a Vice Admiral. These men were trained to operate the huge naval rifles on German battleships. The noise of the Paris Gun was so extreme that, to avoid detection by Allied listening posts, it was surrounded by other, smaller artillery that would start banging away to mask its report when the thing went off.

The first shell was fired at Paris on March 21, 1918, from 75 miles away. The math required to get it on target included the curvature of the Earth’s surface. Between then and August, some 320 to 367 shells dropped on the City of Light. The French at first could not credit that artillery was capable of this, and thought it must be bombs of a stratospheric zeppelin of some sort. For all the Sturm und Drang the shelling was not effective. The shells killed only 250 Parisians and wounded 620. Finally, as the tide of the war went irretrievably against Germany, the gun was hauled back to the Vaterland and chopped up.

The Third Reich experimented with super-long-range artillery in the 1930s, and came up with a much-improved version of the Paris Gun, but by then war was far more mobile, and it was not a practical concept. Rockets were better. Also, they ensured that a young SS Sturmbannfuhrer named Wernher Von Braun would be employed for the next 30 years.