From fishing lures to fruit, Smith makes the most of the things she finds 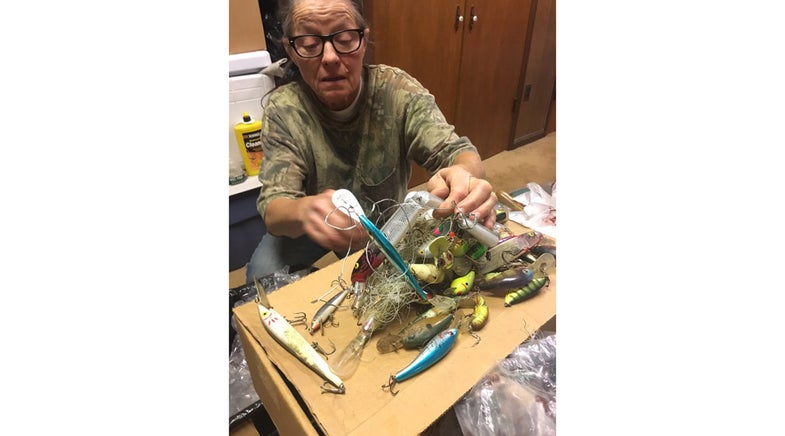 Paula Smith with a haul of salvaged lures. By the author
SHARE

If I had to pick one person in my circle of friends to depend on when the grid goes down, it would be Paula Smith. She and Gordon Leisch share a house in Arlington, Va. “You should see our monthly grocery bill, honey,” she once told me. “Coffee, flour, sugar—that’s about it. And my damn cigarettes, of course.” They eat deer, geese, turkeys, about eight kinds of fish. They grow vegetables. Paula puts individual plastic bags around tomatoes as they ripen to keep the squirrels and chipmunks from ruining them. They trap and release marauding raccoons and the occasional fox. Paula usually has a pet wild rabbit around that she feeds and that has learned it’s safe near the house. She showed one of them to me once, but only after warning me not to look it directly in the eye. “Freaks ’em out,” she said. “And I like my bunny, capiche?” I told her I understood.

Recently, I asked if they had any freezer space I might use temporarily if I got a deer. I’ve been looking for a used freezer but haven’t found one yet. “Nah, ours are full. I got tons of apples this year, still gotta make enough pies to get us through the winter.” There are apple trees in her neighborhood whose owners just never touch the fruit. “They’d rather get theirs at the store,” she says, rolling her eyes. If you’re dumb enough to throw good fruit away, Paula steps in. She also collects and freezes wineberries, blackberries, and serviceberries. She loves pawpaws but insists there’s no way to preserve them. “Best thing is to just eat ’em on the spot, honey. They’re never going to be any better than they are right there.”

She collects, hulls, dries, cracks, and picks black walnuts. If you’ve ever done this, you know the yield is so low per hour of labor that it seems like you’d have to be crazy to do it. Paula does it. “Vanilla ice cream with wineberries and black walnuts? It doesn’t get any better than that,” she says. She even does hickory nuts.

The other day, I took over some old knives I don’t use. I figured they could either use them or sell them at the Civitan flea market where Paula makes a good deal of her income selling deer antlers, old bottles she digs up, and a variety of things she finds in dumpsters. She led me into the Junk Room off the kitchen, where she prepares turkey fans and tans hides. Sitting atop a cardboard box was a tangle of fishing line the size of a bowling ball, which held several dozen lures. “Part of my spring haul,” she said. “I’ve already done most of ’em, but I still gotta get to those.”

She says she can’t remember the last time she and Gordon bought lures. “Why the hell would we?” She nearly shouted. “The damn things come floating down the river in the high water every spring. On slow days in the winter, we sit around replacing the split rings and hooks. Here, wanna see?” She led me over to a little plastic chest with 40 or 50 drawers. In each, sorted by lure type and color, were every kind of lure: Redfins, Bombers, Storms, Rapalas. They had a lifetime’s worth of free lures. She saw the expression of my face. “What’s the big surprise?” she asked, as if angry with me for my ignorance. “It’s all out there if you know where to look.”