The Perfect Storm: Hunting Sea Ducks on the Chesapeake Bay

A rough, open-water sea duck hunt in Chesapeake Bay proves to be an action-packed adventure 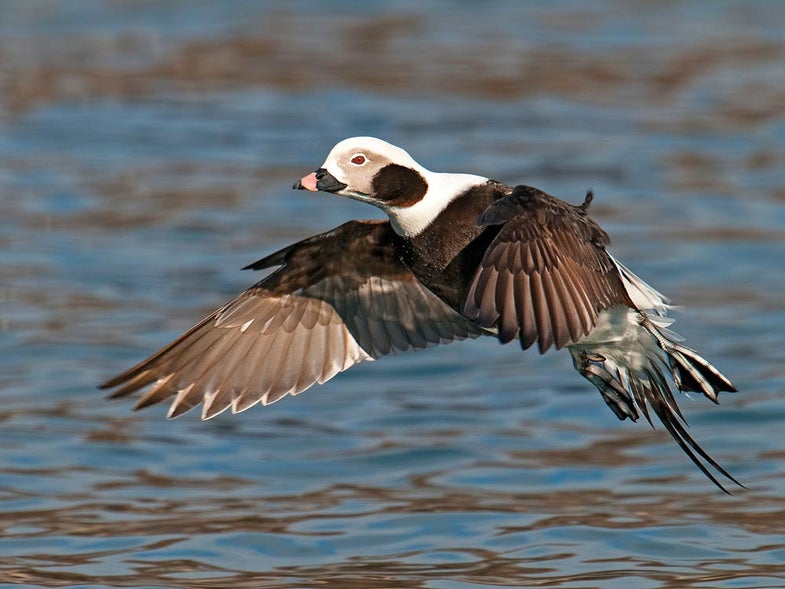 Pretty Bird: A drake long-tailed duck is a trophy for any serious waterfowler.. David Stimac
SHARE

A spray of 35-degree salt­water hits me in the face every three seconds. That’s about the time it takes for Wayne Radcliffe to climb a wave, drop into a trough, and begin the next ascent. He feathers the outboard throttle and quarters the bow as needed, never too much. The guy knows the water, and for the most part, he keeps us dry. But the Chesapeake Bay is choppy today, even for Radcliffe’s big center-console fiberglass boat. “Don’t worry, guys,” he says. “If it was too rough, we wouldn’t be out here.” A rogue wave breaks across the bow and rains upon a pile of scoter decoys. Radcliffe laughs nervously. “It’s almost too rough.”

But this is sea ducking, and getting out here has long been on my bucket list. I love boats, big water, longline decoys, and divers that come in low and fast. The best hunting for species like scoters and long-tailed ducks—the politically correct name for oldsquaws, which is still used by sea duck hunters—takes place a mile or more from shore. Running that far in winter, then settling into a layout boat for the hunt, is dangerous. Yesterday, the wind blew too hard to risk going out, and the forecast is the same for tomorrow. Today is our only chance on a three-day trip, and given how rough the Chesapeake is under a 12-mph north wind, I can see why.

We’re hunting off Maryland’s Eastern Shore, a place so steeped in waterfowling history that some call it the cradle of modern waterfowl hunting. In the early 1900s, the Bay area was alive with market gunning and decoy carving, which is still celebrated here today. Among modern hunters, the Eastern Shore is best known for goose hunting, as Atlantic Flyway Canadas winter here by the thousands. The coastal duck hunting for species like canvasbacks, bluebills, and black ducks can be off the charts, too. Waterfowl hunting is religion around here, but even among the devout followers, relatively few of the area hunters are equipped and willing to target offshore sea ducks.

This far south, on the Atlantic coast, surf scoters and longtails are the primary targets. Hunting regulations for sea ducks are typically set independently of those for other duck species, but because the sport is so specialized, hunting accounts for very little sea duck mortality. The birds are edible—at best. Most sea duck hunters are serious waterfowlers in search of a unique experience and drakes for the wall. When you’re set up properly for these birds in a layout boat, there is nothing else like it in all of duck hunting.

We don’t leave until it’s light enough to see, and the boat ride takes nearly an hour. Our destination is as Radcliffe promised: Thousands of ducks erupt from the open-water chop, buzzing around us as Radcliffe and his buddy loosen the tension straps on his two-person layout boat. “You’re going to shoot mostly oldsquaw, but expect to see some scoters, too,” he says. “They feed on these underwater bars, and this spot has been full of them. You’ll be anchored in about 10 feet of water. We’ll be watching from a couple hundred yards away.”

The layout boat dips and tips nearly 45 degrees with each wave. I’ve done a lot of layout hunting but never in conditions like this. I gingerly step into the rig, knowing there are real problems ahead if I slip. My wife, Michelle, hands me her 870 and climbs into the boat next to me.

“O.K., I’m terrified!” she says, grasping my right hand and nestling down into the boat. Radcliffe sets three dozen decoys on longline rigs 10 yards from the boat.

“You have plenty of shells?” he asks. Ducks are already dipping over the spread. We have four boxes of Black Cloud between us, and I nod yes. “Have fun!” As he motors away, the first flock of oldsquaws is coming our way.

Michelle and I come up shooting—and we don’t cut a feather from the rocking boat on the first flock. More ducks flit by within mere feet of us, but by the time we’re up and on them, they’re 30 yards off and hauling tail. We keep shooting and scratch down a couple of ducks, but nothing about the display is pretty. And we’ve burned through most of a box of shells.

“O.K.,” I say, “we’ve got to chill out.” Michelle is scowling and thumbing shells into her gun with extra force, as if manhandling her 870 a bit will ease her frustration. “If it’s not feet down in the decoys at 15 yards, we’re not shooting. It’s too rough out here to hit much else.”

Another flock of longtails wings overhead, their melodic whistle giving them away just before we see them. We don’t move. A single drake—a brilliant black-and-white bird with a long sprig—banks away from the rest and sets his wings over the decoys. He pays no attention to Michelle as she sits up and deliberately shoulders her gun. “Kill him,” I say. The drake is 2 feet off the water, gliding our way at 15 yards. She fires once, and the duck is dead before it hits the water. This time, she’s smiling as she reloads—and she’s gentler about it, too.

Soon, our limits begin adding up. Radcliffe motors into the spread with a landing net, and scoops up ducks before they drift away. “I knew you’d get the hang of it,” he says. “Every new sea duck hunter starts out shooting at everything in range. That doesn’t work out here. You have to focus on the birds in the decoys, and let the rest go. Take your time, because you’re going to get plenty of chances.”

An hour and a half later, we climb back into the boat, our two limits filled with mostly oldsquaw drakes but punctuated by a hefty drake surf scoter destined for the taxidermist. It’s another wet, arduous ride back to shore, and I can still feel the rolling saltwater under me as I walk across the boat-launch parking lot. I’ve crossed a trip off my waterfowling bucket list—though I’d say my itch to hunt sea ducks has only gotten a little worse.

Read Next: How to Hunt Sea Ducks

When someone suggests to me that camo isn’t appropriate attire, I suggest that they mind their own business. But I do love the retro look of Avery’s new Heritage clothing. The exterior of the Field Jacket is made from 8-​ounce waxed cotton, which protected waterfowlers from the elements back in the day. I’ll still opt for a modern coat for extreme weather—but for hunting and anyplace camo may not be appreciated, this stuff is nice.