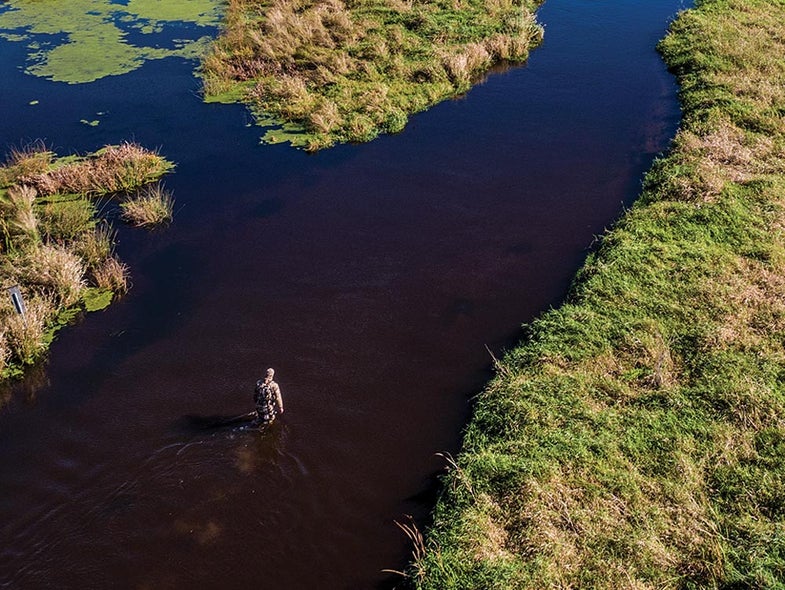 Tony Peterson loves to argue. We left his home state of Minnesota at around 8 p.m. and didn’t reach the public campground in South Dakota, on the banks of the Missouri River, until nearly 2 A.M. We went toe-to-toe the whole way. Politics. Music. Superheroes. Cereal flavors. QDM. There wasn’t a topic we couldn’t disagree on. Somewhere outside of Sioux Falls, when it seemed as though we might have run the well dry, he asked if I believe aliens visit Earth. When I told him no, he acted like I was the first person ever to say so.

That discussion took us through the final stretch. We pitched tents in the dark, and set alarms for only a few hours later. The next day was the eve of South Dakota’s archery deer opener, and we had a lot of work to do.

When I first met Peterson in 2014, he’d been on a four-year tear, arrowing nine bucks averaging over 120 inches. Swiping through the photos on his phone, Peterson, an outdoor writer, raved about the satisfaction of walking onto unfamiliar ground that’s open to anyone, and walking out with a bow buck. Finally, he said, “You should come.”

SO HERE WE WERE, two years later, in his truck at dawn glassing from a network of back roads threading the landscape. Swaths of open prairie, huge rectangles of agriculture, and deep breaks shagged in juniper and oak sprawled away from us in roughly equal parts. Along the roads, at different points, were state Walk-In Area signs—free admission to thousands of acres of whitetail habitat. The only question was where to begin, and Peterson, who had planned the trip months in advance, had our exact starting points pegged on a smartphone app. It was late September, and warm. Amid all the surrounding food and cover, water was the one thing in short supply. By noon we’d hung three stands, all roughly a mile’s hike from the road and overlooking ponds he’d found ahead of time on Google Earth.

RELATED: A 10-Step Guide to Killing a Great Public-Land Buck

At each stop, we threw on packs and grabbed stands and sticks from the truck. Then Peterson would leave me in the dust. He walked 20 steps ahead of me the whole time, scrambling into canyons, circling pond banks to survey tracks, tracing downwind trails to pick the best tree. He didn’t let me hang a single stand, either because I was keeled over and fighting for air or because he didn’t trust me. Probably the latter. By the third set, I was developing a cramp and a blister and a bit of an inferiority complex.

Breaking for lunch, we unpacked the rest of our stuff and organized camp. Peterson has these hunts down to a system. He researches public areas, pores over satellite imagery and harvest data to choose a spot, then nails down the logistics. If he has a secret, it’s simply that he’s harder working and more thorough than anyone you know. He has subsystems for gear, food, even which items belong in each of his hunting pants pockets.

“There’s a little bit of obsessive-compulsive disorder in my family,” he said.

“Really?” I joked. “No one would guess that.” Being the opposite of obsessive, I thought I saw an opening. “So do you describe yourself as detail-oriented or just nuts?”

“Detail-oriented,” he said. “Do you describe yourself as laid-back or a total disaster?”

That afternoon we covered another half dozen miles scouting, and we never hung another stand. We found good sign, but nothing good enough for Peterson. “You know, on all these parcels, there’s only a handful of places where you can set up and have a legitimate shot at taking a buck with a bow in a few days’ time,” he said. “You’ve got to keep going until you find them.”

That night around the campfire we argued about ’80s music and catch-and-release fishing. At one point I mentioned that lake fishing isn’t really my cup of tea.

It seemed like a good time to go to bed.

THE NEXT MORNING—opening morning—Peterson let me hunt from the best stand. From my tree I could shoot to any point along the pond’s outer ring of black mud, churned by deer traffic. But it was a slow sit. When he picked me up at the road and asked how I’d done, I told him I’d only seen one deer, a forkhorn buck.

I laughed. Given Peterson’s reputation as a big-buck killer, I assumed forkies weren’t on his radar.

“Seriously, you couldn’t shoot him?” he asked.

I was surprised, but I guess I shouldn’t have been. In a whitetail culture obsessed with rack size, of course Peterson would take the opposite view. “We’ve got only eight sits each on this hunt,” he said. “Shoot whatever makes you happy.”

It didn’t take long for him to follow his own advice. He picked me up at the same spot after the evening hunt. I should have known something was up when he had almost nothing to say. No arguing. No banter. When we pulled into camp, he just grinned at me until I noticed the 5-point buck lying in the glow of a lantern. He’d hung a stand on a new pond in the afternoon, shot the buck as it came in for a drink, field dressed it, dragged it out a mile, and driven it to camp before picking me up.

That night, we got on the topic of modern deer hunting, where Peterson focuses his most contrarian views. Of course he railed against hit lists and buck shaming and minimum-score fines and canned hunts…all of that is “So gross!” But what bothers him most is that so many of today’s whitetail hunters have adopted a value system based almost solely on inches of antler.

“People think that if they’re not on a managed property with a 150-inch buck behind every bush, then they don’t have good deer hunting,” he said. “Dude, that’s insane.” As a public-land hunter, Peterson has a message: If what you really want out of deer hunting is adventure and fun, and a chance at hard-won success, which is the best kind, then there’s tons of good deer hunting, free to anyone willing to take it. “Just look around us now.”

There was an awkward pause—too much agreeing.

“So what about ghosts?” he said, baiting me.

“I don’t believe in ghosts,” I told him, “but they scare the crap out of me.”

GLASSING DURING MY NEXT FEW SITS, Peterson spotted a nice buck. We moved in at midday and hung a stand over a tiny stream, and the next morning I looked up to see a 130-inch 8-pointer wading away from me through a red carpet of low-growing sumac. Earlier, Peterson had run down a list of deer hunting conventional wisdom he doesn’t buy: That hunters can purposely manipulate herd genetics. That bucks can be reliably aged by sight. That a snort-wheeze always conveys a challenge. “I’ve snort-wheezed in a bunch of early-season bucks, of all sizes,” he said.

Why not? I sent a pht, pht, whoosh toward the buck, and he looked back. I did it again, and he stepped toward me. In total, I snort-wheezed probably 30 times, and all the while, the buck inched closer—as if against his will—until he was 20 yards off. I only needed him to turn, and he did, but behind a lone, upstart juniper that gave him enough cover to reach the creekbottom brush and disappear.

That evening was my last hunt, and we decided to try a new pond, pounded with tracks, at the corner of a cut cornfield. Near dusk, a 140-class 10-pointer stepped into the stubble. Again I snort-wheezed, at least 10 times, before he looked up, flicked his tail, and started closing the distance. When he reached the far edge of the pond, out of bow range, he stopped and stared across the water at the three forkies that had also come to my calls and were now sparring 15 yards in front of me. There were only minutes left of shooting light. I realized that the big buck wasn’t going to come around to my side of the pond and give me a shot.

The field was full of deer now—does feeding, fawns scampering in tow, young bucks testing one another, and dark, heavy forms passing through the distant gloaming. All of this on land open to anyone willing to plan and drive and camp and scout and argue and laugh and generally have a blast. I didn’t have to think about what size rack would make me happy. I shot the closest forkhorn, just before Peterson showed up and helped me drag it out.

RELATED: This Land Was your Land: The Battle over Public Lands

We tagged the buck, loaded it up, and hit the road. Around midnight, we butchered the deer on the truck’s tailgate, under a lamppost, in the motel parking lot. Peterson was slicing part of the hindquarter into fillets, and I told him not to bother because, in my opinion, bottom round doesn’t make very good steaks.

“Dude, you’re totally wrong,” he said, and kept on slicing.