Handguns, knives, and more for hunters and anyone getting ready for the worst of times 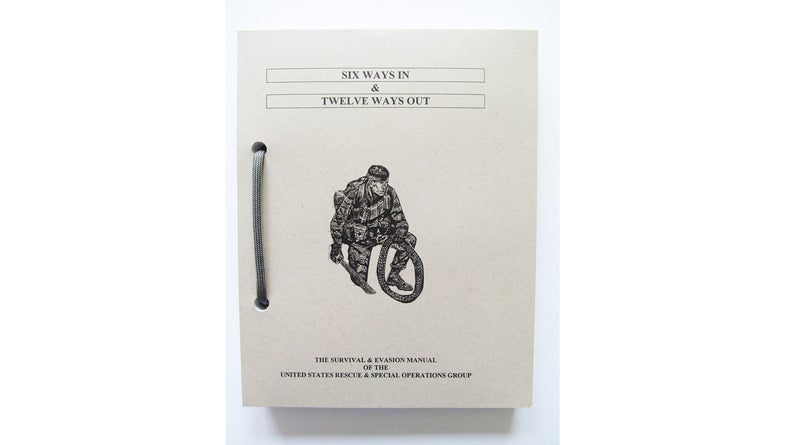 As the good ol’ US of A teeters on the Cusp of Chaos, prior to plunging into the Abyss of Anarchy, I turn again to my prepper publications and, in particular, to a mysterious looseleaf book called Six Ways in & Twelve Ways Out:* The Survival & Evasion Manual of the United States Rescue & Special Operations Group.

It’s a crudely assembled looseleaf book of 184 pages that are printed on green paper. The illustrations are crude. The text is full of errors. Mine is the second edition, and is copyrighted 2000 to one George Jasper, who lists himself as a member of the 3rd Battalion of the 75th Ranger Regiment during the 1980s.

The USRSOG is not part of the government. As nearly as I can tell from their website (which is copyrighted 2007), it’s a private company whose function is rescues and survival training, and which employs former military personnel.

Six Ways In is theoretically available from this organization for $15. However, since all the information you see on the web varies between wildly unreliable and completely untrustworthy, who knows? What I do know is that Amazon has one copy for sale, and that’s going for $75, so someone must want the book pretty badly, and everyone who has one and talks about it on prepper websites raves about it.

Mr. Jasper preaches long-term survival in the wilderness, and touches on a variety of subjects, in detail, and with a great deal of common sense. He does not worship expensive equipment (this is one of the book’s few faults), but he’s quite specific about what works and what doesn’t.

In the much-overworked matter of survival knives, he says that any good knife will do, but that big knives are much better than small knives, and that no knife is complete without a Leatherman Super Tool and a sharpening stone to keep it company. I’ll buy that.

In the matter of guns, he is quite specific. Jasper claims that the only firearm to pack when evading the Reaper is a .22 LR target-style semi-auto pistol with a red-dot sight and a long barrel. Either get one in stainless, or get a blued version and send it out for a third-generation rustproof refinish. He specifically mentions the Smith & Wesson Model 41, and would, if the book had been written today, recommend the Ruger Mark IV Hunter Stainless as well.

Sight in the iron sights first, and then mount the red dot. That way, if the batteries quit, all you do is take the thing off and you’re still good to go.

If you plan to head for the hills, as opposed to fortifying the old homestead, it’s hard to argue with him. A handgun, even a target pistol with a red dot on board, is much lighter and more compact than any rifle. The .22 LR hollow-point is plenty lethal. The noise level is comparatively low.

Handguns such as he describes are instruments of extreme precision. I’ve seen people who are really good with them hit a life-size grouse target five times out of five, at 50 yards, standing, with a one-hand hold and iron sights, and do it over and over. Try it some time.

And, consider this: 50 rounds of .308 ammo weighs 3 pounds even; 50 rounds of .223 scales 1½ pounds; 500 rounds of .22 LR adds 3¼ pounds to your load. That’s a lot of shooting. If you’re haunted by the image of the protagonist in The Road roaming a post-apocalyptic world with one round for his revolver, here’s your antidote.

If you can find a copy of Six Ways In at a reasonable price, I recommend it highly. Even if you’re not a prepper, much of what he talks about is very useful to hunters. The information, even if it doesn’t save your life, will save you a lot of misery until the Reaper swings his scythe.

And on that note, as I do every year at this time, I would like to quote Tiny Tim: “God help us. God help us every one.”

*I have no idea what the title means. Can anyone explain it?