Photogaph courtesy of USFWS Mountain-Prairie/Flickr A tree that has been shredded by antlers is the most obvious sign that a... 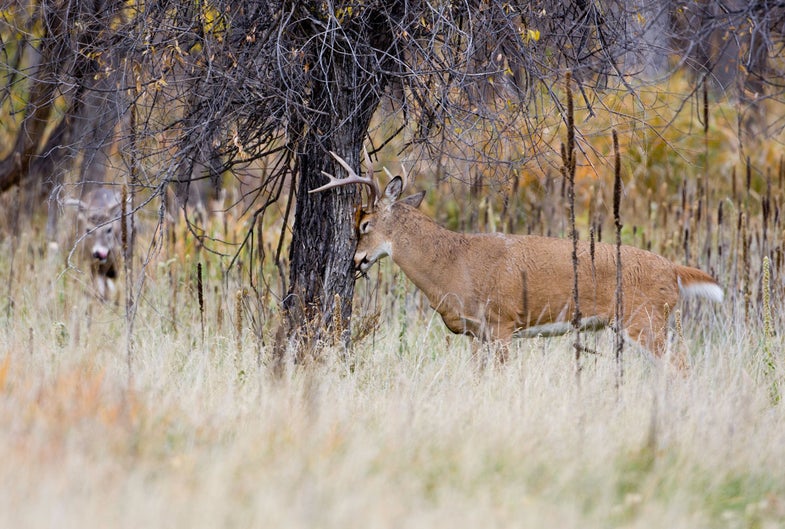 A tree that has been shredded by antlers is the most obvious sign that a buck has been in an area. But with some knowledge of deer behavior and a little scouting, a rub can tell you a lot more. You can determine when the rub was made, what the deer was doing when he made it, and the buck’s probable age.

Mature bucks make two distinct types of rubs—early-season and breeding—that correspond to late-summer feeding patterns and to the rut. To unravel a buck’s routine as he progresses through this period, you must understand the difference between the two types.

Bucks make early-season rubs for several reasons: Scraping antlers on trees builds up neck and shoulder muscles. It allows bucks to release aggression caused by rising testosterone levels. And the markings designate a buck’s territory, both visually and by scent deposited from the forehead glands. Other bucks may rub the same tree, adding their signature smells.

Mature bucks make their initial rubs in September and early October on stout trees, usually 2 to 4 inches in diameter. These mark a buck’s primary home range. Clusters and lines of them usually indicate that they were created either as the buck traveled from food sources to thick bedding cover at dawn or on his way back to feed in the late afternoon. Hunting these spots may be your best chance to take a mature animal before the rut.

Start scouting in September and October. Since the most dominant bucks make the first rubs, getting out early will put you onto the oldest deer in the area. Keep the locations of the rubs in a notebook or on a topo map and follow any trails to pinpoint likely bedding territory and early-season foods like alfalfa, clover fields, oak flats, or abandoned orchards. After you’ve found some rubs near the food sources, backtrack and look for potential stand sites such as funnels, ditches, benches, and saddles where the deer rubbed more trees as he approached his bedding cover. Rubs that face the food source probably were made in the morning as the buck returned to his bed; ones on the opposite side most likely were from some time in the afternoon.

Once the rut begins, you can forget the rubs you found during the early season. The change starts toward the end of October when bucks’ testosterone levels build up and does begin to release estrous scents. At this point, bucks will move out of their home ranges and into doe territory where they continue to scrape trees and travel widely, searching for ready mates.

Bucks make breeding rubs primarily to display their prowess, but these visual and olfactory signposts often psychologically and hormonally suppress small bucks to the point where their testosterone levels stay so low that they do not attempt to mate.

Lush areas with gentle terrain near food sources can be good places to look for breeding rubs, particularly in spots with pockets of doe bedding cover like cedar, pine groves, honeysuckle, or sapling thickets.

Even though it might seem as if rubs at this time of year are too random to be of any help, they can be a quick ticket to success in November and December, and even into January in areas where the mating season extends late. The trick rests in finding the rubs that have been made within the last day or two, since they were left by the most fired-up bucks on the scent of does that are going into estrus. But only a brief window of opportunity exists for catching that buck before he moves on. Fresh sap and very ragged bark will help you judge a rub’s age. Once you find hot sign, the strategy is simple: Set up quickly downwind and watch the area for as many hours as you can.

Any buck might rub a tree of any size. I’ve seen 5-year-old bucks demolish finger-size saplings and yearlings rub 4-inch trunks. That said, it’s true that you can often guess a buck’s size by the proportions of the tree he rubs. These are the general rules:

•Small saplings and thick-stemmed brush, such as autumn olives, attract all sizes of bucks that like to fight with the flexible brush and thrash it to a pulp.

•One- to 2-inch-diameter trees attract yearlings and 2-year-olds.

•The rare rubs you may find on 4- to 8-inch trunks are typically the hallmark of mature bucks, 5 to 7 years old. —G.A.