Having grudgingly admitted that cheap red dots can kill turkeys, I turn my attention to a decidedly non-cheap red dot,... 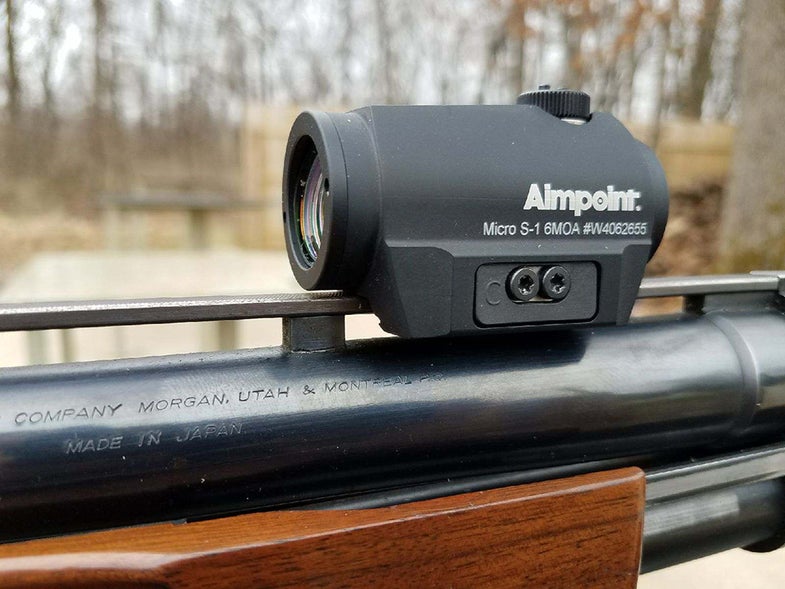 Having grudgingly admitted that cheap red dots can kill turkeys, I turn my attention to a decidedly non-cheap red dot, and one that is, as far as I know, unique among dot sights.

Aimpoint’s new Micro S-1 mounts directly onto the rib of a shotgun, making it possible to put red dots onto guns that previously couldn’t wear red dots, like the Browning BPS in this picture. What’s more, the Aimpoint people spent a lot of time and engineering to shave as much thickness as possible off the bottom of the sight. The low profile design minimizes one of the biggest drawbacks of red dots for shotguns: they stand up high, often too high for comfortable use with a shotgun stock.

In contrast, the Micro S-1, once mounted on a shotgun rib, sits as close to the bore as a red dot can. Mount the gun normally (well, almost normally, your head has to be adjusted a tad) and the dot is right there. It’s wondrous. The sight comes with a set of mounts that enable it to fit onto most shotgun ribs (Remington is one glaring omission that I am told will be remedied sometime soon). The mounting hardware isn’t hard at all, it’s made of carbon fiber, allowing you to clamp the sight tightly onto the gun without marring the rib.

In all other ways, the Micro S-1 is similar to the H-1 Micro: it’s tiny, weighing about 3 ½ ounces. It offers 12 levels of brightness and runs for 50,000 hours continuously on a single CR 2032. Unless you are Rip Van Winkle, you are not going to be able to leave this on long enough and forget about it to run it out of batteries.

This sight has a 6MOA dot, making it more suitable for shotgunning than smaller 2 and 4 MOA dots of the other Micros. The Aimpoint literature suggests this would be a good sight for sporting clays, to which I say “phooey.” You may disagree, but I have tried clay shooting with dot sights and it’s, well, it can be done, sort of, but why? On the other hand, the Micro S-1 is close to perfect for turning a vent ribbed gun into a turkey/coyote/deer-with-buckshot/squirrel gun. If your shot pattern needs to be aimed precisely, this is a sight to look at. It will sell for somewhere around $700.