Meet the Riverkeeper: How One Outdoorsman and Conservationist is Working to Protect Alabama’s Black Warrior River 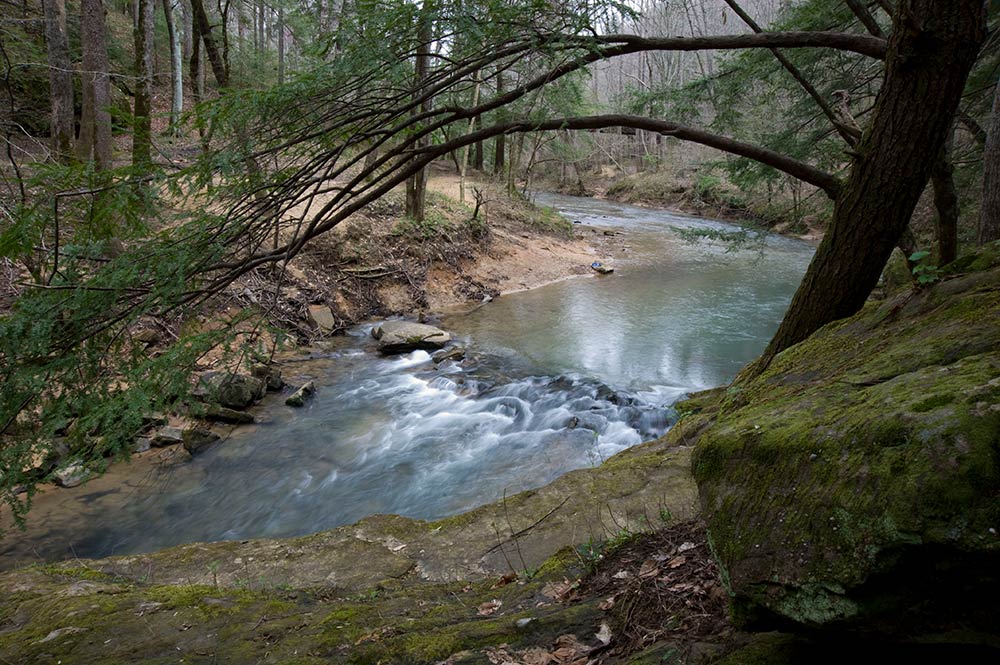 “A great workday for me,” Nelson Brooke tells me, “is being out on the river or on one of the tributaries—the Locust Fork, the Mulberry, the Hurricane—and meeting the locals and finding out what the major issues are on their part of the water. There’s lots of days in the office, too, running communications, gathering and providing evidence on legal cases, educating, but my best days are out in the field.”

Brooke is the Black Warrior Riverkeeper, and a native Alabaman, born and raised in Birmingham. He is an Eagle Scout and has fished and hunted central Alabama all of his life. Now 40 years old, he has been the Riverkeeper here since 2004, patrolling the watershed, collecting data, watching for trouble, making his living guarding his home country. He and his wife are expecting their second child. “I expect my children to have a clean and healthy environment to hunt and fish in!” he said. The Black Warrior River is a 178-mile tributary of the Tombigbee River, which flows from the Alabama uplands to the flat coastal plain, a passage between two very different worlds. The river is heavily dammed and has a history of being treated poorly by mankind, but it is cleaner than it once was, and if Brooke has anything to do with it, it will be cleaner in the future than it is now.

Brooke is one of over 200 Riverkeepers in the United States, and part of the Waterkeeper Alliance that began as the Hudson River Fishermen’s Association in 1966, a blue-collar group of New York state commercial and recreational fishermen who fought back (and mostly won) against the industries and cities that were using their river as a toxic waste dump and sewer. (You can read a good history of the organization here

The Hudson River Fishermen’s Association bought a patrol boat with the bounties they claimed for identifying polluters under an obscure set of laws—this was six years before the Clean Water Act was passed—called the Harbors Act of 1888 and the Refuse Act of 1899. They began patrolling the river, identifying more of the worst polluters. The first Riverkeeper, and the seed of what would become the Waterkeeper Alliance, was born. Fifty-two years later, the Waterkeeper Alliance is the largest and fastest-growing nonprofit water advocacy group in the world, with a simple stated mission: “Our goal is drinkable, fishable, swimmable water everywhere.”

Brooke and I met by telephone some years ago when I was researching a story on what we could expect in Alabama as the Clean Water Act was scaled back by Supreme Court decisions and an increasingly hostile (to clean water regulations) Republican Congress and state legislatures. He was on the front lines, and he was living in a place that I knew pretty well.

When I was in college at the University of Alabama in Tuscaloosa, my best friend had a small flat-bottom boat and outboard, and he and I ran a trotline up what we thought was the edge of the main channel of the Black Warrior River, just downstream from the bridge on Lurleen B. Wallace Boulevard. We’d spend an enjoyable hour or so throwing poppers along the bank for brim, and keep a few to make cutbaits to put on the trotline. We caught a few fish most days—blue cats up to five pounds or so, a few lean channel cats, a couple of buffalo. We mostly let them go or gave them away to people fishing along the banks; we never dared eat them ourselves, so fearsome was the reputation of the pollution in that river. This was the 1980s, and Alabama had—it still does—a reputation as a place where the polluters held the power, and where the fruits of their power could readily be seen. The beautiful Hurricane Creek, a tributary of the Black Warrior, where we went to hike and swim and rock climb, had almost no fish in it, the victim of acid drainage from almost a century of coal mining in its headwaters. We were young and didn’t yet know why there were no fish, no life in that creek. We didn’t really expect it to ever be fixed, because we didn’t know what was possible.

Nowadays, Brooke told me, Hurricane Creek has its own Riverkeeper, and it is very much on the comeback. “Back when you were on it, Hurricane Creek was almost lifeless from runoff from the coal mines,” he said. “Before that, there was a chemical plant right where it pours into the Black Warrior that used to dump so much waste that the river turned yellow.” But after decades of restoration and monitoring work, Brooke says, Hurricane Creek began to wake up. “A whole lot of fish, redhorse, all kinds of fish, are in there now. It is a validation of years of work, and we’re still at it, trying to address the municipal sewage issues there, trying to keep the developers from dumping sediment into it. Getting the creek back is really about holding people accountable for what they are doing to it.”

It is hard to hold people accountable when the laws are not there to back you up, or when you have agencies that are in charge of enforcing existing clean water laws, but simply do not do so. “We’re still paying for all the damage that was done in this watershed in the days before the Clean Water Act,” he said, “and we still have people who are willing to make their profits by taking that clean water and all that goes with it, from all of us. At Riverkeeper, we don’t mind being adversarial and confronting people like that. We see it all the time, people making impressive profits by cutting corners and putting the cost of their operations on everybody else. Those kinds of people don’t like us. We make them uncomfortable.”

Brooke says that Black Warrior Riverkeeper would not exist if state agencies were diligently enforcing even the most basic state and federal clean water laws. “Right now? We actually have state agencies that go to bat with the polluters. Our number-one challenge is a lack of enforcement by state authorities, and a lack of the EPA holding them accountable.”

Recent events and criminal trials in Alabama have not been reassuring to those who look to the states, rather than the federal government, to protect water, private property values, and other resources. (Although it could be said that such faith would be ill-placed at the federal level, as well. Trey Glenn, Alabama’s former Director of Environmental Management, left the agency in 2009 amid accusations of ethics violations. A state grand jury investigation led to no charges being filed. Glenn then worked as a consultant to the same industries he had been charged with regulating, until being appointed by the Trump administration to be the top EPA official in the Southeast. In November of 2018, Glenn was arrested on federal charges, as part of a wide-ranging scandal that has so far led to felony convictions for a prominent Birmingham lawyer, a Drummond Company executive, and a state legislator.)

“We have the worst-funded state environmental agency in the U.S.,” Brooke told me. “If you want to present the state’s rights argument, that the federal government has no business enforcing water regulations in the states, then you are making the argument for allowing polluters to dump at will in our rivers, lakes, and creeks.”

The Black Warrior River is a perfect test case for what works and what does not, because of where it and its tributaries lie in the state. “We have coalmining and chicken CAFO’s along the Mulberry Fork,” Nelson said. “The Locust Fork has those issues, too. Jefferson, Walker, and Tuscaloosa counties all have coalmining, CAFOs, coal-fired power plants with coal-ash disposal issues and clearcutting that affects the river.” Brooke adds that basically, “we are surrounded—highways, rail hubs, barge navigation, an industrial city, and sprawling suburbs.” If we want to keep the river clean, “you’d need stringent permits that are strictly enforced. You could have all the industry and development and have the clean environment, too, but you’d need something more than what we have.”

The Sipsey Fork of the Black Warrior is the shining light, and what Brooke calls “the gem” of the watershed. It is the only nationally-declared Wild and Scenic River in the state. The headwaters of the Sipsey Fork are protected within the Bankhead National Forest, in one of Alabama’s first designated wilderness areas (one of only three in the state, and the largest), and create Smith Lake, one of the South’s best striped and spotted bass fisheries. The tailwater below Smith Dam is one of the few places in Alabama where fishermen can catch rainbow trout.

Whether the entire Black Warrior River system can ever be that healthy is open to question, and the answer is entirely up to us. There is a tremendous amount at stake, as Brooke, with a new baby on the way, is quick to point out. “You look at the Locust Fork, coming over the Fall Line,” Brooke said, “over three hundred million years old, and one of the most beautiful rivers anywhere. Then you get downstream of Tuscaloosa in that river bottom forest, thousands of acres of wetlands complexes. I’ve been to Northeast Australia, to Alaska, and to the Amazon, to see those rain forests, and what we have right here in the Black Warrior floodplains is as wild and bountiful as any of those.”

In the meantime, Brooke says, he’ll keep patrolling, and keep speaking for, the river and its tributaries. And keep fishing and hunting this part of the state. “We hunt deer and turkey, of course, and fish spotted bass, large and smallmouths, redeyes,” he says. “But I work with a lot of biologists—it is one of the perks of the job—and I’ve gotten fascinated by these Gulf walleye they are studying. They are a distinct species and they serve as the obligate hosts for a kind of freshwater mussel—the mussells trick the walleyes into transporting them around the watershed to the habitat where it can live best. This whole idea is mind-blowing. You have to see it—the mimicry these things use is incredible.”

The Gulf walleye is a unique, and uniquely imperiled, gamefish—one that inhabits the Mobile River and its waters far to the south of Brooke’s Black Warrior River bailiwick. But as any Riverkeeper will tell you, it all makes sense when you get downstream: Hurricane Creek, the Locust Fork, the Sipsey Fork, the struggling little Mulberry Fork, all flow together to create the mighty Black Warrior, which joins the even mightier Tombigbee River at Demopolis, Alabama, and the Tombigbee pours into the Mobile and Tensaw Rivers, one of the great riverine deltas and fish and wildlife nurseries of our planet. The Mobile River, and the Gulf walleyes still living there, depend on clean water upstream—and clean water upstream, and healthy fish downstream, is the Riverkeeper’s main business.