Greetings from Las Vegas, where the truly grotesque is at your beck and call, for a fee, of course. If... 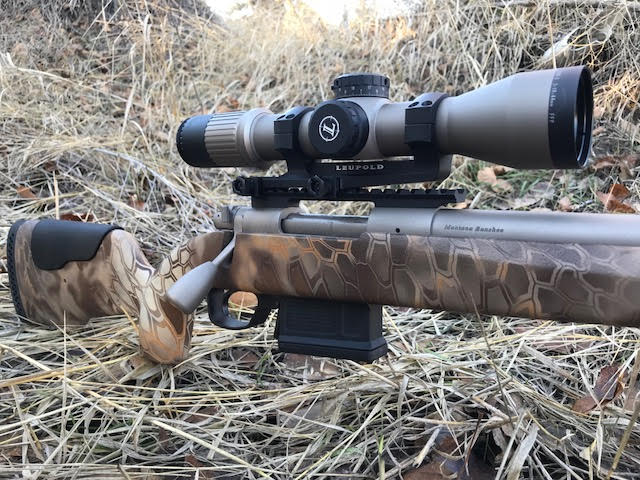 Greetings from Las Vegas, where the truly grotesque is at your beck and call, for a fee, of course.

If there is any doubt about which way the shooting wind is blowing, consider that in the SHOT Directory, there are 17 courses listed for gun dealers in general (What to do when your ATF auditor says you are a lying s.o.b.), 12 for retailers and range operators (Ditto), 17 for Law Enforcement, and 0 for hunting. At least none that I can find.

There are, however, still some real hunting rifles—and some very, very good ones at that. The tactical influence is making itself felt here, too. Stocks now adjust for length of pull and comb height. Muzzles are threaded for cans and recoil reducers and flash hiders. But it’s all for the good, say I. If your stock really fits and you don’t destroy your hearing, great.

What follows are my picks for the best new hunting and hybrid (designed both for the field and the competition range) rifles of the 2018 SHOT Show. It’s a short list, because I happen to think that “best” means something.

This is the Barrett that brought us the first practical .50-caliber rifle, the legendary, near-mythical M82, and before we get to the newest Barrett, which is a very light bolt-action sporter, I have to tell you a Ronnie Barrett story. In 2002, the head of the California Highway Patrol wrote Barrett asking for a price on a batch of M82s with which to do God knows what. Problem was that in California, a civilian could not buy a .50, so Mr. Barrett wrote back to the official, stating that if a law-abiding responsible citizen of that state could not own a .50, neither could the state police. I think that is terrific.

Anyway, the Fieldcraft is a conventional bolt-action with a carbon-fiber stock, a fluted bolt, and lovely, graceful lines. It comes in barrel lengths from 18 to 24 inches, and weighs from 5 to 5 ¾ pounds, depending on caliber. It is a startlingly light gun. Calibers run from .22/250 to .30/06, and you can have the muzzle plain or threaded. All told, the Fieldcraft fairly reeks of class; you can tell when the people who built a rifle are serious, and Barrett is. For so fine a gun, the price is very, very reasonable; depending on options, it hovers in the $1,700-$1,800 range. Barrett

Here is another surprise. If you’re familiar with classic Mausers with controlled-feed actions, you’re aware that they sell for $7,000 to $14,000, which may be why you don’t own a new Mauser. The M18 is designed, so their marketing copy says, to put Mauser back in the hands of the people, which sounds vaguely Marxist, but refers merely to rifles.

Unlike the controlled-feed M98, the M18 is about as modern a turnbolt action as I know of. It’s a pushfeed that employs a detachable box magazine, has a synthetic stock with soft inlays, and comes in seven calibers from 6.5 Creedmoor to .300 Win Mag. Weight, I would guess, is around 7 pounds without scope. I shot one, and it’s an easy gun to hit with. The price is $699.99, and without a doubt this is the best finished and fitted $700 rifle I’ve laid eyes on. Because it’s inexpensive doesn’t mean it’s cheap. You can buy a $400 or a $500 centerfire and you’ll save $200, but it won’t be anything like this one. Mauser

As a brand, I think Bergara is probably the best-shooting rifle around today. I’ve shot a bunch, and have yet to see one that was not outstanding. Made in Georgia, the HMR Pro is a dual-purpose (Hunting and Match) rifle with a No. 5 contour barrel, a new trigger that’s made by Trigger Tech, which is sensational, and an adjustable tactical stock with a full-length mini-chassis. The HMR Pro comes in .223, .22/250, 6mm, 6.5mm Creedmoor, and .308. It has a threaded muzzle and is based on the Bergara Premier action. Weight runs from 9.2 pounds to 9.6 pounds, depending on caliber.

The rifle I groped at Range Day in the video above came with a test target in which resided a three-shot group that measures .219. (Bergara tests all these rifles for accuracy, and puts the targets in the box with them.) This is very, very fancy shooting. Whoever does their testing can really lay ’em in there. If you can shoot this well you are a hell of a shot. The price, at $1,715, is a bargain. Bergara

This rifle is so new that prior to the SHOT show, no one had seen it except myself and the folks who built it. The Banshee is a heavy tactical/hunting rifle with Indescribable Cool. Everything is color-coordinated from the camo stock to the metalwork, which I take to be Cera-Koted, to the special Leupold Mk 6 3X-18X scope. It comes standard with a Surefire Flatsbrake Suppressor Adapter, a Spartan Carbon Fiber bipold, Kryptek Banshee camo pattern, Timney trigger, Magpul detachable box magazine, #6 contour Montana barrel, 1-8 twist, and a total weight of just under 13 pounds.

The Banshee will be a limited production gun. Only 50 will be made at first, and if it catches on, the rifle will be homologated, which is a fancy word that performance-car builders use to mean standardized and put into regular production. The MSRP is around $6,000. Yeah, I know, but think of the envy factor. Montana Rifle Company

There’s no shortage of chassis-stocked rifles on the market, and just about all of them look like they’ll really shoot. All of them do go bang, but only some produce small groups. The Savage 10/110 BA Stealth, which came out a couple of years ago, is one of the latter. And the new Stealth Evolution is a much-improved version of that original. The ergonomics have been upgraded with the addition of a Fab Defense Buttstock. The monolithic aluminum chassis is both lighter and much stronger than the original, and is anodized a very cool subdued gold color. Calibers range from .223 to .338 Lapua, and barrel lengths change accordingly from 20 inches to 26 inches. A muzzle brake is standard, as is the Accu-Trigger, 5R rifling, and a factory-blueprinted action. Price, depending on caliber, ranges from $1,799 to $2,149. Savage Arms