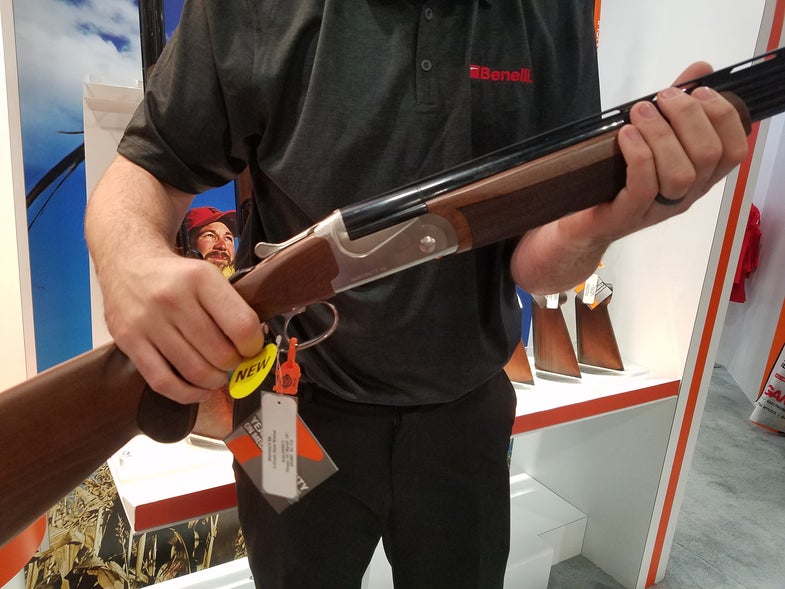 My SHOT Show ended late last Thursday afternoon the Gerber booth. If Hunter S. Thompson were alive and writing Fear and Loathing at the SHOT Show, he’d have included this scene of surpassingly weird all-American excess. Former Green Beret and current UFC fighter Tim Kennedy (whom Thompson would have called “half-crazed” but I would call “up for anything”) bashed his right elbow to a bloody mess attempting to break the Guinness World Record for cans of beer smashed flat in one minute.

In front of a cheering crowd fueled by (unsmashed) free beer, suds sprayed as Kennedy worked his way around a custom-built table lined with beer cans end to end. He fell short of the record of 77, then commenced pounding surviving cans with a Gerber Ding Dong sledgehammer/breaching tool after time expired, dousing the Guinness judge who was carefully measuring each elbowed can to see if it had been flattened to 3 centimeters or less. As red, white, and blue confetti fell from the ceiling, Kennedy took a microphone and yelled “F— Isis! God bless America!” Unlike Hunter Thompson and Dr. Gonzo in the hotel lobby covered with drug-induced visions of blood, videographer Mike Shea and I did not need golf shoes to get traction on the beer-covered floor. The Maid of the Mist–style ponchos the Gerber people handed out to those of us in the front row kept us and Shea’s camera dry. You can see his video below.

Amidst the tactical gear—see Ding Dong breaching tool above—that continues to spread across the SHOT floor like some invasive species, there were still traditional hunting guns and ammunition to be found. In fact, it was heartening to find two new bismuth loads that can keep old guns in the field. Kent has both lowered the price of bismuth and found a supplier that makes large BB, No. 2, and No. 3 pellets, and they are packing it in 25-round boxes for 12-, 16-, 20- and 28-gauges, while Winchester has a 3-inch 12-gauge bismuth Long Beard–style load of No. 5 shot for ducks and turkeys. Also hitting a traditional note, Federal and Rio are both launching (relaunching in Federal’s case) paper loads. Kent has a 2½-inch, ¾-ounce 12-gauge shell that would be perfect for old short-chamber doubles and as practice loads for the recoil averse.

There was a Franchi 16-gauge o/u, too, which I included in my SHOT Show gallery, which now raises the number of currently produced 16s I’m aware of to six: Browning’s Sweet 16 A5, the 16-gauge Citori Lightning, the Franchi, the Barrett Beltrami o/u, the Dickinson Plantation Grade double, and the Perazzi Lusso 16 I swooned over.

So what’s it mean? Is there a trend toward traditional guns and a 16-gauge revival? It’d be nice to think so, but I had the following very depressing discussion with a friend at the show. He was back from a hunt at a high-end waterfowl lodge in western Nebraska, where he said the outfitter told him one of their biggest challenges was adapting to an aging clientele. “A lot of their hunters can’t climb down into a goose pit anymore,” he said.

So, my take on the uptick in traditional guns and ammo is simple: The industry wants to sell them to Baby Boomers before we die. It’s the generation that has the interest, and the money to spend, but we are aging out of hunting. As my friend also told me, “For every 100 hunters that leave the sport, we’re replacing them with 67.”

Long story short, we should gather our 16-gauge rosebuds while we may. Our kids may trade them in for black guns and breaching sledgehammers, but by then we won’t care.