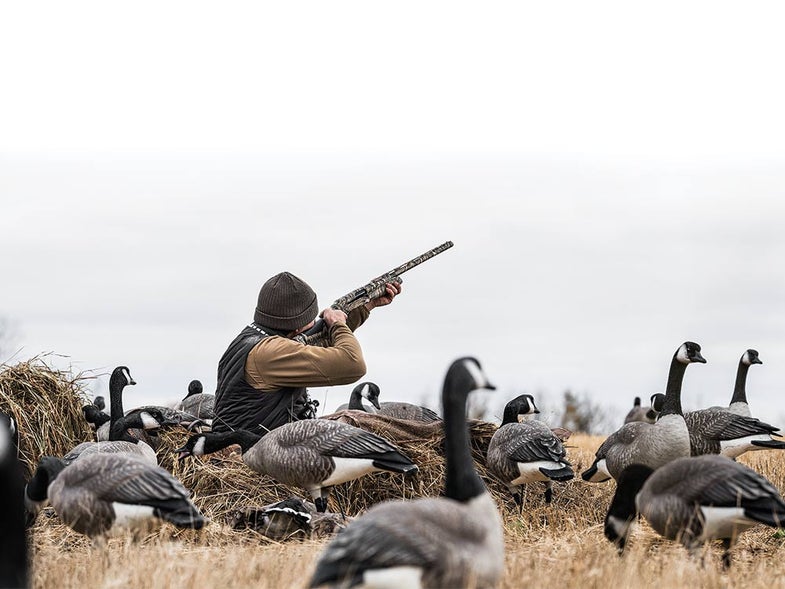 Aftermarket choke tubes look cool, but will they help you bag more waterfowl? Choke makers tout better patterns from their wares, and some claim shorter shot strings and lower recoil, too. Skeptics say a flush factory Modified is all you need. Recently, Federal’s shotshell engineers helped me scientifically test four tubes of identical internal diameter to see where the truth lies. Our test subjects were a flush factory Remington Probore (REM‑NP), a Kick’s Vortex non-ported choke (KV-NP), a Kick’s High Flyer ported tube (KHF-P), and a ported Patternmaster (P‑P) wad-­stripping choke. Before you plunk down $80 to $100 for an after­market model, here’s what we learned.

The main reason to buy an extended choke is the promise of improved patterns. Aftermarket makers use the choke’s internal geometry to stabilize payloads, or they employ studs or ports to promote cleaner separation of the shot from the shotcup.

At an underground range, using a Remington Versa Max, we shot patterns at 40 yards through the four chokes, using 3-inch, 12-gauge, 11⁄8-​ounce, 1550-fps Federal Speed-Shok “Blue Box” loads of 2s and BBBs. For both sizes, we fired 20 shots through each tube and calculated the percentage of pellets within a 30-inch circle.

Worth it, especially with smaller shot sizes. The ported tubes showed a 7 to 8 percent pattern advantage with No. 2 shot. The BBB patterned well from every choke, but the Patternmaster shot it noticeably better than the others.

As shot exits the muzzle, the pattern elongates, forming the shot string, the third dimension of a pattern. The shorter the shot string, theoretically, the harder the payload hits because more pellets strike the target at once. Some choke makers advertise shorter shot strings as a benefit of their products.

We measured shot strings by using a high-speed camera to time the interval between the first and last pellet strikes on paper at 30 yards. With pellet velocity determined by Doppler radar, we could then calculate the shot-string length.

No real help here. Choke choice did not affect shot-string length in any meaningful way. But shot size clearly did, with the BBBs stringing out much less. If your goal is to have shorter shot strings, shoot bigger shot.

Ported tubes, which vent expanding gases, are sometimes advertised as taming recoil and reducing muzzle jump by acting as muzzle brakes. As such, they do make your shotgun louder—by 4 decibels in our test. But do they mitigate recoil and jump?

Don’t buy a choke to reduce recoil. Our lightest kickers came with more muzzle rise, so it’s a trade-off, and the difference in kick was only 4 percent between extremes. In the end, the only good reason to buy a choke is to improve patterns. If you shoot close decoying birds, the factory Modified is all you need. But if you’re a pass shooter, or you’re good enough to head-shoot the close birds and reach out for the long ones, an after­market choke can indeed help.