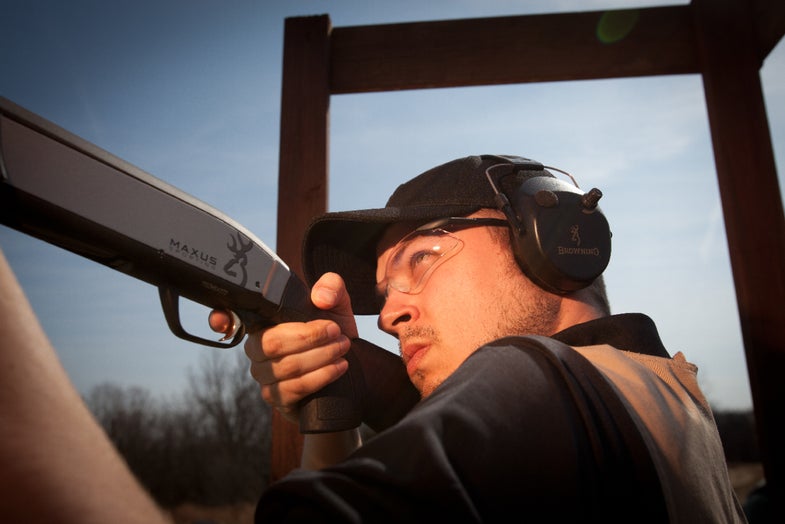 I spend much of my spring coaching our high-school shooting team, which means a lot of watching over kids’ shoulders as they shoot trap and sporting-clays targets. As such, I have a good idea of why people miss clays. There are many, but here’s a countdown of the top five most common ones.

5.) They’re not ready when they call for the target

If you throw the gun to your shoulder and yell pull, you might as well take the shell out of the chamber and pitch it at the target. I liken shooting a clay to lifting a weight. Which way can you lift more: if you walk up to a heavy object, grab it, and yank, or if you get set, breathe in, psyche up, think about what you have to do, and then lift? The latter, obviously. Shooting clays is similar. Get set, move your eyes off the gun, think a positive thought, and then call for the bird.

Every good shooter establishes a pre-shot routine. When I teach kids to shoot sporting clays and skeet targets (where the bird goes to a predictable spot) I tell them to shoot the target backward. Here’s how it works: put the muzzle at the breakpoint, and see the target break in your mind at that spot. Then, wind the muzzle back to your hold point, usually somewhere along and below the bird’s line of flight. Take your eyes off the gun and move them somewhere between the trap and the muzzle. Now you’re all wound up. Now, all you have to do is think a positive thought, call pull, and unwind.

You can’t use that method with trap targets, since you don’t know exactly where the birds are going, but you can mount the gun, get your eyes up off it, think your positive thought, and call for the bird. The positive thought is important, and should remind you to do something to help you break the bird, like see the target or head on the gun.

No, you can’t do this in the field, since shots take you by surprise, but it doesn’t matter, because what you’re building when shooting clays is confidence, muscle memory, and mental “sight pictures” of leads. It carries over.

This is an underappreciated miss (which might be a misleading term, for no one appreciates missing): Not keeping the gun below the target’s line of flight.

A lot of us were taught to blot out the target with the gun barrel, or to paint it from the sky. Both methods work often enough, but they risk occluding the target and causing a frustrating miss.

We all know “in front” is important when leading a target, but “below” is almost equally important. So long as the muzzle remains below a crossing or quartering bird, you’ll have a clear view of the target and be able to see where the barrel has to go. Block that target out with the gun and lose sight of it even for an instant, and your eye goes to the gun, which then causes the gun to stop. It’s easy to tell when shooters are occluding targets after you’ve watched them for a bit. Almost any miss above and behind means they got the gun in the way of their view of the target.

RELATED: 9 Principles of Shotgun Shooting Put to the Test

When you set up to call for a target, keep your muzzle low, even if, like me, you shoot low gun and it seems as though the gun isn’t in your way. For low crossers and rabbits at sporting clays, put the muzzle a lot lower than you think you need to. The other day at sporting-clays practice, we came upon a station with two low crossers, and I explained to the kids how they had to hold their guns very low in order to break them. Then, because I had my gun along, I decided to try it. I missed several, then asked one of the kids, “Where did you set up for this one?” “About two feet lower than you did,” he said. I started my muzzle two feet lower, and, suddenly, my shooting troubles went away. Two lessons here: Keep your muzzle below the bird, and do as I say, not as I do.

3.) They lift their head

Lifting your head means an almost certain miss over the top. Your head is the rear sight of the shotgun. When you raise a rifle’s sights, it shoots higher; the same thing happens when you lift your head off the shotgun stock. People raise their heads off of guns for several reasons. The first is a simple failure to follow-through. Following through with a shotgun means keeping your eye on the target and your cheek on the comb until after the bird breaks. Some people lift their heads to get a better view of the target’s breaking. But when you do that, the target doesn’t break. Gun fit causes head-lifting, too. If your gunstock has so much drop that you can’t see because your eye is buried behind the receiver instead of up over the rib, you’ll have to lift your head to see.

A hat pulled too low over your eyes can also cause head-lifting. The low hat brim creates a tunnel effect visually, and the target gets hard to see. The natural response is to peek. A better solution is to tip your hat back or turn it around backward. What’s more, recoil can beat you into the bad habit of pulling your head off the gun. It’s a natural reaction to want to get away from the source of pain. But head-lifting doesn’t reduce recoil, it just makes you miss—so the shot both hurts and sucks.

Lighten your ammo, make sure your gun fits, tip your hat back, and practice following through, by breaking a bird and following a piece of the target to the ground.

The second most popular reason for missing targets is a lack of focus, both visual and mental. Not looking at the target—and by that I mean really looking at, not just in its general direction—causes a lot of misses. Although “aim” is not an appropriate word for clay-target shooting (more on this to come), the exception is the saying “aim small, miss small.” The more precisely you look at the target—focusing your eyes on the front edge, not the whole thing—then the more precisely you will shoot.

Mental focus is just as important as visual focus. Keep your thinking positive, concentrating on what you have to do (see the bird, move in time with the target, etc.) in order to hit it. You have to purge your mind of distracting thoughts and keep it off your score, and not dwell on the target you just missed. Do your thinking before you call for the bird, then shut your mind off and react to it. Paralysis by analysis is definitely a thing in shotgunning.

The leading cause of missing with a shotgun—number one with a bullet, if you will—is aiming it like a rifle. Except for straightaways, quartering angles, and most trap targets, aiming a shotgun is the kiss of missing. Aiming is O.K.—until lead enters the picture. Then you have to look one place and point the barrel somewhere else and trust that the gun is going where it needs to. That’s difficult to do if you try to look at the bead.

A lot of top sporting-clays competitors remove or severely downsize the beads of their shotguns, so the muzzle won’t pull their eye away from what they are supposed to be looking at: the target.