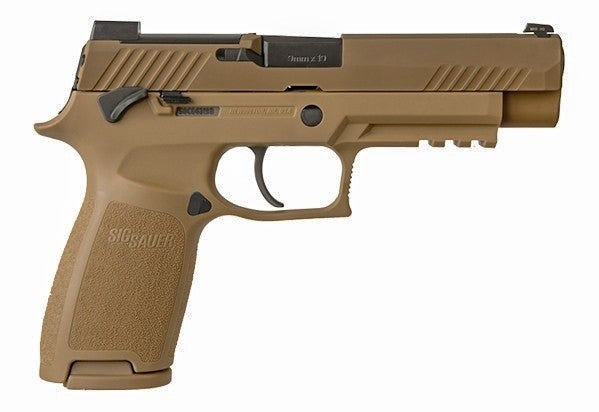 This all started as a “don’t believe the b.s. about guns that you read on the Internet” piece, but morphed into something much more than that.

Last week, my rheumy eye was caught by a news item (which I cannot now relocate) stating that the U.S. Marine Corps would no longer be issuing handguns to anyone except special ops. From now on, everyone from E3 rifleman to 05 battalion commander would have an M4 carbine and nothing else. The first reason was budget. Handguns cost money. The second was that handguns are simply not effective enough to justify issuing them. Since every Marine is a rifleman, simply hand out M4s.

This is Radical Thinking, but it’s not New Thinking. During World War II, the Army and Marines adopted the underpowered, unreliable, and inaccurate M1 carbine because they were concerned about the suitability of the highly effective infallibly reliable Model 1911 pistol*.

But all this didn’t quite ring right. The Marine Corps, more than any other branch of the service, is big on what the Arabs call wasta. This refers to a leader’s symbol of authority and respect. Did it seem likely that the Corps would strip officers and staff NCOs of a badge of rank as potent as a pistol? What a waste of wasta.

So I set my military contacts to work to see what they could learn. They checked, and were able to find nothing about doing away with handguns.

The truth is quite the opposite. The Marine Corps (and the Army) has decided that a handgun is a versatile and effective tool that can be adapted to all sorts of situations that an M4 carbine can’t, and has gone on a veritable handgun-buying binge.

The handgun/no handgun situation was brought to a head because the big, clunky, semi-reliable, and thoroughly unloved Beretta M9s, which were adopted in 1985, are now worn out and needed to be replaced.

The Army acted first, and chose what it calls the Modular Handgun System—the M17, a modified SIG-Sauer Model 320** that can be reconfigured depending on who you want to shoot and under what conditions. It’s in 9mm, as is the Beretta, but ball ammo has been replaced by hollow-point Speer Gold Dot bullets, so that if anyone is hit by the 9mm, they may actually be inconvenienced.

The Marine Corps was slower to act. Some Marines still carry M9s. Others have been issued Glocks, which are lighter and more concealable. Marine Special Ops personnel have been using updated Colt 1911s in .45 ACP, but those have been replaced by Glocks as well.

In the end, the Corps went along with the Army choice, and will be carrying the MHS. The Marines are sticking with the 9mm because they found that, due to its light recoil, you can put more shots on a target, quickly, or switch targets, faster, than you can with a .40 S&W or a .45 ACP.

M17s, and its more compact version, the M18, have already been issued to the Army’s 101st Airborne Division. The Screaming Eagles, according to all accounts, like it very much. It’s simple to operate, has excellent ergonomics, is accurate, and works well even in small hands. The Army intends to issue 238,000 of the new guns. The SIGs will come with three different grip sizes, Tritium night sights, and three magazines. The standard mag holds 17 rounds, while the other two are extended and take 21. The Army holster is made by Safariland, and comes in a standard model, and one that will take a suppressed pistol.

I should close with a nod to Army Chief of Staff General Mark Milley, who became enraged by the news that it would take two years to test the SIG at a cost of $17 million, and in a speech on March 10th, said:

“We’re not figuring out the next lunar landing. This is a pistol. Two years to test? At $17 million? You give me $17 million on a credit card, and I’ll call Cabela’s tonight, and I’ll outfit every soldier, sailor, airman, and Marine with a pistol for $17 million. And I’ll get a discount on a bulk buy.”

Very shortly thereafter, the Army got the MHS. I’d give General Milley another star, except he already has four, and you can’t have five unless war has been declared. A simple “Well done” will have to do.

* During World War II, there was much whining about the recoil of the 1911, and its supposed inaccuracy. If you’ve never fired a handgun before, which most servicemen hadn’t, the .45ACP will seem like a hard kicker. The inaccuracy charge came from the crude, poorly designed sights on the 1911, loose wartime manufacture tolerances, badly worn pistols, and the Army’s sometimes impractical combat techniques.

** Pre-military-evaluation models of the 320 were alleged to go off if you dropped them on their hammers. SIG states that this problem was corrected before the Army got the MHS for testing, and that ones in the hands of the troops are fine.