So You Want to Shoot More Banded Waterfowl?

These duck and geese experts, who have collected their share of bling, share their best hunting tips and favorite band stories 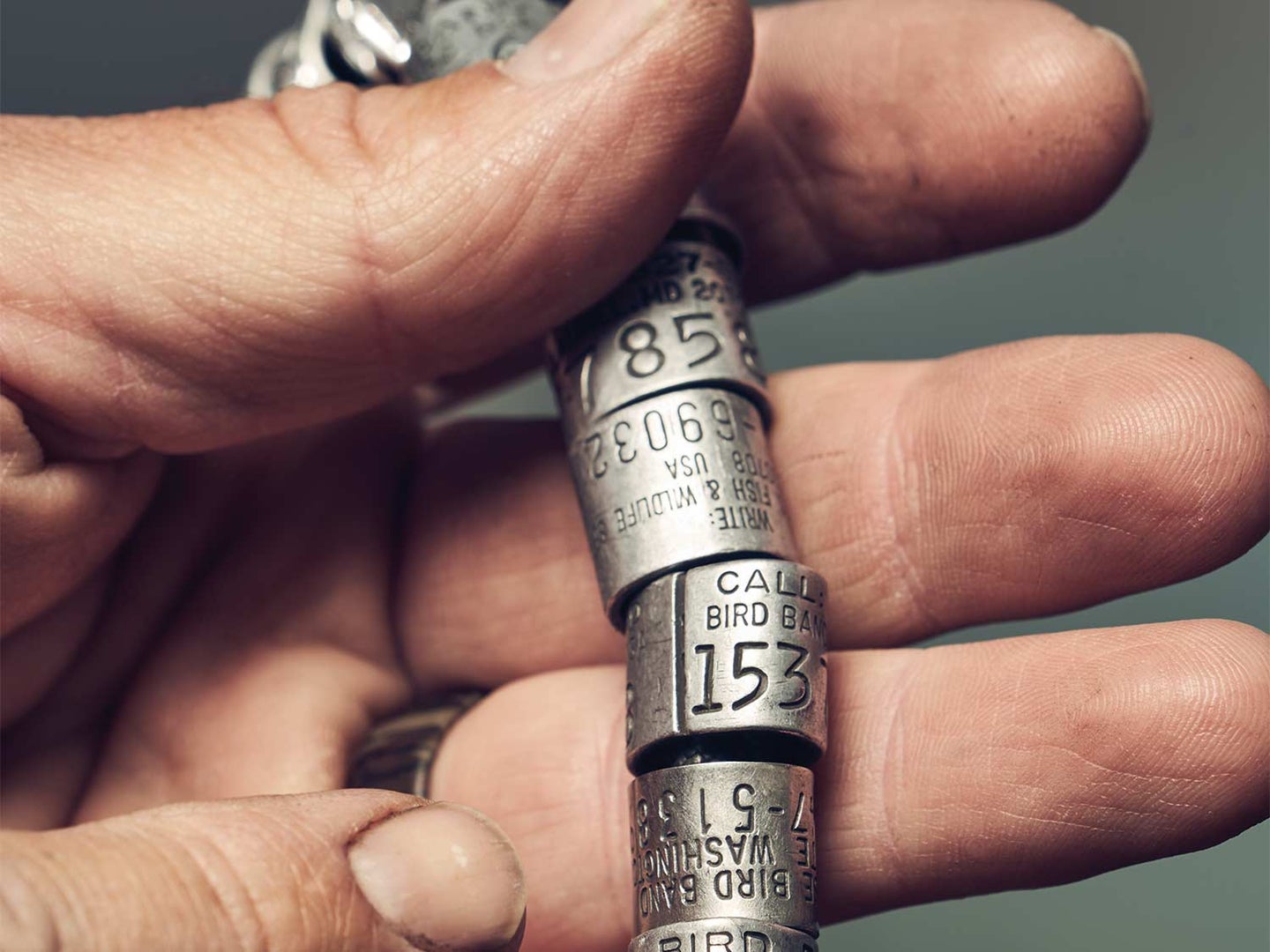 Saunders has been amassing his collection of waterfowl bands since he was a kid. Ian Allen
SHARE

The Setup: “We’re lucky to have a great spot, a stone’s throw from the refuge line,” Saunders says. “The geese are tough to decoy on their way out in the morning. They won’t relax until they’ve flown 4 or 5 miles. I tell my hunters, ‘Don’t worry. We’ll get ’em on the way back.’ Geese are pigs, and they can’t resist a bite on the way home. “Because we hunt in alfalfa fields just an inch or two high, we can only hunt from pits. Our pits are really well manicured, and we’re careful not to disturb the ground around them so they stay invisible. There have been times when I forgot to mark a pit, and I have had to crawl around on the ground, banging with my fist to find it.”

Bring Them In: “I use 80 to 100 stuffers,” Saunders says. “That way, I never have to worry that geese aren’t working because the decoys aren’t realistic enough. The truth is, we’ve created a monster. When we started with stuffers, the geese would come right in. Now they’re afraid to land with their own kind. I don’t do Xs and Os. I try to scatter the decoys realistically and put the tightest clump of decoys upwind. I set decoys at least 20 or 25 yards from the blind, not all around it. That way, I know all the guns will be pointed in the same direction when we shoot.

“I own a call business and have won state and regional calling contests, but people who hunt with me are always surprised at how little I call. Real geese don’t make a lot of noise on the ground.”

First: A Canada goose at Lake Lowell, Idaho. “In those days, you wrote to the FWS to report the band,” he says. “I remember checking the mailbox every day for my certificate.”

Farthest: Wrangel Island on the edge of the Siberia Sea. “The snow geese are banded in towns with ­Russian names 30 or 40 ­letters long.”

Most Unusual: “I shot a mallard some guy had banded illegally in his backyard right in Seattle.”

Precious Metal: “I almost died saving a dog on a day when we shot two bands, including the first stainless mallard band I ever saw. The dog broke through the ice in 20 feet of water, and I lost all my fingernails clawing my way out, but I saved myself and the dog.”

The Setup: “Our flooded holes aren’t like what you hunt in Arkansas,” Vandemore says. “Ours are natural lakes in the woods. You wouldn’t see a duck in there on its own, but the lakes are between the refuge and the places where ducks feed, so you can convince them to drop in. “We build our blinds on the southeast or southwest corner of the hole, so I’m not looking into the sun all morning, which gives me a headache, and those shadows help hide the blind. You get the sun at your back, you can do jumping jacks inside the blind. If the birds flare hard, it’s a problem with concealment, so we’ll put more brush on the blind.”

Bring Them In: “I’ll use 10 or 12 dozen mallards, and sometimes bump it up to 15 dozen if we have stale ducks. Later in the year, I’ll pull the ducks and use Canada goose floaters to give the birds something they haven’t seen. Ducks are comfortable landing with geese. If the birds circle and circle like they want to come in but won’t, there’s a problem with the spread. We will get out and rearrange the ­decoys as often as we have to until the birds are finishing the way we want them to. As for calling, you have to get loud so those high birds can hear you. Some days, we’ll have two or three callers in the blind. I’ll watch until I see one mallard react—then I’m calling to that duck. If I can get that one in, the rest of the mallards will follow.”

First: “It was so long ago, I don’t remember, but it would have been a ­Canada goose. I remember hunting with my uncle when I was 8. Five geese came in. He shot three, and I shot two. One of his and one of mine had bands with consecutive numbers. It was my first double on Canada geese.”

Most Unusual: A banded and radio-collared mallard from Arkansas.

Precious Metal: “One of my clients’ teenage son shot a beautiful blue goose with a band so old, it was ­paper-​thin and all the lettering was worn off. It was his first band. At the end of the hunt, they were packing up to leave, and the boy gave me the goose. He said, ‘No one back home in Las Vegas will even know what this is. I want you to have it and mount it in the lodge.’ Everybody gets so band crazy, so I was really impressed with this boy giving me his first band.”

The Setup: “Location is the most important part of field hunting,” Murphy says. “You can traffic mallards, but it’s best to be on the X. Where I hunt in Canada and New York, if there are geese in a field, there are probably ducks too, so that’s how I usually find them. Ducks feed early and late—and they can feed quickly. But if there’s water in the field or it’s a rainy day, then they will stay all day. With field mallards, you need overhead cover so they can’t look down and see you. I like A‑frame blinds. Birds don’t ­associate them with danger the way they do layout blinds. Shadows aren’t a problem once I’ve made the blinds look like brushpiles. If there is water in the field, I will set the blinds right at the water’s edge.”

Bring Them In: “Even if I’m only hunting ducks, I’ll use goose decoys,” Murphy says. “I set them in a T—with the stem of the T running 35 yards away from the blind, and the top of the T right in front of the blind and running as wide as 60 yards to either side. I put two spinners 15 yards from the blind and set them perpendicular to one another so they show up from any direction. You don’t have to call much in a field. Let the location and the decoys work for you.”

Farthest: A greater snow goose from Ellesmere Island, the northernmost point in Canada.

Most Unusual: In 2011, Murphy and a buddy shot a pair of snow geese that had been banded together as adults in 1997.

Precious Metal: “I was duck hunting with some friends, and we had gotten all our mallards and all but one black duck,” Murphy says. “The hunting had really slowed down, but we decided to stay until 3 o’clock. At 2:58, one of my buddies said, ‘Let’s pick up the decoys.’ The guy who needed one black duck said, ‘No, we decided to stay until 3.’ And then, at exactly 3 o’clock, a mallard-black hybrid came in, and my friend shot it. That duck was double banded.”

The Setup: “I’ll go out at daylight and look for the flight line and get under it,” Anderson says. “If I can set up away from where the birds are sitting, I can hunt them for a few days. I hunt from a grassed-up boat blind, but if you try to hide a grassed-up boat against a background of, say, willows, it will stand out. It’s important to bring a saw or a hedge trimmer to help you collect native materials and add them on the spot so you can blend in. I like the sun at my back or to the side to help me hide. When we hunt sandbars, we pull the boat all the way up onto the bar. It’s a pain, but river hunting often is. Ducks don’t like it if they can see water between the sandbar and the boat. Tumbleweeds are the best hide.

“River hunting can also be dangerous, especially late in the year when it’s cold. Take your time, don’t go out in the dark, and always take more than one boat. One day, it was minus 18. We left in three boats and came back in one, but we shot 25 greenheads.”

Bring Them In: “We use two to four dozen goose floaters and 40 to 100 ducks. You need to go big on the river I hunt. Some people like a natural spread, but I want a spread that will corral ducks. I put a blob of Canadas upwind, then string out ducks downwind and make a landing hole. The one realistic thing I’ll do is set my ducks as close together as possible without them touching, because that’s how real ducks sit on the river. As for calling, I’m loud. I always say I will either blow them in or blow them out.”

Farthest: A Canada goose from the Peace River area in northern Alberta.

Most Unusual: A 17-year-old honker.

Precious Metal: “After all those years of goose hunting, I had a lanyard full of bands,” Anderson says. “One morning, hunting at my parents’ place in northern Minnesota in 2015, I was having trouble with the boat motor. I took my lanyard off, set it down, and forgot about it. I never saw it again, and I lost 20 years’ worth of bands. I have just three mallard bands now. I don’t hunt geese much anymore, and they don’t band nearly as many ducks as they do geese. Bands still mean a lot, but they don’t mean as much as they used to. Even so, I’m thinking I might have to start goose hunting again.”

Why Waterfowl Bands Are Important to Conservation

Bands are a crucial research tool for waterfowl managers. Return data helped the USFWS identify and define the four flyways that form the framework of North American waterfowl management. The data also helps with setting season dates and bag limits, and with research into migration patterns. And it is used to justify expanding hunting opportunities, not limiting them. For instance, my home state of Iowa had a two-goose limit on Canadas for years, largely to protect a stable resident population. Band returns showed that early in the season, almost all the geese shot were residents, but later on the take was split evenly between resident geese and migrants, and increasing the bag limit wouldn’t affect resident populations. As a result, our limit now goes from two geese to three on November 1.

It’s not just waterfowl hunters who have bene­fited from band returns. California runs a citizen banding program in which trained volunteers band doves. Data from the program led the state to raise the bag limit from 10 doves to 15 in 2014.

How to Decide Who Gets a Band

Because waterfowling is usually a team sport, it’s common not to know for sure exactly who killed a banded bird. There’s even a shell made for just such a situation: Spectra Shot comes in four different pellet colors, the idea being that everyone in the group buys a different colored box so you can conduct an autopsy to find out who shot the bird. Of course, most of us don’t go to such extremes.

Back when calling champion Mike Anderson hunted with the same four friends, they took bands in turn if no one knew who shot the bird. It’s more common to do a coin flip or, if it’s a big group, dump the appropriate number of shells into a hat and see who pulls the odd-colored one. Bill Saunders has seen all sorts of drawings. “Once somebody brought his baseball cards,” he says. “We all picked one, and the highest batting average took the band.”