The Long Game: How to Select the Best Long Range Cartridge 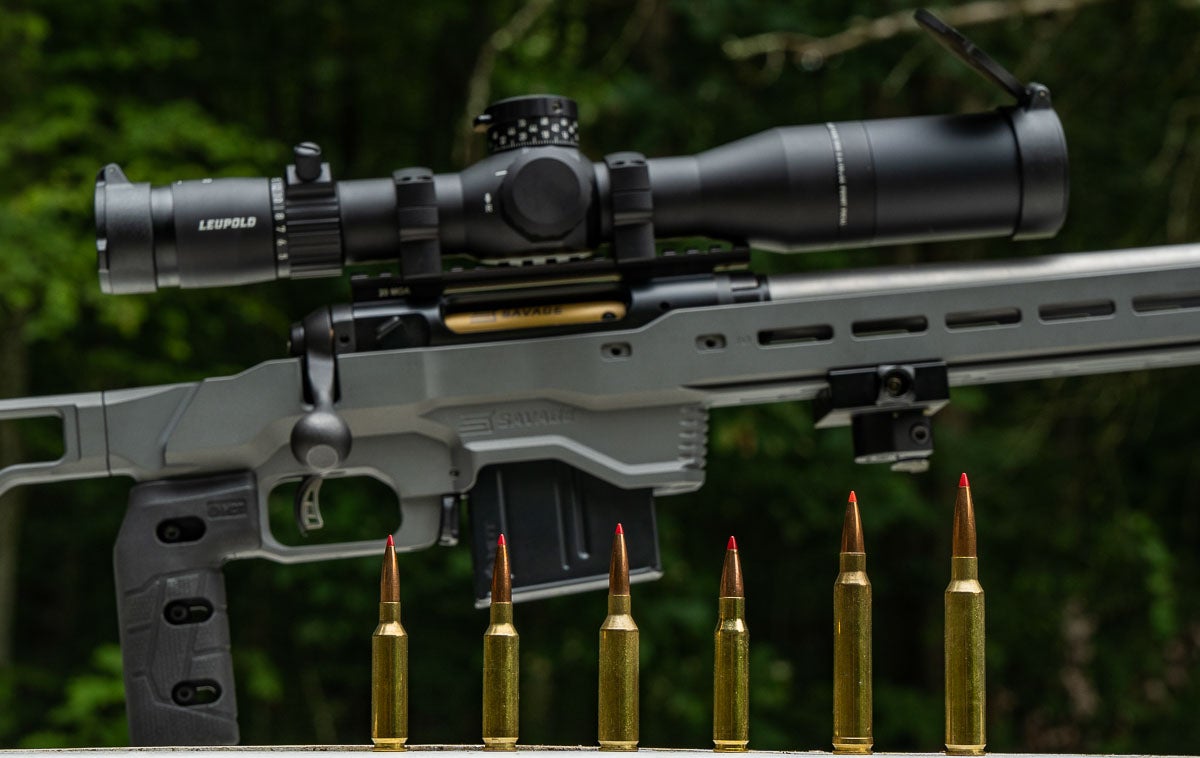 The selection of a long-range cartridge is not as important as matching that cartridge to your rifle and level of recoil tolerance. (From left: 6mm Creedmoor, 6.5 Creedmoor, 6.5 PRC, .308 Winchester, .300 Winchester Magnum, .300 PRC). Richard Mann
SHARE

The Long Game is a new series designed to improve your long-range-shooting skills. This story is the third installment.

Here we’re looking at the most debated but maybe least critical aspect of shooting farther, and that’s the choice of long-range cartridges. This is because the flight paths of bullets fired from any cartridge can be calculated. The difference is that the faster time of flight of some cartridges can make up for minute errors made while obtaining a ballistic solution. The other thing to remember with cartridges is that they’re just there to launch bullets. Two bullets with very similar BCs, fired at very similar velocities, will have very similar flight times, regardless of the cartridge. Also, a low-BC bullet fired fast, many take longer to reach a target than a higher BC bullet, fired slow. And, due to a variety of factors, some cartridges kick harder.

As a comparison, let’s look at the now very popular and light recoiling 6.5 Creedmoor and the older, harder-kicking, .300 Winchester Magnum. Based on factory advertised velocities, which by the way are never right, with one of its best loads at 1,000 yards the Creedmoor will have a time of flight of right at about 1.491 seconds. The .300 Winchester Magnum, again with one of its best loads, will have a time of flight of about 1.466 seconds. They’re very similar in terms of external ballistic performance. However, out of a 14-pound rifle/scope combination, the 6.5 Creedmoor will generate about eight pounds of recoil energy. The .300 Winchester Magnum on the other hand will generate about twice the punch to the shoulder.

Does this matter? Of course, it does. Lighter recoil makes for longer and more enjoyable range sessions. And no matter what anyone tells you, the less a rifle recoils, the easier it is to shoot more accurately. You may believe you’re tough, but trust me, if you fire a hundred or so rounds with a rifle generating more than around 15 foot-pounds of recoil energy during one range session, you’re going to feel it, and it will negatively impact your shooting.

For 1,000-yard work there are many long range cartridges that will do the job and do it very well. Before you make your choice, another thing you need to consider is the availability of factory ammunition that’s suited to long-range shooting. Some cartridges that are well configured for stretching the distance, are not well supported for that type of shooting by a lot of ammunition manufactures. Unless you’re going to load all your ammunition, this matters a lot.

Cost to shoot is another important consideration when it comes to cartridge selection. Precision ammunition of any type, for any cartridge, is not cheap. This applies to factory ammo and handloads. Larger caliber, heavier bullets cost more, and a .300 Winchester Magnum will give you only around 90 shots per pound of powder, while a .308 Winchester will give you 175 shots out of a pound of powder, with the same bullet.

Seven of the best cartridges for shooting at 1,000 yards, that are also well supported by ammunition and bullet manufactures, are the following:

The 6mm and 6.5mm cartridges will offer the lightest recoil, the .300 PRC and Winchester Magnum kick about twice as hard. And the .308 Winchester falls somewhere in the middle. If extreme long-range shooting—beyond 1,760 yards, which is a mile—is something you think you’ll ultimately gravitate to, then the .300 PRC and .300 Norma Magnums are the better options.

The key with cartridge selection is to not let your emotions get in the way. For some reason, humans develop strong emotional relationships with, and impressions of, cartridges. They may rate the Creedmoors as nothing but cartridges for millennial snowflakes, but may trust the .308 Winchester and .300 Winchester Magnum with their life, because, well, it’s an Army thing. External ballistics is a science, not a feeling. Pick the cartridge that best suits your needs, that you can afford to shoot a lot, and that will generate a tolerable level of recoil in your rifle.