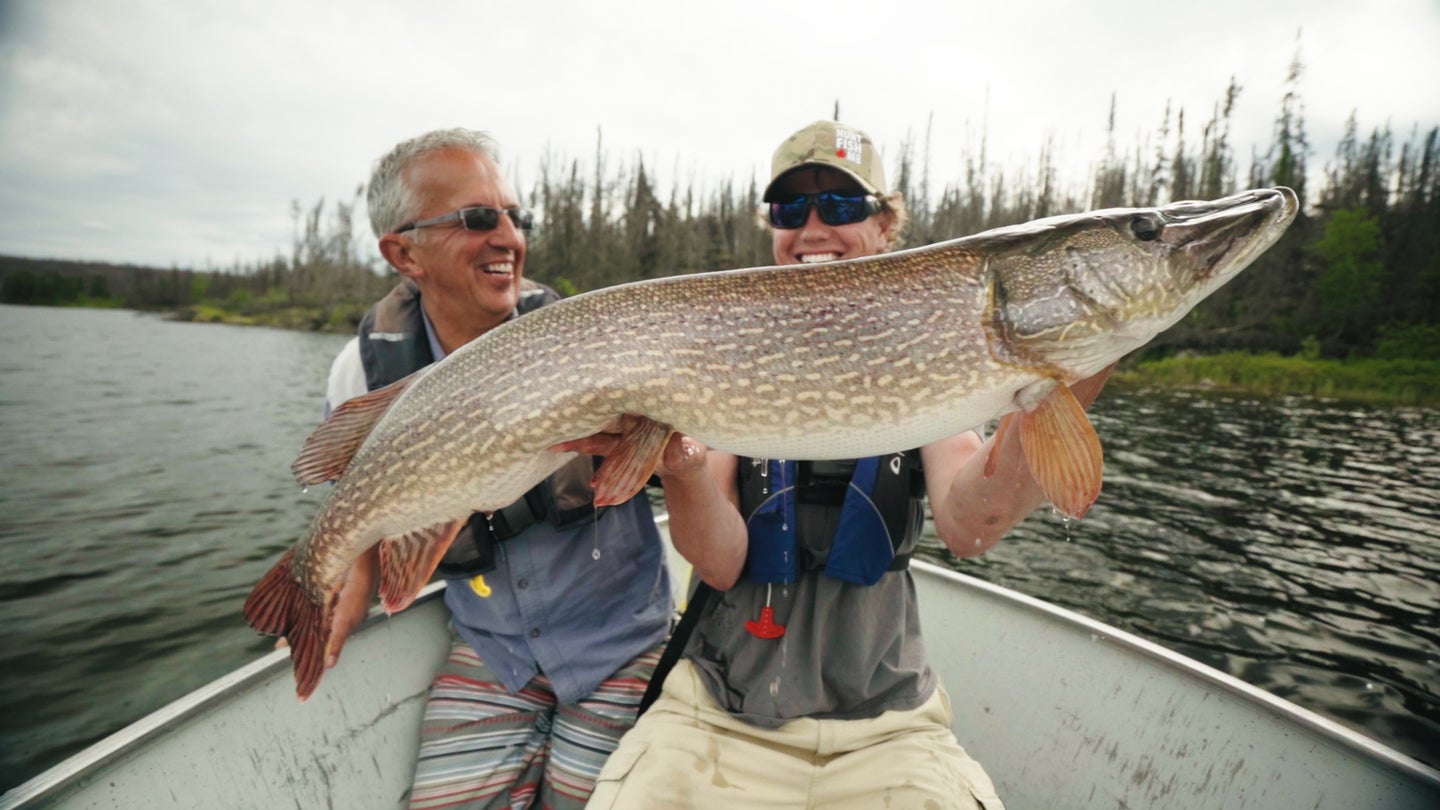 As a new year begins and winter takes hold, I sit inside, impatiently waiting for spring to arrive. Sure, there are plenty of winter activities to enjoy, but I have come to resent the cold. That’s because the cold is what is keeping me — and everyone else — from the lake, the boat, and the fish that will be on the end of my line, eventually.

The diehards spend the winter months ice fishing — where you sit in a small shack and use a miniature rod to fish through a hole in the ice. Although Manitoba has some of the best ice fishing opportunities in the world, open water fishing is where my heart is at. But, then again, when it comes to fishing, I’ve been completely and utterly spoiled.

When I say “spoiled,” I mean it in the true sense of the word: I grew up on the lake in a small town in Manitoba, Canada. In the winter, my dad dragged our ice fishing shack out onto the ice like most of our neighbours, but ice fishing was just enough to get us through the pain of winter. When spring arrived, the real fishing began.

While most people fished off their dock or from their boat in the summer, my dad had a small float plane moored by the water, which meant we had access to remote lakes where the fishing was unlike anything close to home. (Not that the fishing back home is bad. Quite the opposite, in retrospect.) It was at these lakes, which are only accessible by plane, that I was spoiled by having that fish on my line after just a cast or two; by reeling in dozens of fish in just a few hours; by being one of only two people on the lake at any given time; by countless shore lunches of fresh-caught walleye and bass; and by being able to have this experience all summer long, whenever I wanted. When you’re a kid, you don’t know how good you’ve got it. As an adult, I have a deep appreciation for both the fishing trips I enjoyed as a kid, and for still being able to go on a fly-in trip or two every year.

There is something truly special about a fly-in trip, and the moment the float plane drops down onto the lake and touches the otherwise untouched water. There are no houses or jetskis or, well, anything for miles. It’s just you, the water, and the unknown number of fish you’re about to catch. Your worries and problems immediately feel miles away and unimportant, and you realize that’s because your worries and problems are miles away and unimportant. The clean air clears your mind, and suddenly the only thing on your to-do list is getting your line in the water.

I don’t think I’ve been on a fly-in trip where I didn’t catch dozens of fish. Even on the worst trip, when the fish weren’t biting (by fly-in standards), we’d still catch a few dozen before calling it a day. Yet those days a few and far between, as the remote lakes of Manitoba consistently deliver the hands-down best freshwater fishing imaginable. And when I say the fishing is spectacular, it’s not just me and my slightly biased experience talking: Manitoba is a premiere fly-in fishing destination, and every summer thousands of anglers come here from across North America to get a taste of the action.

The Manitoba season starts in mid-May and continues through September or early October, depending on the lodge and its location. Anglers generally set out looking for Northern Pike or Walleye, but Lake Trout and Smallmouth Bass are also popular, though not as common (some lakes have them, some don’t). And you don’t need a dad with a plane to get the experience: There is a lodge and a lake for almost everyone, whether you want 5-star accommodations and a fully guided experience, or a rustic cabin on a remote lake where the plane drops you off and doesn’t come back until it’s time for you to go home.

Fly-in fishing trips used to be reserved for so-called “guys trips” and corporate retreats (and both remain popular) but many operators have seen an increase in family-focused trips in recent years, as well as more women than ever before — and unlike in years past, many women now leave the kids (if they have any) at home so they can focus on fishing.

“Last summer, 1 out of every 4 guests was female,” says Pit Turenne of Aikens Lake Lodge, noting the lodge emphasizes gourmet meals, has put king size beds in all of its cabins, and offers what he calls a “soft wilderness experience.”

Jessica Jackson of Eagles Nest Lodge concurs. “We’re offering an experience, it’s not just the fishing,” she says. “It is first class service in the middle of nowhere.”

Still, many anglers yearn for the rustic, remote fly-in trip, and operators are more than happy to oblige. Kississing Lake Lodge and Jacksons Lodge and Outposts operate their own air services and have cabins on various lakes — 9 lakes and 16 lakes, respectively — while Laurie River Lodge has boat and motor caches at 21 different lakes, where guests can be flown in in the morning and are picked up and brought back to the lodge at night. That option is particularly special — and is akin to the style of fly-in fishing I do with my dad — because it provides the opportunity to, for example, try a trout lake for a day, without changing the focus of your entire trip.

The options might seem daunting, yet a fly-in fishing trip to Manitoba is a no-brainer. But again, don’t take my word for it: 4 out of 5 guests book another trip the following year, and despite most of the 2021 season being pre-empted by covid, few folks asked for their deposits to be returned. As it turns out, I’m not the only one impatiently waiting for the fly-in fishing season to return.

Additional Tips for Your Next Manitoba Visit

While Manitoba’s lakes aren’t renowned flyfishing destinations, those who insist on packing their fly rod can find success in late May and early June when Northern Pike are spawning in shallow waters. Brent Fleck of Laurie River Lodge says that’s when Northern Pikes can be seen at depths of 6” to 24”, and will hit almost anything — including a fly.

Still, your time is probably best spent with a more classic set-up, anywhere between 20 and 10 feet below the surface — depending on where you are and what you’re going for, of course.

Early in the season, the focus is primarily Northern Pike and Walleye. Northern Pike are ferocious freshwater fish, and when they bite, the fight is on. Set your drag accordingly, because these fish have a lot of thrash in them, and it’s not uncommon to land Northern Pike in the 35-40+ inch range.

Walleye are most folks’ favourite fish to catch (and eat), but they’re also the easiest to catch and, in most lakes, the most plentiful. They also bite consistently throughout the season, although the early and mid summer tend to be better than the fall. Any Walleye over 28” is considered a Master Angler in Manitoba.

Lake Trout don’t offer the action of Northern Pike or Walleye but time and patience can pay off, either in the depths of the deeper lakes (Aikens Lake is the second deepest in Manitoba, at 295 feet) using downriggers to drop down to 60-120 feet, or in shallower lakes later in the season as the waters cool, using a 2-oz jig with a stinger to get into the cool crevices. Either way, once one is on the line, it is far from over. Slow and steady is the name of the game, and it can take considerable time to bring one up to the surface. By the time a Lake Trout is in the boat, both of you will likely be exhausted. But these fish, which on a good day are in the 30-40” range, are absolutely worth the wait and effort.