Blast from the Past: Stevens 40 ½ Pocket Rifle

This rare oddball of a gun has a great family story 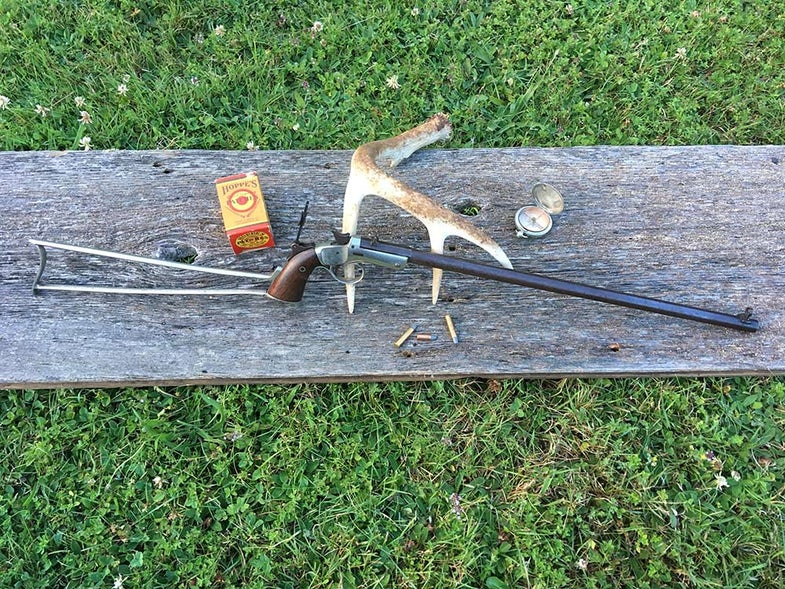 While it was compact, the Stevens Pocket Rifle won't fit inside any normal pocket. From Fitch270
SHARE

Today’s gun is a Stevens Pocket Rifle. To be clear, it wouldn’t fit into your pocket unless it was a very deep pocket, as the Pocket Rifle had a barrel ranging from 10 to 18 inches long. But, the gun was compact, had a removable stock, and it was based on the Stevens Pocket Pistol, hence the name.

Joshua Stevens worked for many years for various manufacturers in Gun Valley before founding J. Stevens & Co. in Chicopee Falls, Massachusetts, in 1864. He patented a tip-up single-shot pistol that was the basis for a whole line of pocket pistols that put Stevens Co. on the map and made Joshua Stevens rich.

Stevens guns were quite accurate, and by 1901, Stevens was one of the leading sporting arms makers in the world. Interestingly, although not germane to today’s gun, New England Westinghouse bought Stevens in 1915 specifically to have a gun factory to fulfill an order for 1.8 million Mosin-Nagant rifles for the Czar of Russia. Unfortunately for Westinghouse, Stevens, and the Czar, the Russian Revolution came along and the Czar was killed, and Westinghouse was never paid for the 770,000 rifles it made—and Stevens was left a shell of its former self. Westinghouse, no longer in need of a gun factory, sold Stevens to Savage in 1920.

Today’s gun comes from happy times at Stevens, somewhere in the years between 1884 and 1896 when the factory was growing by leaps and bounds and the New Model Pocket Rifle was being produced in several rimfire calibers from .22 to 44, although only about 1,500 of the Vernier sight models were ever made.

This is my Stevens 40 1/2 Vernier New Model Pocket Rifle in .25 rimfire. My grandfather gave it to me a couple weeks after my 13th birthday with conditions: He told me his grandfather had given it to him, and I was to give it to a grandson someday. Once I turned 30, or if something were to happen to my dad and we needed the money, then I could sell it. Grandpa passed of an unexpected heart attack a couple weeks later, the day before the deer opener.

It turns out he fibbed. My dad’s older brother was a kid when he found the rifle in the rafters of an old milk house on the property they’d bought. The gun was probably used for pest control in the barn.

I don’t know for sure what my grandfather’s reasoning was, but apparently he had told folks for years he wanted me to have this rifle. He had no will when he died and it took years to settle his estate. He had eight kids and over 30 grandkids. There’s no way I’d have ended up with it if he hadn’t given it to me when he did.

I shot it a few times just after he died, but ammo is hard to find, pricey, and not reloadable. I have a few boxes left, waiting for the next owner in line.

The Pocket Rifle is the perfect Blast from the Past subject. It’s unusual, rare, and it has a family story. That’s the kind of gun we love here, but we aren’t picky at Blasts from the Past. We need your old gun pictures. Keep them coming to fsgunnuts@gmail.com.

Blasts From the Past
Guns
Hunting
military
Rifles