How to Weatherproof Your Rifle

Five keys to keeping your rifle running in the worst conditions 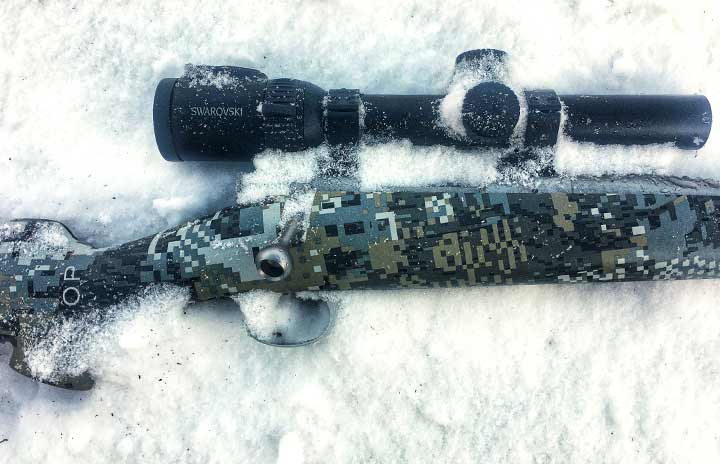 Marcus Aurelius, the last “good” Roman emperor (meaning any emperor whose social life did not involve sheep or goats) said that “The secret of all victory lies in the organization of the non-obvious.” Translated to what you and I do, this means that hunters who are thorough and meticulous and anticipate screw-ups are less likely to fail.

One of the chief causes of failure is weather. Weather is getting worse; that’s the bad news. The good news is that rifles and scopes are far more resistant to it than they used to be. But you still need to be vigilant. So, let’s break this down.

One of the chief causes of failure is wood stocks. Wood is wonderful stuff, but it’s also treacherous. My friend Norm Nelson, who worked in the forestry industry, pointed out that a tree is a pump so powerful that it can bring water from far below ground and move it a hundred feet into the air. Trees are made out of wood. Do I have to paint you a picture? Even stocks that have been perfectly stable can go weird on you. I’ve had that happen multiple times.

There are a number of partial solutions: Seal all the wood on your stock, especially end grain, and then pray a lot. Or replace your wood stock with a synthetic stock. Or take the middle ground and get laminated wood, which I like very much. I’ve had my Ruger Gunsite Scout Rifle out in unspeakable weather, and its laminated stock doesn’t budge. Ruger’s laminated wood is like rock. Years ago, laminated stocks were made of comparatively thick slabs of wood glued together, and the stocks were mostly wood. Today, the laminations are very thin, and soaked in epoxy, and these stocks are mostly glue.

Rust does not help. Cosmetic rusting can annihilate the value of a gun, and rusting of moving parts, like trigger components, can cause it to shut down. Bluing is not much of a rust preventer. I’ve had blued metal rust overnight.

“Stainless” steel rusts just fine, thank you. It doesn’t rust as fast as chrome-moly, but it rusts just the same. My aforementioned Scout rifle is bead-blasted stainless steel, and before deer season I take the metal out of the stock and slather on a heavy coating of Break Free LP (not CLP), on every part that’s covered by the stock, including all the little nooks and crannies, let it sit overnight, and then wipe off the excess. Even after the rifle has been drenched repeatedly, I’ve never had a fleck of rust.

When hunting, I keep the Break Free handy, wipe the gun off at the end of the day, and don’t bring it indoors between hunts, where it will warm up and sweat.

If you’d like to stop worrying about rust, get a rifle with one of the third-generation rustproof coatings, like Cerakote, instead of bluing. They work. (The earlier “rustproof” finishes that began showing up in the 1980s, most notably electroless nickel, did not work.) If you already have a blued rifle, send it off to Florence, Mississippi where Mr. Walter Birdsong will give it his Black-T coating, which is tough as nails and doesn’t rust. Birdsong does careful, meticulous work, and his finish looks so much like good bluing that you can’t tell the difference.

3. Use the Right Amount of Oil

During my formative years, it was gospel that you used a very, very light hand with oil because it would gum up in cold weather. This was good advice because gun oil was actually oil, and it did turn to sludge or varnish. Today, most gun oil is synthetic, and will not gum up except in extreme cold.

ARs have complicated the picture. Bolt actions, levers, pumps, and civilian autos need very little oil. ARs, however, thrive on it. I have been chastised by at least two gunsmiths for shooting my two Powerful Assault Rifles too dry. So be it. Now I oil them, if not copiously, at least not sparingly, and they seem happier.

Conventional triggers have no tolerance at all for oil. At least once a year, flush out your trigger with lighter fluid. The trigger will be grateful. If you’re hunting in truly cold weather—down around zero, or below—get all the grease and oil off your firing pin too. AR triggers are the opposite. They are not meant to be shot unlubricated. Geissele, which makes some of the best, even recommends which gun grease they want you to use.

Dirt will screw up any rifle, and cold is a force multiplier for dirt. It’s one thing to have oil in the action. It’s another to have sludge, which is old oil, plus powder fouling, plus low temperatures. Every fall gunsmiths face a tidal wave of besludged rifles that will no longer function. If you’d like to de-sludge your firearm, get a can of Birchwood Casey Gun Scrubber and hose down the action. Don’t be shy. Birchwood Casey will make more. Gun Scrubber will not only clean out your guns, but will also kill wasps, hornets, and mosquitos, lift stains, remove package adhesive from knife blades, and, for all I know, cure leprosy. I expect that half the Gun Scrubber I use in a year ends up on bugs. I enjoy their screams as they hit the garage floor.

A small piece of camo tape over your rifle’s barrel will keep rain, snow, and ice out. RELIANCER

Water down the barrel, whether it be rain, snow, or ice, can get you in real trouble. The prevention is simple: Put camo tape or black electricians tape over the muzzle. I’m at the point now where the only place I don’t do this is in Africa, and there I stick the rifle in its case to keep dauber wasps out of the bore.

For those who have flash hiders, tape those up too. I do it to my Gunsite Scout, and when I pull the trigger all the tape vanishes. There may be a shred or two left clinging, but 99 percent of it is vaporized by the air rushing up the barrel ahead of the bullet, and by the muzzle blast.

5. Take Care of Your Optics—and More

Good scopes now really are waterproof, and the makers of quality scopes and binoculars now use lens coatings that are hydrophobic, which means they don’t like water, which means that almost all of it runs off and the little that remains forms miniscule beads that will not interfere with your sight picture. If your lenses are not thus coated, get something that is. In the real world of hunting, it’s an enormous advantage.

And take your lens caps—unless there’s something the matter with you, I assume you have lens caps—off at night. They can cause water to condense and freeze. Maybe this won’t happen on hydrophobic lenses, but I’m unwilling to find out.

Bring an extra scope too. Who knows?

And while you’re at it, bring a strong, takedown, .22-caliber cleaning rod. Stuck cases and live rounds happen. Why .22 you ask? So it will fit any bore, not just yours, I retort.

Once your rifle gets good and cold, leave it good and cold. Unlike you, it works better if it doesn’t get warmed up.

And let a smile be your umbrella.