5 Cooking Techniques to Make You a Better Wild Game Chef

Master these techniques, and you’ll be able to cook any kind of wild game meat to perfection 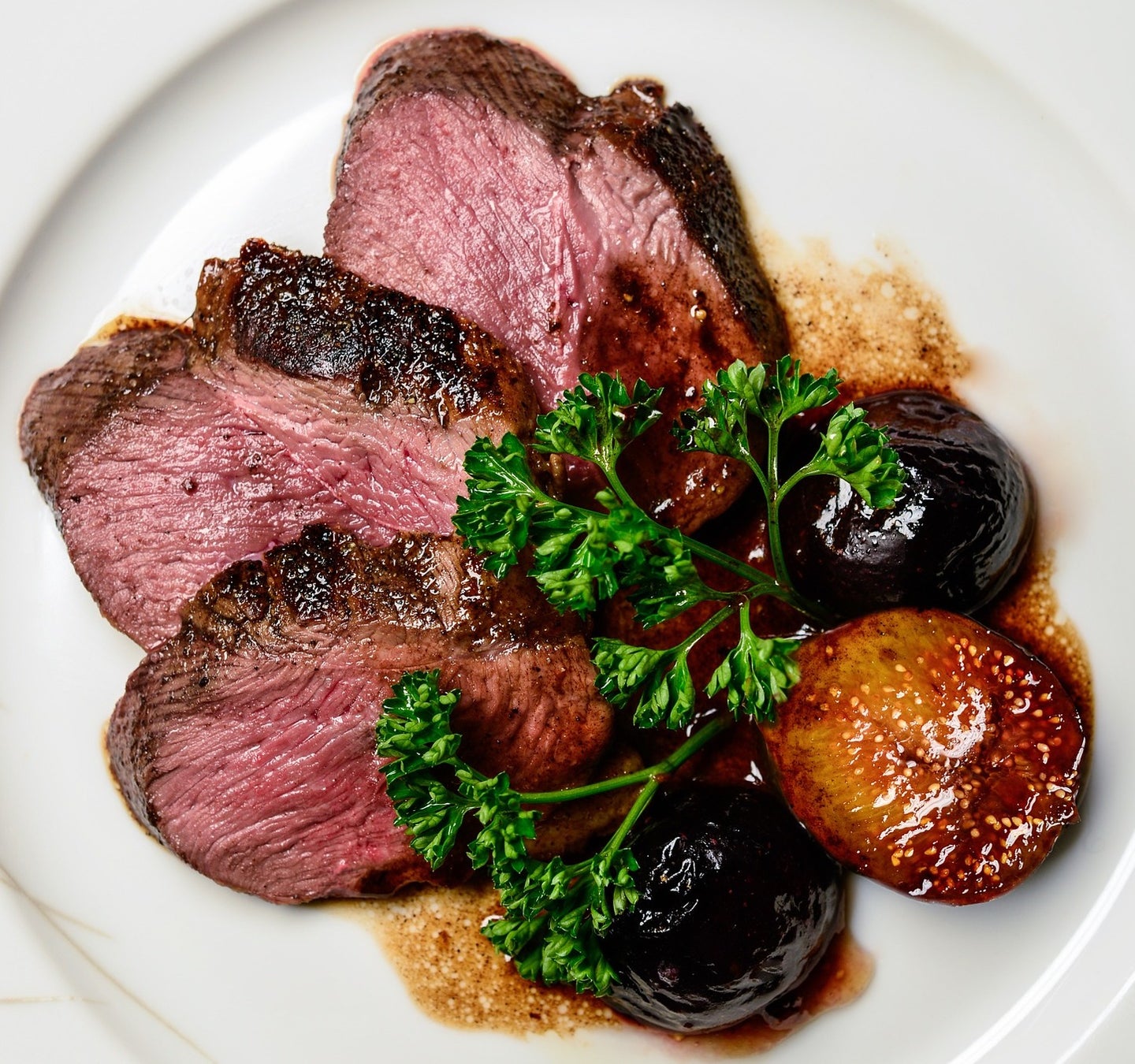 Getting a good sear on a duck breast is key. siala from Pixabay
SHARE

While it’s fun to play with the newest kitchen gadgets and trendy methods, developing tangible skills and intuition will carry you much further in the long run. Through technique and experience, you gain consistency and the ability to improvise, so you can cook anywhere, with anything, and still crush it. Here are a handful of cooking skills, tricks, and techniques you need to know.

1. Know the Right Knife Skills For Butchering and Prep Work

Knife skills are the backbone of cooking. This encompasses everything from understanding the differences between knives, knowing how to sharpen and care for them, how to cut vegetables, or butcher an animal. If you don’t know how to do things the right way, or even if you think you do, spend some time learning how the pros do the basics.

Assuming you’re at least capable of holding a knife without cutting yourself or others, learning how to butcher and process your animals from the field to the freezer is an invaluable set of knife skills for a hunter. The benefits of butchering your own game are numerous, but they basically boil down to more meat in your freezer and a better understanding of how to use it.

One of the main benefits is the variety of bone in and deboned cuts like roasts, loins, steaks that your local processor probably isn’t going to bother with—like Frenched racks of venison, crown roasts, chops, short ribs, flank steak, the list goes on.

Many of these awesome cuts usually end up ground into burger or summer sausage—not that there’s anything wrong with that. But having more options is generally a good thing. Butchering game yourself gives you the freedom and opportunity to push the limits of wild game cooking and find interesting ways to cook every useful bit of the animal. With one decent knife and a hand saw, you can do anything, and the more you refine your knife skills, the better you’ll eat and the less time you’ll spend butchering and cooking.

2. Learn How to Properly Sear Meat

Searing is undoubtedly the most important step of cooking meat, yet where people have the most trouble. A proper sear creates a scalded layer that prevents the meat’s natural juices from escaping. This browning is known as the Maillard reaction, and is a result of caramelization of amino acids and natural sugars. Not only does this create a vapor barrier, keeping your meat juicy and tender, but the seared exterior also forms a delicious crust, giving the meat added flavor and texture. Whether you’re cooking a hunk of backstrap, a duck breast, or even a rump roast that will be braised in the crock pot, start off with a proper sear.

Bad temperature regulation and overcrowding the pan or grill are usually to blame when a sear goes wrong. Start with a super hot pan or grill, cook in smaller batches, and wait for the crust to form before flipping the meat. Searing on all sides is important.

Actively monitoring the cooking surface is the key to a proper sear. For a pan sear, it’s important to let the fat guide you. Raise and lower the temperature of the pan to ride around the burn point of the oil, butter, or animal fat you are using as a searing medium. Keep the pan as hot as possible without burning the fat so you can get an even caramelization and avoid sticking. If the fat starts to turn black and smoke, back off the heat. If the meat isn’t browning and keeps sticking to the pan, crank it up.

For the grill, fat is generally not needed as a searing medium, but the general principles still apply. Dry rubs, especially those with a little brown sugar, help with the caramelization and go a long way in creating a beautiful, tasty sear. It’s generally best to avoid marinades for meat that will be pan seared due to the added moisture. But a grill can evaporate excess liquid fast enough to still allow a proper sear and crust to form.

Read Next: 7 Rules for the Greatest Venison Backstrap of Your Life

Braising is the go-to cooking technique for tough cuts you wouldn’t want to grill, roast, or pan sear. A braise is more or less a long, slow simmer in an enclosed container in which there is a liquid or sauce. While fatty game like ducks can be roasted, deer and other wild critters are often too lean for the dry indirect heat of an oven to yield anything worth eating for the majority of tough cuts. A slow, moist braise is the way to handle cuts like rump roasts, blade roasts, neck roasts, and shanks.

Often a braise begins with a good sear to the meat followed by the sauce being created in the pan before the vessel is covered and either placed in the oven or finished on the stove top. Low heat is applied over a period of several hours and the meat’s tough texture and connective tissues break down and tenderize.

As everything cooks, the natural juices, collagen, marrow, etc., from the meat and bones meld and infuse the sauce with flavor. A Dutch oven is arguably the best tool for braising, but oven-safe pots and pans, and even Crockpots and Instapots, will get the job done. Popular recipes such as osso buco, pot roast, brisket, etc., as well as most “pulled” or shredded meat recipes utilize braising as the main technique.

Wild game is generally cooked either very rare or to the point where the meat falls apart, and any in-between is usually a chewy mess for all but the most tender cuts. So if you want to nail that perfect rare backstrap or duck breast, you’ll need to learn to gauge temperature, preferably without poking holes in the meat. While probe thermometers are useful tools, you can learn to predict doneness extremely accurately just by feel.

Here’s a trick many professional cooks use on a daily basis:

Open and relax your weak side hand. Touch the pad on the weak hand where your thumb joins the hand with the pointer finger of your strong side. What you feel is comparable to a raw piece of meat. Now gently press your thumb to your pointer finger on the weak side hand and feel the pad again. This is roughly comparable to a rare piece of meat. Touch each finger to the thumb to go up the scale, so: pointer for rare, middle for medium-rare, ring for medium, and pinky for well done. Use this trick and you’ll have a pretty good idea what temperature your steaks, loins, and breasts are throughout the cooking process. Eventually, you’ll be able to know just by pressing on the meat as it cooks.

Another trick is to take a paper clip or pin and poke into the center of the meat, leave it there for a few seconds, then remove it and place the paper clip directly below your lower lip. If the clip is cold, the center is still rare, if it’s warm, the meat is around medium, and if it’s hot, the meat is cooked through. The hole from the paper clip is so small that any moisture loss is negligible.

If you do find yourself needing a thermometer, especially for large roasts and whole birds, these are the numbers to shoot for:

Few meals are complete without some sort of sauce to bring it all together. You want to be the person that can rummage through the cupboard or cooler and make something out of nothing. Maybe you forgot the good stuff at home, but you can still save dinner with a little know-how.

Nothing but some ketchup, bourbon, coffee, and sugar? No problem, we can make a barbecue sauce. Eggs, oil, and vinegar randomly kicking around? That’s mayonnaise, hollandaise, or a salad dressing. Do you know how to make a roux or a cornstarch slurry for thickening? What about a gravy from scratch? And you better be able to make a pan reduction if you’re going to call yourself a wild game cook.

Learning the basic blueprints for brown sauces, butter or cream sauces, emulsified sauces, tomato sauces, etc., will get you invited back to camp again and again, though you might get stuck doing more cooking than hunting.

Counterintuitively, the best way to learn to make a sauce is to screw it up, whether that means unbalanced flavors, the wrong viscosity, or an emulsion braking into a puddle of oil and eggy sludge. Understanding the steps and how each action affects the next will give you an intuition so you can get it right next time, or learn how to salvage the mess when things go wrong.