The Best Flies for Catching Panfish 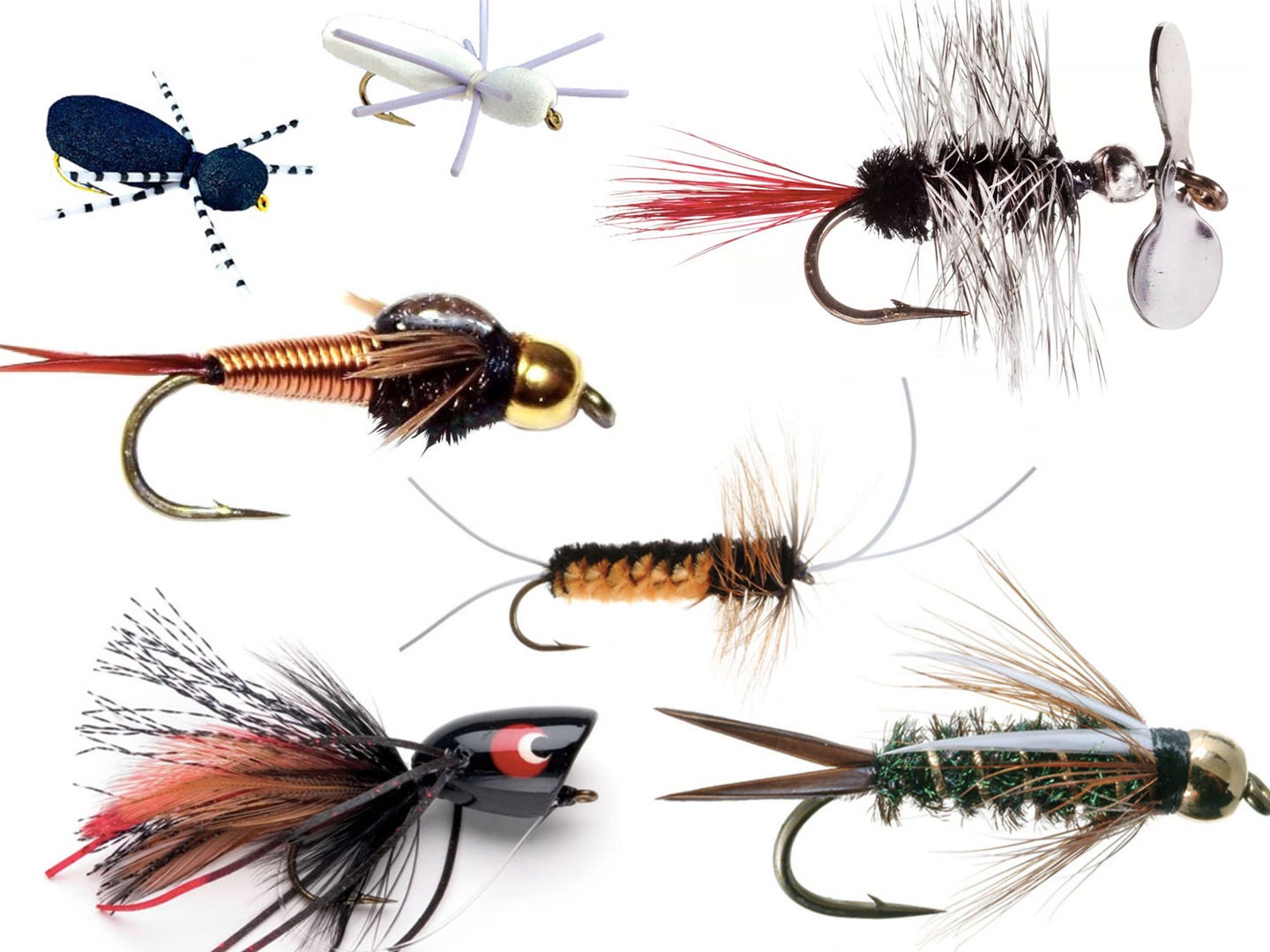 The panfish category is a catch-all class of fish that takes in bluegill, redbreast, redears, greens, longears, warmouth, perch, crappie, and possibly even rock bass—if by panfish you mean a fish that rarely grows so large it won’t fit in a skillet. Panfish in farm ponds, lake coves, and creeks and rivers are prime targets for fly anglers, especially in the pre-spawn and spawning periods that fall around the full moons of spring and early summer. Even when they’re posted up in deeper holes and creek channels, panfish will smack the right weighted nymph or attractor pattern, so this isn’t just a topwater game. And be ready. The biggest bass I ever caught—a 10-plus pounder, according to onlookers—took a size 8 white Woolly Bugger I was fishing around crappie structure.

A few colors and sizes of each of these flies will fit in a single fly box small enough to fit in your back pocket. Paired with a 3-weight or 4-weight fly rod, they’ll give you as much fun as you can have on a farm pond or local creek.

I don’t know if a foam spider is a spider at all, because it looks to me like it simulates everything from a big hopper to various beetles and even damselflies. What really matters is that panfish—and bluegill especially—will chomp a sponge arachnid even when the bite is slow. In the spring, when cold water can make for a sluggish bite, a subtle twitch-drag-rest retrieve can pry open fish jaws when no other fly produces. Later, as the water warms, a foam spider lands with a pleasing plop that’s not quite as obtrusive as a hard-bodied popper, and that subtle splat can make all the difference. Especially when bluegill follow flies without an eat, or nose-smack them without an open-mouth take, a foam spider can turn the tables.

And when the fishing is hot, an easy-to-cast, tough-as-nails foam spider can catch fish after fish without shredding. Load a flybox with black, orange, and chartreuse foamies to dial down on what works best for the available light and water clarity.

With its bead head and weighted metal-wire body, this depth-charge of a sinking nymph was developed by a Montana fly-tyer to drag down unweighted nymphs when fished in tandem. The thing simply looks delicious: The wrapped wire gives the abdomen a tantalizingly segmented look, there’s plenty of flash to simulate a beetle body, and the legs undulate with strike-inducing movement. A Copper John is a super choice when targeting panfish holding deep, and it’s a killer when used in moving water and conditions or when fish don’t have a lot of time to look over the fly.

Traditionally fished as a dropper under a floating bug, the Copper John can also be used as a heavy anchor fly that pulls an unweighted nymph deeper into the water column. Simply tie a smaller nymph to the end of your line, and drop a Copper John 18 inches below to pull the double rig to the depths. In the summer heat, after the panfish spawn has fish deep and sulking, a Copper John under a stout foam grasshopper is a one-two knockout punch to bluegill hanging tight along ledge drops and creek channels.

Another panfish fly borrowed from trout anglers, the Bitch Creek imitates a stonefly nymph crawling towards the water’s edge. The white rubber tail and antennae twitch enticingly as the belly flashes orange like a big stonefly. I don’t think a shellcracker knows a stonefly from a box of Cracker Jack, but deep-feeding panfish crunch on Bitch Creek nymphs like candy. The black-orange contrasting color scheme is definitely a big-fish attractor, and the fat, buggy profile looks like a 3-course perch meal in one chomp. These hefty flies are great for crayfish predators like warmouths and shellcrackers, and they really stand out when waters are stained a bit from a big spring rain.

The Wooly Worm is about as unsexy a fly as you can find, but this old-timer will simply stack up suspended bluegill. Its Woolly Bugger heritage is hard to miss, but it is heavily palmered and comes with a brightly colored—most commonly red—yarn tail instead of a long trailing sprig of marabou. Tied in dark colors, it might imitate a dragonfly nymph. In brighter colors, such as yellow and red, it’s definitely in the attractor-pattern column. Tied on a long-shank hook, a Wooly Worm is easy to twist out of the relatively small mouth of most panfish.

Nice and slow is the way to fish the Wooly Worm. It’s no darting baitfish or herky-jerky crawdad. Cast to the bank or tight to cover, and either bring it back slow and sultry with a hand-twist retrieve, or strip it in short 1- and 2-inch strips. Might as well go ahead and pre-heat the Fry Daddy.

This is the fly most people think of when they say, “bream bug.” Built most often of a painted cork body with guinea hackle, bream poppers come in at least forty-seven colors and feather schemes—solid colors, half-and-halfs, polka-dot patterns, frog patterns, and stripes—and with and without rubber legs. They all have their devotees, but I stick with the basics: black, white, and yellow. I keep a steady supply of various sizes, and I’ll switch up the profiles as well. Sometimes, farm pond bluegill prefer a cupped mouth with its gurgling action, but other times a pointed slider head seems to be the irresistible offering. I’ll even switch to a popper tied with spun deer hair when takes are tentative. Something about that squishy body entices a big spawny bluegill to hang on tight.

Poppers are so popular that they’re often the first fly an angler ties on when fishing for bream, no matter when. While they’ll definitely fool a bedding fish, they can make quite a fuss when they hit the water. Poppers are most effective when you need a bit of disturbance to key fish in to the lure. Cast tight to weedy cover, they’ll draw out hungry bluegill like nobody’s business. And one trick to fishing poppers effectively is to match tippet size to the profile and weight of the bug. Tippet that will turn over a No. 6 bumblebee popping bug will be way too stiff to fish a small No. 12 popping bug effectively. The fly will smack the water with all the finesse of a chunked rock.

Read Next: The 25 Greatest Flies of All Time

When panfish, such as crappie and perch, are on the feed, meaty minnows and shad are the target. Give them what they want with a Clouser minnow. Originally designed for smallmouth bass, small Clousers are easy to cast so you can cover a lot of water to key in on what fish are biting. With the heavy eyes tied close to the hook eye, Clousers dart and flash like small jigs, which crappie especially are fond of. Find or tie them on longshank hooks for easy retrieval, and Polar Flash bodies instead of bucktail. And cast them in the ugly stuff. Their hook-up profile in the water helps you probe weed edges and submerged tree tops with less chance of losing your lure. Go small with a size 12 Clouser in white and red. And the fact that Clousers are known for taking bass, both largemouth and smallmouth, means you’re always in the running for a bonus bucketmouth.

Part of the strategy of panfishing with a fly isn’t in matching the hatch, but matching the hunger of spring and summer fish on a heavy feed. That often means putting something in front of them that looks plump and sexy and flashy and worth chasing down. The Mackie Bug ticks off every category. The rubber tail and legs wiggle enticingly, a bit of flash in the head or abdomen helps fish track the fly though treetops and weed beds, and the pudgy belly must look like a triple cheeseburger to panfish. The fact that the Mackie Bug doesn’t look like anything a perch or bluegill has ever seen in real life doesn’t seem to matter at all. Run the fly below a large popping bug, and hang on.

When subsurface action shuts down, I size down to a beadhead Prince nymph fished under a small popping bug. The popper is little more than a strike indicator, for close-mouthed bream will often suck in a Prince nymph with a subtle take. The iridescent peacock shell casing and the contrasting white wings are certainly attention getters. But I think a bedding bluegill sees that sinking Prince nymph coming and coming and hits it out of pure aggravation, so a standard bead is often the ticket. For bottom-sulking panfish, and for deeply suspended fish in creek channels, a Prince Nymph with a tungsten beadhead dives deeper and faster.

The name puts it out there: This venerable wet fly standby stands tall as one of the most consistent bream flies ever. With rubber legs galore, a squirrel tail wing and a squishy chenille body, the bream killer looks like the love child between a hellgrammite and a tarantula. If you threw one on me, I’d have a full-on arachnophobic meltdown, but bluegill suck them down without a second thought and shellcrackers, especially, will whack a Bream Killer, possibly because those rubber legs have the shape and enticing twitchiness of a cricket. The squirrel hair traps air to make the Bream Killer sink slowly, so fish it with patience, with short sharp jerks occasionally to give the long rubber legs plenty of fish-attracting action.

Oh, boy. Here we go. The purists and haters are about to go nuts. The Pistol Pete is a pint-size prop bait with a tiny propeller on the front of the fly. Sort of like a Woolly Bugger meets a Devils Horse with a little Roostertail thrown in the mix. Is it a fly? I won’t judge. But a Pistol Pete will put a whipping on bream. For river and stream species such as redbreast sunfish, a Pistol Pete cast to the bank and swung downstream and across will suck trophy fish out of the shadows, along with redeye and other moving-water bass, plus whatever chain pickerel happen to be hanging around. Pistol Petes come in more than 50 different patterns and sizes, so you can fine-tune the offering to whatever works best in your waters. It’s not a long-range bait. On a fly rod at anything but medium-short distances, a Pistol Pete casts about as well as a wet cat. But get one of these Frankenflies in front of a bream, and it’s shore lunch time. And even the most highfalutin fly rodder won’t argue against a hot fried bluegill with a side of onions and potatoes.