Trout fishing in the fall isn’t always a sure thing, but these patterns can help 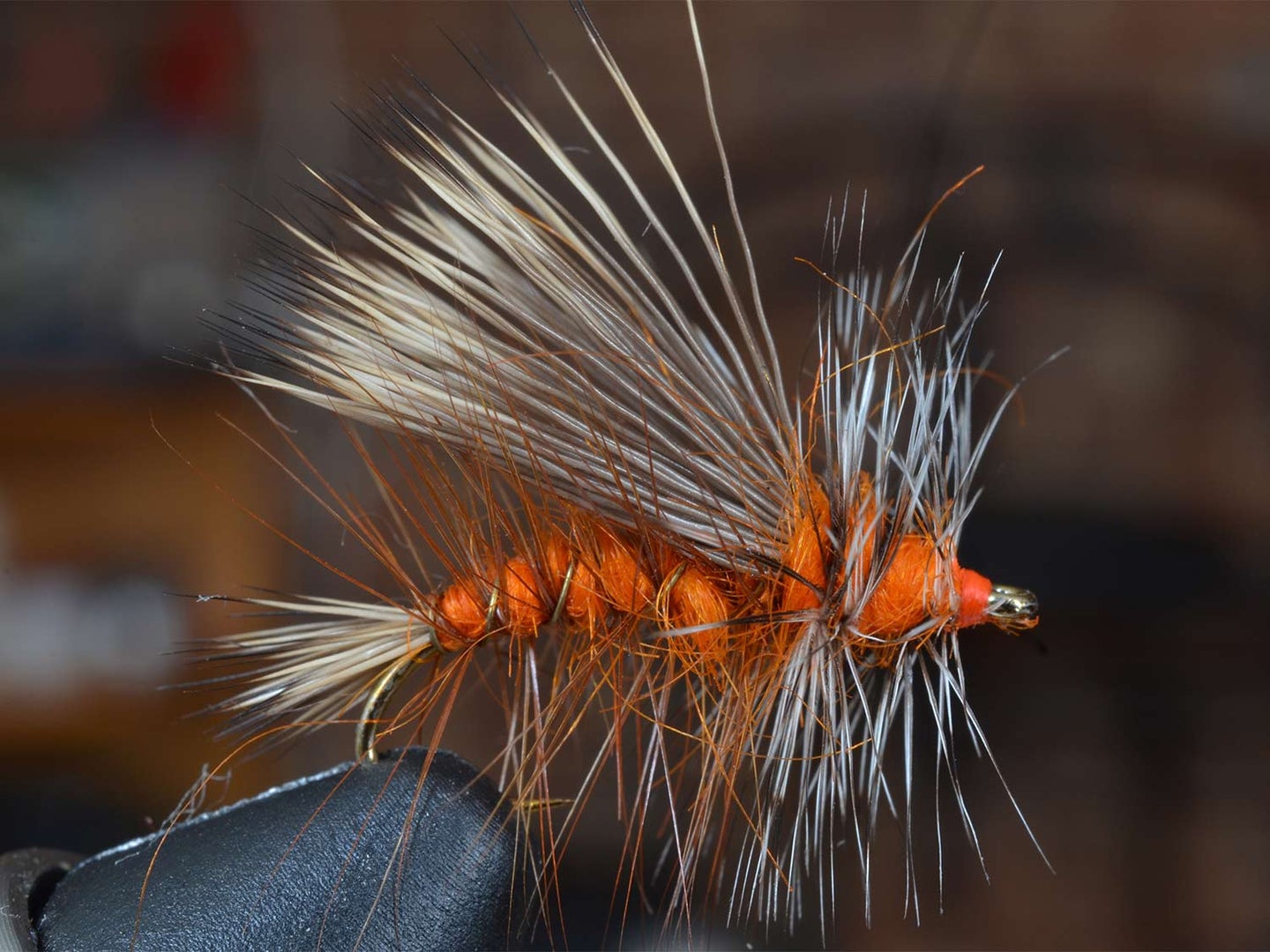 The Orange Stimulator is a solid choice when any of the species known as October caddis are on the water. Morgan Lyle
SHARE

Late fall trout fishing can be hit-or-miss. Fall streams might be skinny from the hot, dry summer, or blown out by autumn storms. Pools that produced in April or June might now seem empty, especially on waters that rely on spring stocking for their fish. And fall is a busy time—there are leaves to rake, pumpkins to carve, and deer rifles to zero.

But there are good reasons to fish between Columbus Day and Thanksgiving. Cooling water reinvigorates trout after months of hunkering down in tepid water. They feed well at this time of year, packing on weight that will get them through the lean months to come. And while insect activity is much less than in the spring and early summer, there are still a few species of mayflies, caddisflies, and midges that hatch in good numbers. Trout will often rise to them, and even when they don’t, you can be sure they are feeding on the nymphal stages of the insects below the surface. In fact, having fewer species on the water takes away some of the guesswork about which fly the fish are taking. A few patterns will cover most of the bugs you’re likely to encounter.

Fall is also the season streamer fishers dream about the rest of the year. Trout aren’t just hungry as the cool weather sets in—they’re also aggressive. Fall is spawning season for a number of species of trout and salmon; there are mates to woo and nests to guard. Small fish, and the streamers that imitate them, are at risk of attack by edgy adults. Swim a streamer deep in the pools and you may end up with your biggest trout of the year.

Finally, the shorter days of fall compress the fishing into civilized hours. You no longer need to wake up early to be on the water at first light, and you can fish until dusk and still be home in time for dinner. And unlike summer, the fishing is likely to stay good right throughout the day.

Here are a few patterns that should bring you some excitement in the late fall season. You’ll need to use fine leaders for the small ones, especially if fall rains haven’t swollen your streams from their summer lows. Larger dries and nymphs can be fished with average 9-foot leaders and 5x or 4x tippets. If you’re deploying streamers, keep your leaders short and stout.

As trout streams cool down through the 40s, dry-fly fishing tends to cool down, too. But if you’re on the right water on the right day, you may well have rising trout even though most of the trees have gone bare. Most of the mayfly action in mid to late fall involves that group of species collectively known as blue-winged olives. They range from small to really tiny, and the fish can be maddeningly selective about size. I prefer flush-floating flies in general, and especially with the little olives. Parachute-style dries present a great silhouette when seen from below, they always land right-side up, and their wing posts are relatively easy to see, even on the little 22s.

Down-wing spinner patterns are effective on any stream that has mayflies, all season long. The thinking is trout like spinners because they’re an easy meal, helplessly lying on the water at the end of their lives. Certainly they are useful during a spinner fall, but spinner patterns are considered a good general attractor pattern even when the naturals aren’t present. I think that’s down to being visible: the trout see the Rusty Spinner’s whole body and both wings flush in the surface film. You should have small ones for the autumn olives, and larger models for big bugs like Isonychia mayflies or for use as general searching flies.

Not all autumn dry-fly fishing involves mayflies. The October caddis (like the olives, a category, not a single species) is an eagerly anticipated emergence of hefty, ruddy caddisflies. You can use a suitable fly to match a hatch, or simply to prospect over likely-looking water; the wing tenting over a plump body makes for a universal attractor pattern that often inspires trout to rise. A simple fly with an orange body and a down-style deer-hair wing may be all you need, but this is a great time to cast a Stimulator, a beautiful and effective pattern you should have on hand anyway.

Dry-fly hope springs eternal, but the fact is you may not have rising trout in the fall. You will, however, have hungry fish. You’ll just have to go under the surface to get them. The Zug Bug is an old-fashioned nymph often thought of as particularly good for suggesting nymphs of Isonychia mayflies. The peacock herl body shows purplish-brownish-gray in the water, like the naturals, and it has a few features that sweeten its appeal: a shiny rib for segmentation and flash and a little wingcase that hints of the white stripe up the real nymph’s back. By the way, real Isonychia nymphs are good swimmers, so don’t feel restricted to the dead drift. Darting a Zug Bug or swinging it across the current can bring strikes, too.

Colorado fly-designer John Barr’s pattern may be the single most popular nymph of modern times among American anglers. This fly is a riot of strike triggers—the twin, pointy tails; the tapered, finely segmented, softly shiny abdomen; the fuzzy iridescent peacock herl thorax; the prominent hard wing case; the banded, wavy hackle fibers, and the bead itself. Use it in 18 or 20 if you think Blue-Winged Olive nymphs would be a good idea (and they usually are), and go larger to represent bigger bugs, or simply to offer the trout a substantial snack. It’s also good that the Copper John sinks fast. Nymphs are seldom effective drifting high above the trout’s head; Barr’s nymph makes it easy to put your fly at fish-level.

Fly-fishers (and writers) pay too little attention to the species collectively known as midges. They are found virtually everywhere—in lakes and ponds as well as rivers and creeks—and they make up a very large proportion of a trout’s diet, even in winter. Most are quite small, but fortunately they are well-imitated by simple patterns. Their pupae look like small, segmented worms, and the Zebra Midge, an Arizona pattern descended from English buzzer flies, imitates them beautifully. The heavy bead and slim profile allow the fly to sink quickly. Dead-drift it through pockets and pools, as close to the bottom as you can.

The Glo-Bug is one of many styles of flies designed to look like eggs that have spilled out of a trout or salmon’s spawning nest and gone adrift in the current. Brown and brook trout spawn in the fall, and trout of all species love to feed on their eggs. In fact, while egg patterns are mostly fished in the fall and winter, they work year-round. Trout instinctively understand the nutritional value of these little blobs of protein. It’s worth having a couple different sizes and colors, to suit the trout’s mood on any given day.

Yes, the Egg-Sucking Leech is just a Woolly Bugger with a colored bead at the head. The bead might be nothing more than a colorful curiosity to the trout. Still, the pattern’s original concept—a leech that’s been lucky enough to find a salmon egg to consume—seems plausible. In any case, it works everywhere, including on the hard-fished salmon and steelhead rivers of the Great Lakes region in October and November. The head can be made in different ways; orange or yellow chenille is common, as are plastic beads. This one uses orange craft yarn and thread for a slim-profile “egg,” with a couple of coats of UV-cured resin for durability and sheen.

Another John Barr design. With a tail and a collar of pine squirrel fur, this meaty streamer moves tantalizingly in the water. Its heavy tungsten cone and the lead wire substitute on its shank make sure the Slump Buster sinks quickly to where the big trout spend most of their time. There’s no wrong way to fish it. Cast upstream, let it sink, and “lead” it down to the target water on a tight line. Swing it across the current. Swim it around in deep holes. If all else fails, before you move to the next spot, just let it hang straight downstream, holding position in the current. If there’s a trout nearby, it might just strike out of sheer aggravation.

I got to meet the late Jack Gartside, inventor of the Soft-Hackle Streamer, a couple times at fly-fishing shows. I told him I considered this pattern my desert island fly. It is made almost entirely of supple marabou and therefore moves beautifully in the water. It presents a substantial profile in the water, but is literally light as a feather (ok, a feather and a hook), which makes it delightful to cast. The Soft-Hackle Streamer won’t sink as readily as a Slump Buster, but it’s a great choice in streams left shallow by dry summer weather.