Historic cold weather in Texas, plus a variety of other factors, is producing the perfect storm of trophy bass fishing 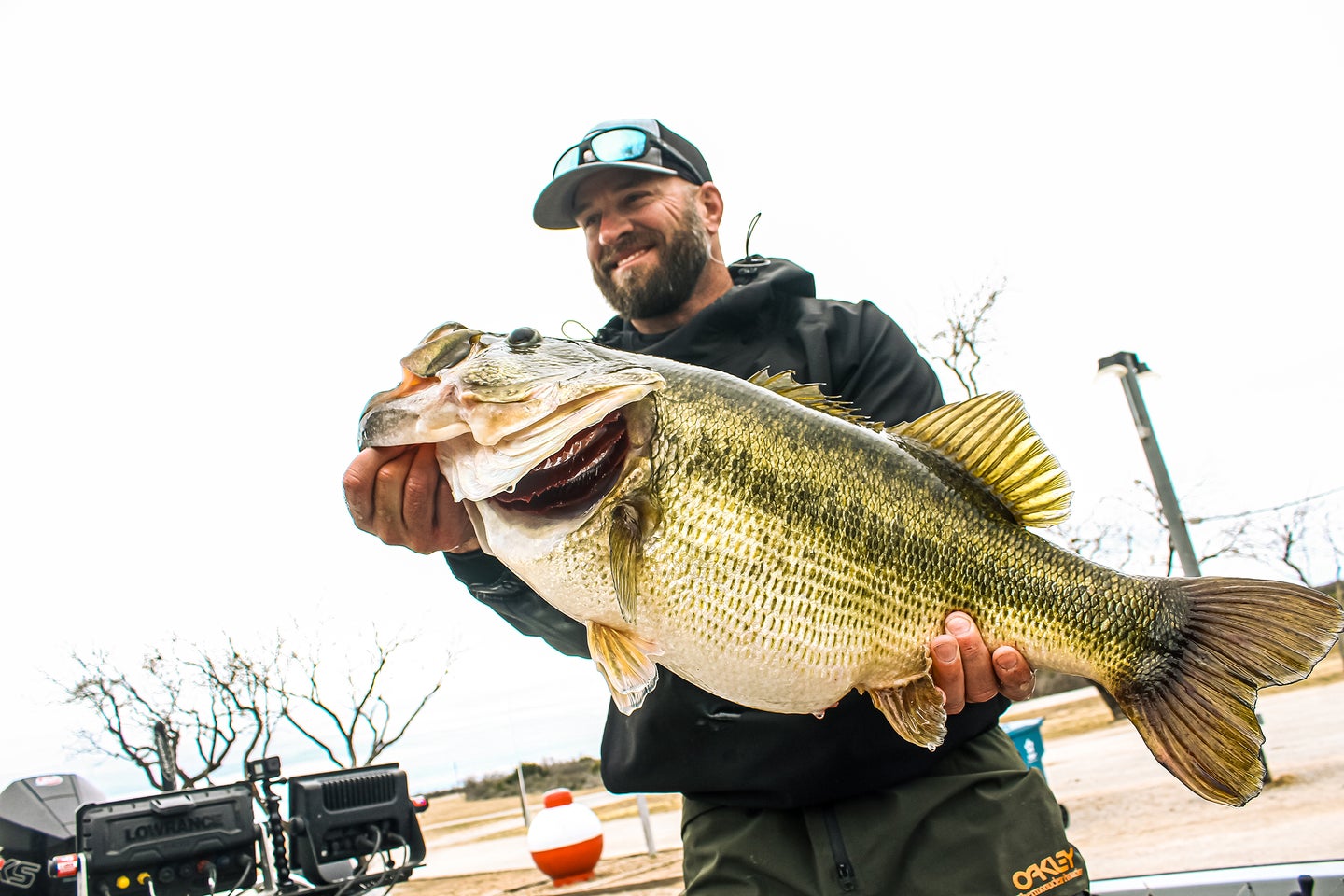 One of many massive largemouth bass landed in February at O.H. Ivie Lake. Kevin Baxter
SHARE

Kevin Baxter needed a wintertime fishing getaway, a chance to escape work, family obligations, and the frigid weather in his Kentucky hometown. Instead of a simple getaway, however, he stumbled onto what might’ve been the greatest week in trophy bass fishing history.

As he prepared to meet up with friends at Choke Canyon Reservoir in southeast Texas for a trip already postponed once due to winter conditions that caused power outages for much of the Lone Star State, he got new instructions: Head west young man.

In this case, “west” meant O.H. Ivie Lake, over 300 miles to the northwest. Not only did the new venue have trophy potential, but it had something even more important—open boat ramps that weren’t covered in ice.

On February 19, shortly before Baxter got there, Iowa angler Joe McKay caught a new lake record bass, a 16.40-pound brute. In a state where growing and catching big bass is just about as revered as high school football, it was the biggest one weighed in over two decades.

That alone would’ve been newsworthy, but two days later, Oklahoma angler Josh Jones landed a 13.20-pound bass from Ivie. Upon hearing that, Baxter might’ve mashed down the gas pedal on the truck a little harder. Then again, he might’ve been inconsolable, thinking he’d missed the window of opportunity, but by the time he arrived, the window had only opened wider. Three more bass in the 14-pound class came shortly thereafter, including one that Baxter netted for his friend Brett Cannon.

As of the time of this writing, Ivie produced six largemouths over 13 pounds in a mere 10 days. All of them were eligible for the highest echelon of the state’s ShareLunker program, established in 1986, which allows for teen-class fish to be “loaned” to the state’s fishery program in exchange for a number of prizes. The fish are then used to create a superclass of breeding stock for the public lakes. When it comes to building and sustaining trophy bass fisheries, Texas seems to have the formula wired.

Baxter, a keen observer of everything on the national bass scene, called it “the greatest non-tournament-related week in bass fishing history. We were just in the right place at the right time.”

Why O.H. Ivie Lake is the Greatest Bass-Fishing Lake in the Country Right Now

There are certainly many great largemouth trophy factories in Texas—including legendary lakes like Sam Rayburn, Falcon, and Amistad. But right now nothing else is in Ivie’s league. No Texas lake, or any lake in the country for that matter, has ever pumped out so many “teeners” in such a condensed period of time, and the word got out quickly. “The first day we were there, there might’ve been four other trailers in the parking lot,” Baxter says. “Three days later, there were at least 200 or 300.”

In the early 90s, there was a similar gold rush (or should it be called a “green rush”?) in southern California as lakes like Castaic and Casitas threatened to pump out a world record bass fattened up on stocked rainbow trout. But while that produced a couple of twenties, never were the giants caught in such quick succession.

So why did it happen? There are numerous theories and factors.

The first relates to the efforts of Texas Parks and Wildlife to build trophy fisheries through stocking and other management measures. “If you look at the stocking records, they stocked Florida bass at O.H. Ivie in the 90s, and then some of the offspring of the ShareLunker fish about 10 years ago or so,” says Gene Gilliland, a longtime fisheries biologist who now serves as the B.A.S.S. National Conservation Director. “The genetic testing will be done, and we’ll find out if they are in fact the offspring of the fish that were previously donated to the program. That’s the hope of that sort of selective breeding program. We’ve got to give Texas Parks and Wildlife a pat on the back—between the stocking and forage and length limits, they know how to produce trophy fish.”

The stocking program’s success might tell the complete story, if not for another truth—as the teen-class largemouths showed up one after another, so too did a series of unusually-sized O.H. Ivie smallmouths. Ben Milliken, another associate of the 6th Sense crew, caught a 6.6-pounder on February 22nd, fresh on the heels of a 6.25-pound smallmouth caught two days earlier and just before a 6.8-pounder caught two days later.

That’s three records in four days—not even enough time for the certificates to be mailed. Later, a smallmouth that weighed over 7-pounds was landed from Jones’ boat. It’s still unclear whether it was a pure smallmouth or a smallmouth hybrid (it would be a record either way), but no matter which category it falls into, it wasn’t a ShareLunker offspring.

What’s the Science Behind These Monster Fish?

Lynn Wright, the Supervising Fisheries Biologist for the San Angelo District Office, suggests another factor contributing to the huge fish: “New lake effect.” Ivie had been in desperate need of water for many years and had shrunk to just over a quarter of full pool. Then the rains came in the Fall of 2018, and “the lake came up 30 vertical feet and went from 5,000 acres to 15,000 acres,” Wright says. During the dry years, salt cedars and terrestrial vegetation had grown all over the dry spaces, producing “10,000 acres of solid habitat.”

“I was expecting to see fishing pick up, but I probably didn’t expect it to happen this quickly,” Wright says. “Everything seems to be taking advantage of all of this new space.”

But if new lake effect were to explain it all, how would you understand what went on elsewhere throughout the state that week? During a Big Bass Tour tournament on Lake Conroe, north of Houston, Scott Stephens weighed in a 14.25-pound brute, for which he earned a fully-rigged bass boat. Trace Jansen set a new lake record at Travis, with a 15.32-pounder. It literally seemed like a pot of green gold at the end of every rainbow.

That might lead one to believe that the historic cold snap had a role to play in it. The biologists suspect that it might have put a thumb on the scales, so to speak, but they haven’t found any conclusive evidence.

The largemouths in question were Florida-strain fish, which “tend to be more sensitive to cold” than their Northern-strain cousins, Gilliland says, but eventually they have to eat.

A bigger factor was likely the fact that Texas essentially shut down for longer than ever before. “People were itching to get out,” says Gilliland. “Here in Oklahoma we went from 14 below to 70 degrees, and it did something similar in Texas, although maybe not quite as extreme.” By the time it did finally warm back up, anglers came out in force, increasing pressure on the fish at a time when they are potentially most vulnerable. Had this happened in November or December, we might not have seen the same impact, but at this time of year, bass hormones start flowing as big fish prepare for the spawn. These fish are active and bursting at the seams, and they need sustenance to prepare for the most physically stressful effort of their lives.

Read Next: The Pro’s Top 10 Baits For Spawning Bass

One other factor that pushed this succession of giants into the limelight was that it happened in 2021 rather than 2011. Social media helped spread the word about how good the fishing was, and the increased use of new technology like forward-looking sonar units enabled anglers to target individual fish like hunters after a trophy buck.

At certain times of year—like now—there are entire populations of fish that have historically suspended offshore, or in deep flooded timber, and have been essentially undiscoverable or uncatchable. Now, with technology like Garmin’s LiveScope and Lowrance’s LiveSight, it’s easier to target them.

That’s how many of the recent ShareLunkers were caught, primarily by using Alabama Rigs as well. It’s the same technology that Bassmaster pro, Patrick Walters used (minus the A-Rig) last fall to dominate the Toyota Bassmaster Texas Fest at Lake Fork in areas and on a pattern that few reading the traditional “textbook” would have thought to be viable.

As for Wright, he’s spending lots of time in a truck, transporting ShareLunker candidates halfway to Athens, where he meets the representatives of the Texas Freshwater Fisheries Center to hand over the precious cargo. He has plenty of road miles to ponder the historic sequence of events in which he’s playing an integral role.

“I’ve been working weekends and finally catching up on my other work,” he says. “No time to fish, and I’m OK with that. Our job is to make fishing better. Nothing makes me happier than seeing a parking lot full of trailers.”