Is This Lake the Best New Bass Fishing Spot in Mexico? 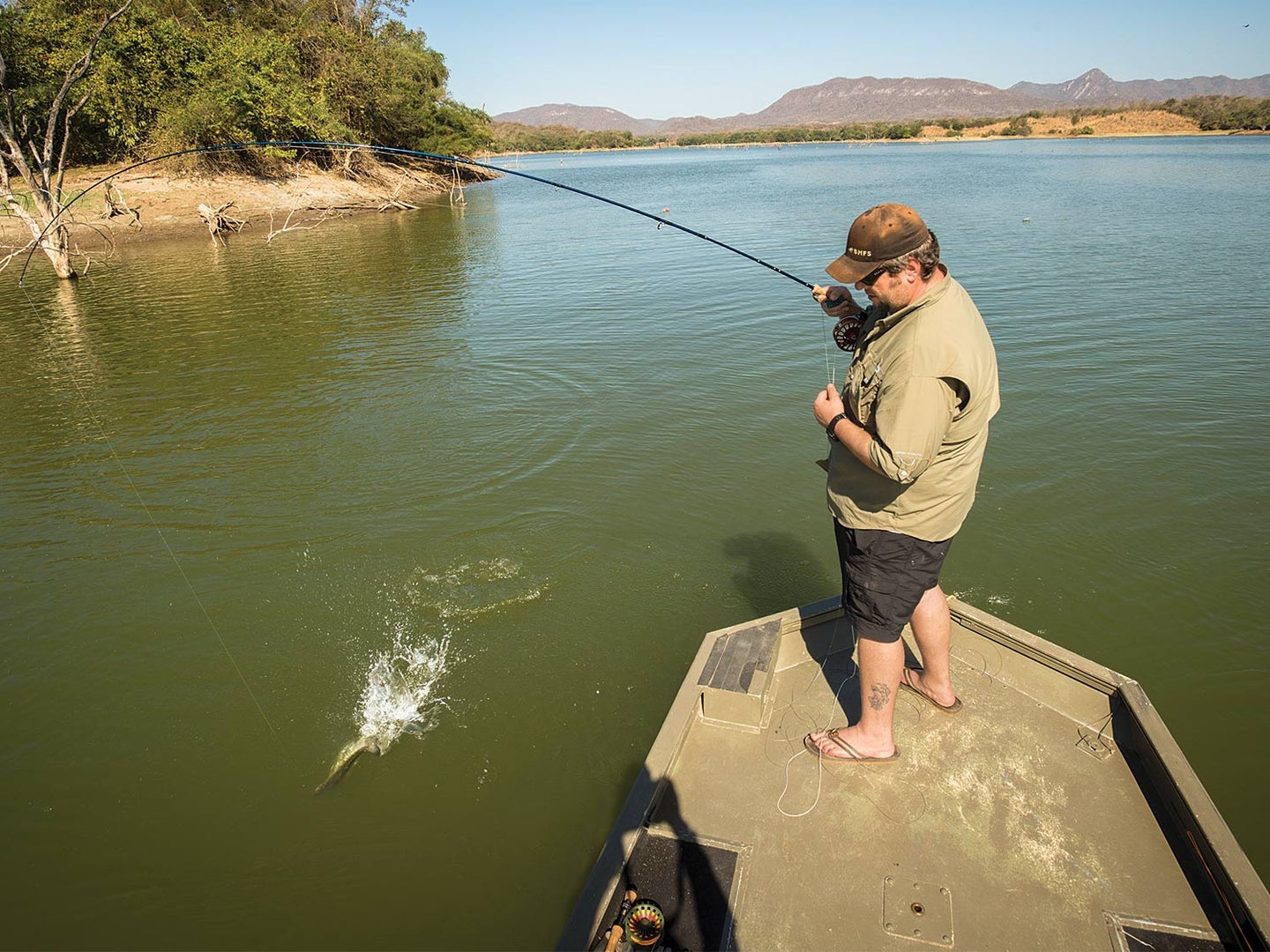 He had introduced himself as Diablo. We were sure it was a nickname, but given the language barrier, getting to a real nombre seemed unlikely. Or necessary. The devil it was. He couldn’t have been older than 25, and his English was sparse, but every time I opened my streamer box, quiet Diablo pointed to a handful of Clouser Minnows stuck in the corner, mostly hidden by the hair, flash, and plumage of much bigger, fancier, more modern flies.

“This fly is very good, sir,” he would mutter through the blue Buff protecting his face from the blazing sun.

The problem was that my old friend Tim Romano and I didn’t come to Mexico to throw Clousers. Part of the reason we were invited to Lake Picachos in the first place was to see what two devout streamer junkies fluent in the new meat-fly world order could produce on what’s being touted as Mexico’s next great largemouth fishery. Clousers, in our minds, were numbers flies, not size flies. Those same minds, subsequently, had been wondering for a full day and a half why our 6-inch Drunk & Disorderlies, Hog Snares, and Manbear Pigs were failing to produce heavy bass along the miles of juicy, structure-rich shoreline on this 38-square-mile impoundment of the Presidio River. After releasing our 50th 2-pounder, it was Romano who finally advised listening to our guide. I begrudgingly tied on a blue-and-white Clouser, and on the fifth retrieve, that little fly was stopped dead. When the 41⁄2-pounder jumped, quiet Diablo suddenly got loud. “Yes, sir! C’mon, sir!” That fish would be the true kickoff to a trip Romano and I both earned and needed.

There are 13 years of friendship and 1,800 miles between me and Romano. We have the best intentions of meeting up annually, but getting a Jersey boy and a Colorado kid together isn’t easy. When we do join forces, the trip is always memorable, though usually for the wrong reasons. There was the time our smallmouth dreams were shattered on Lake Havasu by three days of 50 mph winds. There was the time we were nearly trampled to death by an ornery moose on the Colorado River. There was the urban carp mission that put us in a Phoenix motel with bloodstains on the carpet. The locals hanging out in the parking lot scared us so badly, I felt the need to wedge a chair under the doorknob before going to sleep. There was the cold snap during the weeklong Minnesota trip that produced zero muskies on the fly. We were so used to struggling to some degree when we got together that pulling up to the Anglers Inn at Picachos and being handed a margarita the second we got out of the van just felt wrong.

To get here, we had both escaped miserable February weather in the Northeast and the Rockies. The head cold I boarded with in Philadelphia eight hours earlier seemed to evaporate when I stepped out of the airport in Mazatlan. I could breathe again. The hour drive from the city across the Sinaloa countryside took us through small towns with brightly colored houses and taquerias and green trees that made the icy, drab gray of home feel worlds away. Our driver stopped at a bend on a ridge as Picachos came into view—vast, shimmering blue, and tranquil.

The Presidio River was only dammed in 2009, which makes Picachos a “new” lake. When it was created, Billy Chapman Jr.—the godfather of Mexican bass fishing—saw an opportunity. He had spent decades turning Lake El Salto 110 miles to the north into a largemouth paradise. The ­Florida-​strain bass he stocked so many years before had flourished, making El Salto one of the top destinations in the world to catch a 10-plus-pounder. With his connections and a framework for creating bass fisheries already in place, Chapman began stocking Picachos soon after it was dammed, the goal being to establish a sister lake to El Salto closer to Mazatlan. When Romano and I showed up, Picachos hadn’t kicked out any double digits yet, but nearly 10 years after the initial stocking, 7- and 8-​­pounders were getting more common. Picachos is also shallower than El Salto, making it much more fly-friendly. Chapman, eager to promote his new baby as a destination for long-rodders, rolled out the red carpet for us. It was a much nicer shade of red than the one in that Phoenix motel.

I’m not a largemouth guy. At home, in warmer months, the majority of the green bass I catch just happen to beat a snakehead to my frog, or a pickerel to my jerkbait. If I do go after them specifically, it’s usually at a farm pond with a 7-weight and a big hair popper. Local options in February, of course, consist of walleyes you’ll barely feel bite a jig or trout you’ll barely feel hit a nymph, so four days of sun and largemouths—or “Larrys,” as Romano and I call them—sounded perfect. Romano is a largemouth freak. Closet variety, though. His reputation as a trout fly guy is pretty well established, but when no one’s looking, he’s at the pond with a bag of Senkos. I think, deep down, he wouldn’t have been upset about having a few baitcasters on the boat, but we were fully committed to flies, and not long after shaking hands with the devil, we were chugging foam poppers through a field of flooded timber, waiting for the first boom.

But the boom wasn’t really coming. Going someplace warm in winter can be a mental trap. You’re wearing flip-flops and drinking piña coladas, so your brain thinks it’s summer. It’s not, and warmth aside, the fish in Picachos were still in a winter, pre-spawn pattern. When we asked Diablo about poppers, he just said, “You can try, sir.” His job wasn’t to argue with the gringos. His job was to politely suggest a Clouser. What he knew, which our go-big-or-go-home selves wouldn’t figure out until just before lunch the next day, was that the heavier bass were holding deeper around the bases of the trees and along steep bank drops. They weren’t chowing the plentiful tilapia in the lake as much as smaller baitfish and shad. Solid topwater action now revolved around being lucky enough to encounter a school of bait on the surface getting hammered. But without that good fortune, you had to get a fly right in their faces to get them to move. Once we finally conceded to smaller flies and traded floating lines for sink tips, the right bass started moving.

By our last day, we had established a milk run with Diablo. There was a series of rocky points that sloped off to deeper water, some of which produced in the morning, and others late in the day. With a Clouser or small Mushmouth-style shad pattern on the end of our sinking lines, we’d cast to the point, let the line sink for a few seconds, and slow-strip back, allowing the fly to follow the bottom contour. The hit was little more than a tick, but when you set, it was like stripping into a cinder block. It’s been said—many times by me—that largemouths don’t fight. The Florida-strain bass in Picachos changed my mind. They’d shoot up from 10 feet below, go aerial, crash down, and zip right back to the bottom. All of the fish in the 4- to 5-pound range had us dancing around the boat, dipping our rods in the water to quickly compensate for sudden bursts of speed. That ­final afternoon, having just set up on a point within eyeshot of several mausoleums that had been flooded when the lake was created, I focused on Romano’s line as he made the first presentation. We had gone from struggling at the hands of our own stubbornness to so dialed that we could practically count down to a bite. Three. Two. One. I saw the line jolt forward where it met the surface. Romano leaned in, and the rod folded.

“They’re still here,” he said. “There has to be just a massive pile of bass down there. I can’t think of anywhere at home where you could catch this many largies on the fly.”

I raised the cold Pacifico I was nursing in agreement. For the first time during any trip I’d been on with Romano, we’d hit a point where we couldn’t ask any more of the fish. Or the weather. Or the hospitality. As another potbellied 4-pounder burst up from the depths, Diablo let out the same fiery “Woooo!” he’d belted out for every fish we’d hooked of this caliber. We may not have been able to carry on a conversation with him, but it was clear our heads were all in the same place by the time the sun began to set over the lake. We didn’t need words to express the fact that we’d come together as a team—Diablo putting us on the fish, and Romano and I finally understanding that “Clouser” meant more than a fly. “Clouser” meant get deep. It meant these fish aren’t looking for big meals. It meant keep it simple, stupid.

Keeping it simple is what led to the most fun, stress-free trip Romano and I have been on together. We weren’t hiking 3 miles into a treacherous canyon, looking for carp in a sketchy neighborhood, or beating ourselves to death hunting a fish that eats once a week. I don’t think we’ll ever stop teaming up for the weirder and wilder. Our love of the odd and the long shot is what has made us such good friends, but effort comes in many forms. For a better appreciation of the long-shot victories, sometimes the smartest effort you can put in is to get where the fish chew, drinks are included, and the only thing to lose sleep over is the ­anticipation of the next morning.

The Casa that Chapman Built

A member of the Fresh Water Fishing Hall of Fame, Billy Chapman Jr. was a pioneer in establishing full-service lodge operations in the Amazon for peacock bass, and in Mexico for largemouths. As it goes with all his properties, Anglers Inn at Lake Picachos provides top-shelf accommodations, food, and service. Many anglers are likely familiar with his lodge on Lake El Salto, where double-digit bass are common. Although Picachos is a relatively new fishery that is still growing, having fished both locations, I see advantages to Picachos. At present, this impoundment is an incredible numbers fishery, so if your goal is to simply bend rods from start to finish (or maybe you’re bringing the kids), Picachos won’t disappoint. Because it’s a fairly shallow lake, I found the fish to be very reactionary, which also makes Picachos better for fly guys. Catching large bass at El Salto often requires more technical skills, such as flipping or slowly working plastics around deep cover. You can take a deeper dive into each lake and figure out which one will scratch your bass itch best at anglersinn.com.